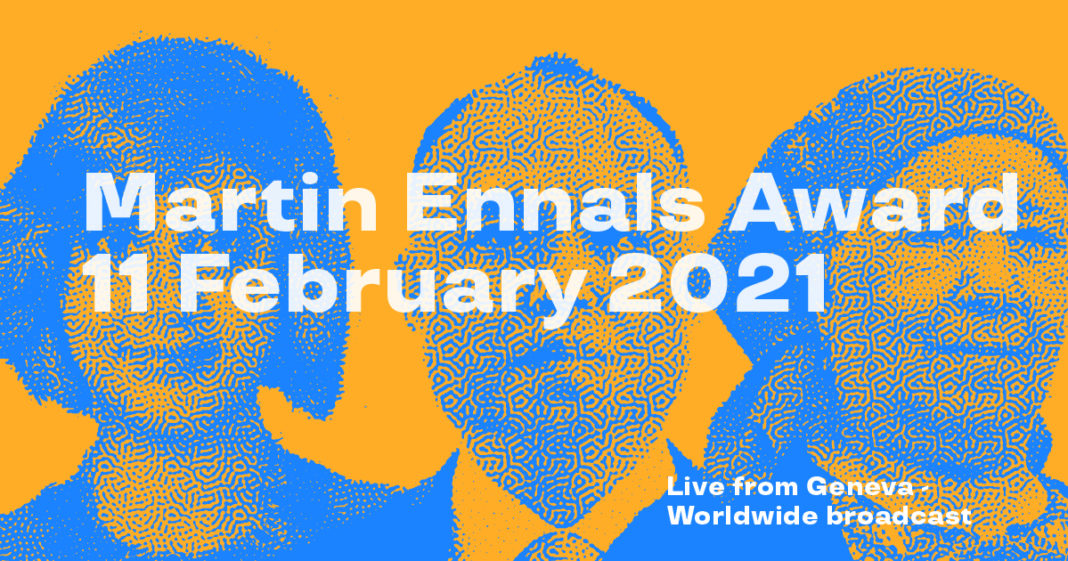 Updated: 1850 Hours. Thursday, 11 February, 2021. The Awards ceremony, including profile videos of the three finalists, can be watched HERE.

Agent Provocateur is Global Geneva’s op-ed column for quality and well-sourced opinion. For further information on how to follow the Martin Ennals Awards in livestream, please go to: Martin Ennals Foundation.

Hearing the tales of courage and bravery from ordinary people fighting for their rights, it is difficult not to feel roused. One of the more inspirational experiences for me was meeting with Abdul Aziz Muhamat, the 2019 Award Laureate. Aziz is originally from Darfur, but he spent five years in an Australian detention center for asylum seekers on Manus Island in Papua New Guinea. His zeal and persistence were commendable, but what impressed me more was his optimism that he could make the world a better place.

It is essential that we honour human rights, not just as Genevans, living in the ‘capital of human rights’, but as human beings. More so this year, when under the garb of public health measures, human rights are under pressure in many parts of the world. Although we’ve made much progress, all too often the ones standing up for our freedoms and rights are brutally repressed with intimidation, detention, torture, and even death sentences. They are lawyers, teachers, journalists, workers, who ended up on the wrong side of those in power, for daring to raise their voice or demand accountability, or justice, or equality.

Why it is important to recognize human rights defenders

That is why the mandate of the Martin Ennals Foundation is unique. Since its very inception almost thirty years ago, the Foundation has strived to celebrate these exceptional individuals. The very first human rights defender who won the Award in 1994 was Harry Wu from China, who was the first to unveil the Chinese concentration camp system and reveal it to the world. Since then, we have presented the Award to other fearless individuals who challenge the status quo.

A reminder: Global Insights Magazine and our non-profit Global Geneva Group seek to make quality journalism and our Youth Writes education initiative available for free worldwide in the public interest. If you like what we do, please become a Support Member.

While it isn’t practically possible to award every single human rights defender, the independent Jury of the Martin Ennals Award selects every year, through a very rigorous nomination process, three Defenders at risk. The Award itself isn’t limited to a once-a-year ceremony but is used to amplify the advocacy of our Defenders, to help them form networks in Geneva and beyond, and to connect them with other human rights Defenders who might have shared experiences.

This year, despite the pandemic, we are going forward with the celebration of the three outstanding Finalists selected by the Jury. They come from different backgrounds, professions, and cultural contexts, but share the unfortunate commonality of conducting their human rights work in authoritarian countries.

Take Soltan Achilova, whose only weapon in the battle to expose the struggles of her people is a simple camera. As a photojournalist in Turkmenistan, a country that ranks 178th out of 180 in the World Press Freedom Index, she faces enormous risk for her independent and free reporting. Soltan, and her family are a frequent target for the security forces. The police have on multiple occasions detained and attacked her for reporting independently on the social issues affecting the Turkmen people. Soltan’s own son committed suicide under the regime’s pressure. None of this was enough to stop her. As a fierce and outspoken Defender, she’d tell you about her struggles herself. But at the moment, she is cut off from the internet and prohibited from leaving the country.

Our Jury Members have also nominated Loujain al-Hathloul, a fierce woman human rights defender in arguably one of the world’s most repressive states. In Saudi Arabia, a woman cannot travel abroad or apply for a passport without the permission of her ‘male guardian’. Until 2018, women were also not permitted to drive. Loujain was detained for attempting to reform these aspects of the law and society which stood in the way of the rights of women and girls. Since her detention in 2018, Loujain has been tortured, put in solitary confinement, denied access to legal counsel, and labeled as a “terrorist” by a special criminal court. Her family keeps urging for her unconditional release because they know she has done no wrong.

Finally, the third Finalist is Yu Wensheng, a lawyer from China. Yu was just another corporate lawyer in a fast-rising Chinese economy. But when he decided to take on human rights cases and ask for constitutional reform in his country, he drew the ire of one of the most powerful regimes in the world. Yu has been detained, harassed, and convicted in secret. While in custody, he has been tortured and denied medical care and family visits. His wife, Xu Yan, who Yu has not seen in person for 3 years, herself has become an icon. She has taken up the mantel of human rights defense and is currently studying law. Yu’s fight for due process has completely upended his life.

The goal of the Martin Ennals Award for Human Rights Defenders with the nomination of the Finalists is to put the spotlight on human rights when and where they are repressed and to denounce the tactics used to do so by the states or authorities involved, to bring Defenders to light when they are in danger, so that no one is unaware of the perils they face, and thus to strengthen their protection under the watchful eye of the international community.

It is particularly important to instill a sense of confidence in our Finalists, to make them feel they are not alone in their fight for freedoms and rights, because it is also our freedoms and rights. This year’s Finalists have taken a long and hard road, full of challenges and pain. As Genevans, as citizens of a city that believes in the human rights of everyone, but above all as fellow human beings, we consider it our responsibility to stand firmly with Soltan Achilova, Loujain al-Hathloul and Yu Wensheng, as we did for all of the previous Laureates of the Award.

Philippe Currat is a Geneva-based lawyer and Chair of the Martin Ennals Foundation. For further information: nfo@martinennalsaward.org