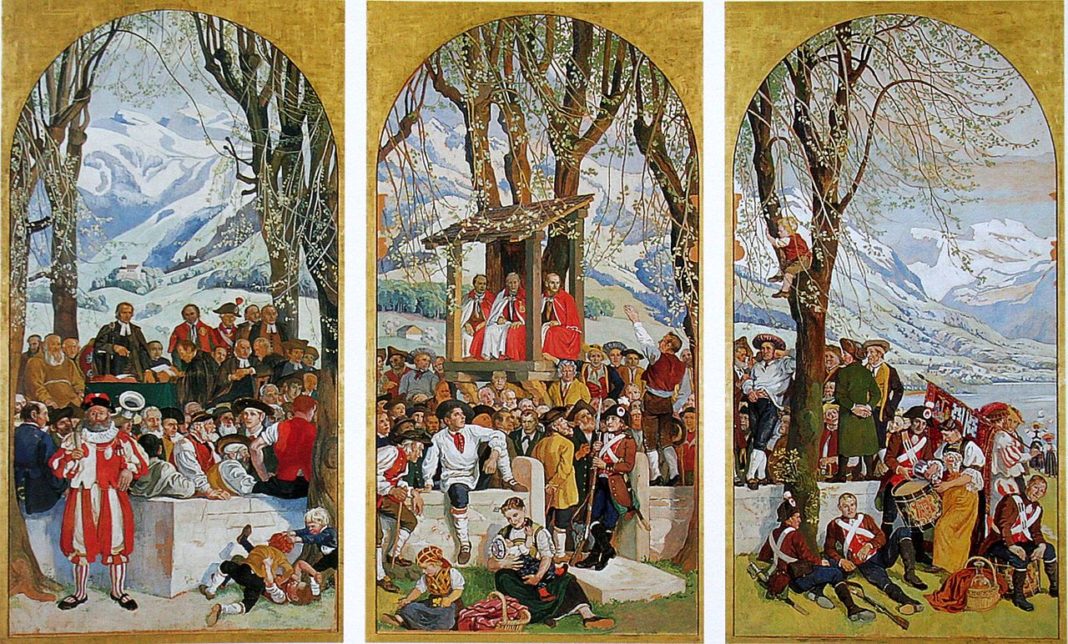 In the Council of States, one of the two chambers of the Swiss parliament in Bern, one wall is dominated by a fresco in five panels. Die Landsgemeinde by Albert Welti was completed between 1907 and 1914. It depicts an open-air assembly of citizens in a Swiss village gathered to debate and vote, a political entity that dates back to the Middle Ages.

In soft yellows and reds with the Alps in the background, some 150 figures in eighteenth century dress participate in the business of the day. When I first saw that painting, I was immediately struck by the absence of women. The handful of women portrayed are on the fringes of the meeting with children clinging to their skirts. They are not involved, and their voting rights lie far in the future.

It was not until 1971 that the first solitary woman entered the wood-panelled chamber of the Council of States as an elected representative and took her place below the fresco alongside 41 male parliamentarians. Her name was Lise Girardin and she was also the first woman mayor of Geneva, elected to that post in 1968. An exceptional woman by any definition.

On February 7 this year, Switzerland marks 50 years federal voting rights for women, and the right to run for office at federal level. It is difficult to strike the right tone for the anniversary. Some voices call for an apology for this historical injustice, while others see it as a moment to celebrate how much women’s lives have changed for the better.

But before we look at progress, we have to give due recognition to the long road travelled by Swiss suffragettes, beginning in 1868 when the first Zurich women anonymously called for the right to vote on cantonal level. While Welti was painting his masterpiece, a number of associations for women’s suffrage came together to form the Swiss Association for Women’s Suffrage (ASSF) in 1909.

Never let it be said that Swiss women didn’t ask for the vote before 1971. They asked and asked, decade after decade, trying many different approaches, but they were always met with implacable male resistance.

Switzerland is a bottom-heavy democracy with more power vested in voters than in parliament. Through the direct democracy system of popular initiatives and referendums, Swiss voters can introduce laws and overturn them. They truly have the last word.

And yet, for much of its long history, Swiss democracy had this fatal flaw. It excluded women by definition, with voting rights enshrined in the 1848 constitution using the male word for citizen voter. Switzerland was a people of brothers – ein Volk von Brüdern – and the only way to change that reality was to appeal to the generosity of those brothers.

Women’s suffrage campaigners had to fight on many different fronts, pushing for the vote at communal, cantonal and federal level. They collected signatures, their allies submitted parliamentary motions, they organised protests and endless meetings, wrote books and articles, and even tried to make the legal argument that the male word for voter in the constitution – Stimmbürger – should be treated as gender neutral. All to no avail.

The 1950s finally presented a chance for women to be granted the vote on federal level, when there was an outcry about government plans to compel women to do a form of national service. The referendum on 1 February 1959 was rejected by a majority of 67 per cent.

My novel, Voting Day, is set on the day of the 1959 vote. It tells the story of four women in very different circumstances whose lives are connected by the fate of a foster child. Only one of the characters, Beatrice, is politically active and she makes the observation about the absence of women in the Albert Welti painting.

Part of the inspiration for the book came from the writings of Iris von Roten, whose 1958 book Frauen im Laufgitter (Women in the Playpen) caused her to be vilified by the male establishment and even by many in the women’s rights movement. She did that fateful thing they had been trying to avoid; she upset the men.

In Von Roten’s words: “Although the oppression of women in economic-professional and sexual lives is mostly camouflaged by all kinds of placatory rationalisations, it is completely undisguised in political life. The exclusion of women from political life in an otherwise democratic state displays it particularly blatantly.”

Through Von Roten’s forensic analysis (she was a lawyer) of Swiss society, she wanted to advance the debate with solid evidence, in the hope of changing hearts and minds. Instead, the debate was almost shut down and Von Roten effectively withdrew from public life.

Reform doesn’t always come from within. It is worth noting that there was an outside catalyst for the next, successful referendum in 1971 in the form of the European Convention on Human Rights. The convention dated from 1953 and by 1968 the Federal Council (Swiss government) was keen to sign, just without accepting the clause concerning women’s political rights.

This ridiculous prospect galvanised the upcoming more radical generation of the women’s movement, giving them enough fresh outrage to persuade the government to deliver a new referendum. Times were changing. Finally, the two-thirds majority against the women’s vote 12 years before became a two-thirds majority in favour in 1971.

With that, the real work of building an equal society could begin.

Clare O’Dea is an Irish-Swiss author and journalist based in Fribourg. Her debut novel, Voting Day, is set on the day of the 1959 referendum and tells the story of four Swiss women making their way in a profoundly unequal society. Published in February 2021, it is also available in French, German and Italian. Voting Day – Bergli

Critical views of what remains, 50 years after Swiss women got the vote: they ‘remain excluded’ — thelocal — 7 February 2021