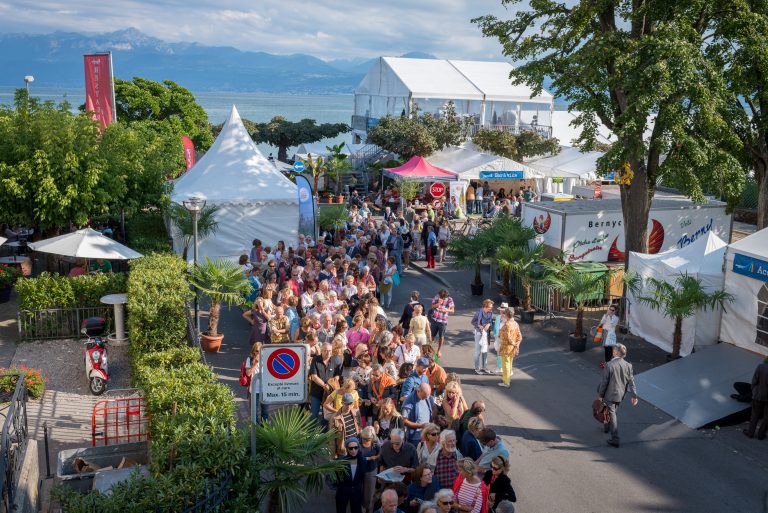 This article was first published in the Oct/Nov. 2017 print and edition of Global Geneva magazine.

Even if you don’t live or work in Switzerland, the three authors – Diccon Bewes, Clare O’Dea and Padraig Rooney – have produced books that offer unusual insights not only into the Swiss way of life but also the country’s pragmatic impact if not influence on other parts of the world. At the Morges Literary Festival, all three writers commented on Britain’s inability to grasp how to hold a credible referendum and why extricating oneself from the single European market is sheer and utter madness, particularly if the Swiss example depicts one way on how to remain part of Europe. 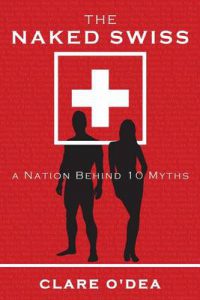 CLARE O’DEA: THE NAKED SWISS: A NATION BEHIND 10 MYTHS

As an Irish journalist and a recently naturalised Swiss, Clare O’Dea provides a critical but factually-reported and relatively sympathetic view of who the Swiss really are in the 21st century. It will probably surprise many to learn that, despite all the clichés of the Swiss disliking foreigners, they are actually a highly immigrant society – and have always been historically since Celtic and Roman times – with nearly 25 percent of residents foreign-born. Furthermore, at least one in four Swiss has a foreign grandparent and those who opt to naturalize often tend to become more Swiss than the Swiss. They take their new heritage very seriously.

O’Dea explores – and debunks or at least places into more realistic contexts – various themes, such as “the Swiss are rich”, “brilliant” or have the “perfect democracy”. She also examines how Swiss live with their perception of the role of women, neutrality, the military, or bilateralism with the European Union.

When some of the Brexiteers have pointed to Switzerland as a possible model (Switzerland is part of Schengen but not of the EU), they fail to take into account that there is only one problem with this approach, notably that the Swiss are pragmatic, and the British are not like the Swiss. The Swiss, even if they did vote against foreigners in the last referendum on limiting migration three years ago, she says, always seem to quietly work out matters. And usually, in a manner that is advantageous to them.

An Englishman who has lived and travelled in Switzerland for years, Diccon Bewes writes as an outsider, but also, like O’Dea, with a realistic but sympathetic as well as humorous view. He might be said to have arrived at the Morges festival in overkill mode. Two books, indeed. But then he is a highly prolific writer. 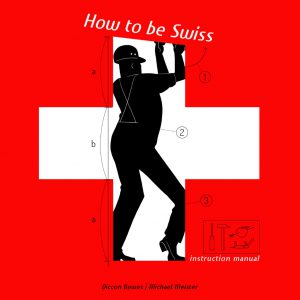 How to be Swiss is a joint book produced by Bewes and Swiss artist Michael Meister. A combination of tongue-in-cheek observations with a mix of graphics and caricature drawings by Meister, addresses the day-to-day challenges of living or travelling in Switzerland, such as: “The first step to Helvetic heaven is often the toughest: how to greet the Swiss when you meet them.

Once you’ve passed that test, the next takes you back in time through the history every Swiss knows (or should do)…” He then proceeds to take you through various steps such as “Living like the Swiss” or “The (12) Swiss commandments” with commands such as thou shalt “honour the national sausage known as Cervelat” (4th) or “speak in four tongues” (8th).

AROUND SWITZERLAND IN 80 MAPS, Bewes’ other book, is an extraordinary piece of work. Delving back into history, he takes us on a journey through time and space starting with the first known map of Switzerland. Hand-painted or computer-generated, medieval or modern, urban or rural, all the maps have one thing in common: Switzerland. Initially, too, these maps were south to north before Mercator’s formalizing of maps from north to south. They also have different themes such as Town and Country, War and Peace, People and Power and Fantasy Switzerland.

The book, which is published in hardcover English, French and German editions, is expensive ($51.13 on Amazon and 69.00 CHF in most Swiss bookshops), but certainly worth it. 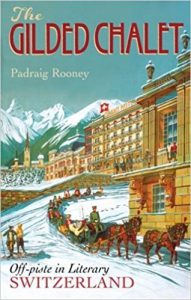 All had their fascination – or disdain – for this country, whether as a haven to live, work, escape, recuperate, travel, but also to inhale the mountain air and to savour its wines and stunning landscapes. As Rooney notes, the ‘gilded chalet’ took them all in.

Rooney takes you through contemporary Switzerland pointing out the literati cafes, luxury hotels or scenic villages (Davos, Gstaad, Les Avants…) which James Joyce (Ulysses), Mary Shelley (Frankenstein) and Thomas Mann (The Magic Mountain) used to frequent, including the psychiatric clinic in Prangins where Scott Fitzgerald placed his deranged wife Zelda. An enjoyable and highly informative read, and certainly another way to explore Switzerland.

These three books, two factual, one fiction, by Hisham Matar, Melissa Fleming and Jason Donald all deal with the refugee, migration and exile experience. At this year’s Morges festival, each author read a short extract from their books, each powerfully evocative. Based on conversations with the audience afterwards, most who had not read them were prepared to rush off and buy copies immediately.

Each of these three renderings are important contributions for grasping what it means to be forced to leave your home because of war, political repression and other forms of abuse, such as rape. One of the messages is that no matter who we are, and where we live, we could all end up in similar situations.

All three books should also be must-reads for high school students. They would certainly help them better understand what is happening in our world such as Libya and Syria, but also why so many refugees and migrants have fled to Europe. 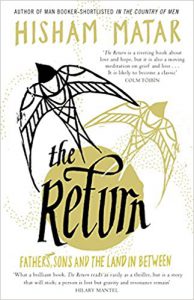 HISHAM MATAR: THE RETURN – FATHERS, SONS AND THE LAND IN BETWEEN

Written from a very personal point of view, this 2017 Pulitzer Prize-winning biography is based on the author’s return to his native Libya following the collapse of the Gaddafi regime. The purpose is to investigate the fate of his father, Jabala Matar, a businessman and former diplomat, but also political opponent, who had been kidnapped and then jailed in Tripoli’s notorious Abu Salim prison by the Libyan dictator’s henchmen.

Matar still hoped to find his father alive but later learned that he was one of 1,270 prisoners massacred on 29 June 1996 in one of the regime’s most horrendous mass killings.

By discovering the truth and exploring the issues that surround the existence of an expatriate, the author – now living in London – thought that his journey would release him from the uncertainties of his own life. The book reads like a novel, but also helps throw light on the nature of the Gaddafi period. 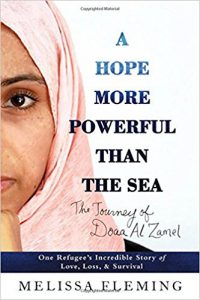 MELISSA FLEMING: A HOPE MORE POWERFUL THAN THE SEA – THE JOURNEY OF DOAA AL ZAMED

As spokesperson of the United Nations High Commissioner for Refugees (UNHCR) in Geneva, Melissa Fleming has sought to tell this harrowing story to help us better grasp what it means to be a refugee in the 21st century. (Not that it seems any different from being a refugee in the 1970s, 80s or 90s.)

Focusing on the experience of Doaa Al Zamed, a very ‘ordinary’ Syrian woman, Fleming describes the life that she used to lead with her family – dinners outside on the roof or drinking tea with friends – before being forced to flee to Egypt because of the disintegrating political situation and conflict in Syria. When Egyptian exile becomes untenable, Zamed and her husband risk – as with thousands of others – the sea route across the Mediterranean to Europe. They are aware of the possible consequences, but they still do it.

Tragically, their boat carrying 500 refugees is attacked and left to capsize. Almost all the passengers, including her husband, drown. Zamed – one of 11 survivors – is rescued four days later, struggling to keep afloat in the water and clasping two baby girls, only one of whom lives.

As someone who works with refugees on a daily basis, Fleming knows that the harsh realities of human statistics published in news reports – numbers of people fleeing, refugee camp populations, visas granted or tons of emergency relief dispatched – rarely convey the true plight of the refugee. Often a single, highly personal story tells it best. The fact that such nightmares are happening in Europe, or at least on the doorsteps of Europe, makes a marked difference. So does the fact that many of us, particularly those who have vacationed on the Greek or Italian islands where the bulk of these Mediterranean boat people land, can imagine at least part of the context.

A Hope More Powerful than the Sea is – or will be – published in over a dozen languages. The film rights also have been purchased. Not unlike The Killing Fields, both a book and a movie which helped put the horrors of the Cambodian holocaust on western radars, Fleming’s may do the same for refugees. 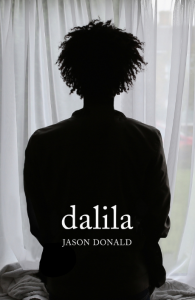 In another form of refugee experience, Jason Donald writes in the form of novel based on well-researched, on-the-ground realities. Now based in Switzerland, Donald is a Scottish-born writer who was brought up in South Africa. So he has always had an affinity with Africa.

With Dalila, Donald has sought to portray the plight of a Kenyan woman forced to flee illegally to the United Kingdom not because of political persecution – as Donald points out, this is usually the sort of justification that asylum seekers use – but because of rape and violence. Like many seeking refuge in the UK, Dalila arrives at Heathrow airport with the help of professional traffickers. Given temporary visa she embarks on a harsh new life. Nothing is easy. Bureaucracy, abuse, manipulators – all reminders of a cold inhumanity.

Despite all this, there are still touches of tenderness and personal warmth. For Jason Donald, the point of Dalila, which is written like a page-turning thriller, is to provide an insight into what is happening in the world of asylum seekers: interminable waiting, uncertainty and torments of memory that face those in search of a new start.

At the Morges Festival, Donald said that he knew little about apartheid when brought up as a white boy in South Africa. Researching this book made him go beyond the ‘unknowing’, by investigating the desperation that happens behind the scenes. This is a remarkably written and evocative book.

Global Geneva editor Edward Girardet, who moderated at the Morges Literary Festival, is both a journalist and author. He has covered humanitarian and conflict issues world-wide for over 30 years.