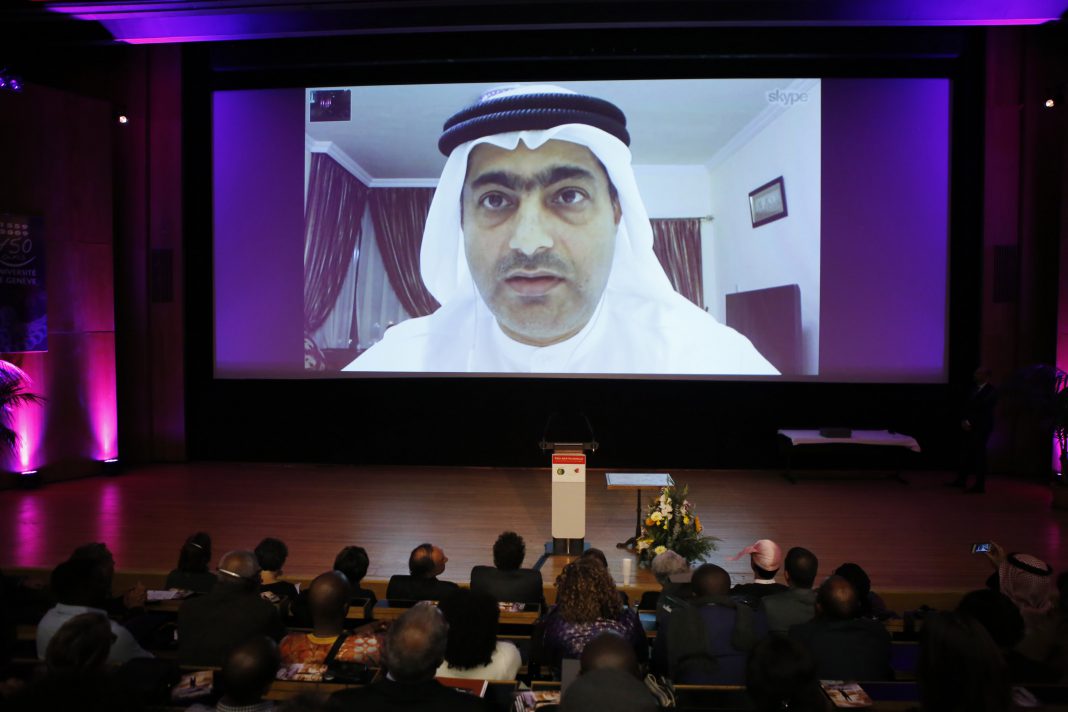 An international jury of 10 leading human rights organizations awarded the 2017 Martin Ennals Award for Human Rights Defenders to Egyptian Mohamed Zaree for his deep commitment to human rights while facing great personal risk. Zaree was prevented by the Cairo government from attending the Oct 10 2017 ceremony in Geneva. Zaree is a devoted human rights activist and legal scholar whose work focuses on human rights advocacy around freedom of expression and association.

For further information, go to MEA: This article also appears in the Oct-Nov 2017 edition of Global Geneva magazine.

WITHOUT INDIVIDUAL HUMAN RIGHTS DEFENDERS (HRDs), the Universal Declaration of Human Rights and other human rights law risk being a dead letter. Almost all human rights organisations have a mandate to come to the succour of threatened colleagues via urgent appeals and other campaigns. Some 150 now run an award and the number keeps growing – half were created since the beginning of the 21st century.

(Main photo: Ahmed Mansoor, a human rights activist from the UAE, giving his acceptance speech via Skype for the 2015 Martin Ennals Award. Mansoor is on a travel ban since 2011. [PHOTO: VILLE DE GENEVE]

Curiously, however, the best known of these awards, the Nobel Peace Prize, is given out annually in Oslo and not in Geneva, the international hub for human rights. Alfred Nobel died on 10 December. Decades later, the United Nations declared 10 December as International Human Rights Day and designated 21 September as the International Day of Peace. The strange result is that the Nobel Peace Prize – intended for contributions to ‘peace’, not necessarily ‘human rights’ – is awarded every year in Oslo on 10 December, which is ‘Nobel Day’ in Sweden and Norway, and International Human Rights Day for the rest of the world.

The small volunteer secretariat operated out of Geneva, but many of the first award ceremonies were held abroad in places where the laureates are active. In 2001, it was decided to make Geneva the permanent location for the annual ceremony. By 2008, the lakeside city started offering serious support by making the award part of its “International Geneva” plan, an effort to galvanize the private and public sectors, including the rest of Switzerland, with regard to the region’s crucial importance as a hub for critical global issues. Since then, cooperation has grown into an admirable win-win partnership with the award run on a fully independent basis, while Geneva provides the infrastructure for the ceremony.

This suits all parties. The actual decisions are made by an autonomous jury of experts enabling the city to avoid having to deal with controversial aspects.

Presenting the awards: a matter of protection – and courage

The wisdom of this separation was reiterated in 2016 when the MEA went to an imprisoned scholar belonging to the Uyghur minority. China reacted furiously, but its target ended up being the UN High Commissioner for Human Rights, who courageously persisted in presenting the award at the ceremony as his predecessors have done over the years.

How effective are human rights awards? To answer this, one needs to know in which way they are intended to help human rights defenders. In the first place, all awards seek to offer recognition and encouragement at the psychological level. This goal should not be trivialized as activists often have to work in difficult environments. Furthermore, they may prove unpopular even within their own social circles.

Secondly, many awards come with some financial support. Even relatively small amounts go far in cash-strapped organizations, many based in developing countries.

Finally, the most important but also elusive goal is protection. The latter is not really possible without a fair degree of publicity. An example: On 13 May 2008, Mutabar Tajibaeva, a detained human rights activist in Uzbekistan, was announced as that year’s MEA Laureate. A few weeks later, on 2 June, she was released from prison on medical grounds, and a few months later, was allowed to travel abroad. She came to Geneva to receive the MEA in person, declaring publicly that the award saved her life. However, one cannot state categorically that her release was a direct result of the award; many other actors contributed to the pressure that resulted in her release from prison.

That such impact cannot be taken for granted is shown by the case of Ahmed Mansoor from the United Arab Emirates, the 2015 Laureate. The government did not lift his travel ban and he had to address the audience via a video link.

His case received further global coverage in August 2016. Flaws in Apple’s iOS operating system were discovered by Mansoor who alerted security researchers to unsolicited text messages he had received. Apple has since released a software update that addresses the problem. Then, on 20 March, 2017, around midnight, Ahmed Mansoor was arrested at his home in a raid by a large team of the Emirates’ security forces.

His importance as a human rights defender was demonstrated by the international response to this sudden arrest. In addition to many newspapers and social media, the UN Special Procedures and the EU Parliament quickly called for his release. But today, six months later, he continues to linger in jail.

Some believe that human rights awards can endanger the lives of laureates. Clearly, this is a danger, but the best judge of the balance between increased risk and greater protection remains the human rights defender in question. And generally, they seem to regard public exposure foremost as a form of protection, reflecting the increased importance of the media even in tense situations. The biggest problem with seeking increased protection through publicity is perhaps that the media are not automatically interested in all human rights awards.

That the media are increasingly referring to the MEA as the “Nobel prize for human rights” is perhaps the best sign that after almost 25 years, the award has found its status and place in Geneva. With the delivery of the 2017 prize on 10 October in Geneva, it will again be in the hope to go ‘from the front line to the front page’.

Hans Thoolen is a Dutch national who has worked for various NGOs and inter-governmental organizations, including 12 years in Geneva. He is now retired but not tired. Read his blog: https://humanrightsdefenders.blog/