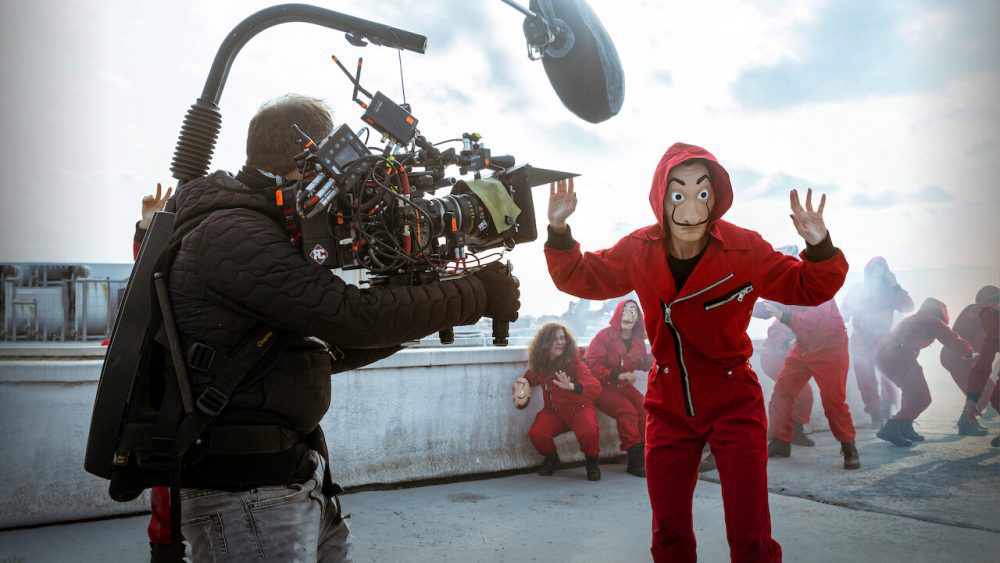 Money Heist is not about the money, of course. Its Spanish title, La casa de papel (the House of Paper), with its hint at the 2013-2018 series on political corruption and Netflix’s first TV series, House of Cards, makes it much clearer that the series is really about the social system in modern societies.

House of Cards was based on a 1990 British thriller of four episodes, and Money Heist makes frequent allusions, at least in words, to film classics. But its more substantial references are to all the nasty things governments are prepared to do, from Viking plundering, Spanish gold stealing from the Americas and German destruction of the Warsaw ghetto, to Putin’s assault on a theatre full of hostages and Central Bank wild printing of money to stimulate economies no matter what the effect on inflation.

An Italian anti-fascist song “Bella ciao“, which played multiple times throughout the series, became a summer hit across Europe in 2018, wikipedia notes. The gang of robbers in jumpsuits and Salvador Dali masks describes its actions as Resistance, in contrast to Squid Game’s unforgiving focus on individualism.

Less admirably, robbery gangs began wearing red jumpsuits and Dali masks for their own heists, we hear in Netflix’s documentaries on the series. More to the point, so did political demonstrators, as indicated in third season. Money Heist imagines a street populism quite the opposite of Trumpist and rightwing demagoguery so prevalent in Europe and Latin America these days.

It also innovates in its treatment of sexual and marital relations. If it weren’t for the violence, you might think it was all about romance in the time of social tension. Did you ever see a TV series with this much to say about LGBTQ+ views of the world? And though the series makers describe it as also about being a parent, it is more about how to be an absent parent.

Where it falls down as a social critique is its inability to see anything but crime as a response to the frustrations of modern capitalism. The jumpsuit demonstrators observing the heist are nothing more than rent-a-crowd placard wavers. They are not at all like Black Lives Matter and MeToo groups, or even the deluded Jan 6 army-fatigue insurrectionists in the U.S. Congressional building.

Its many scenic hymns to teamwork, loyalty and artisanship are all to the benefit of the criminals, while the army and police are little more than stick figures and malevolent psychopaths.

The series creator, Álex Pena, confessed he did not know how to end the series on an upbeat, until the last day of shooting. The documentary also reports that the series makers had no experience in how to make a “war movie”, and the actors revealed how tedious and drawn out such filming is. “It was like Groundhog Day,” that film of a lifetime of repetition, said one of them. But its many flashbacks never seem forced (or confusing as in Yellowjackets), and each adds something to our understanding of the characters.

More seriously, international activists can point to Myanmar, Sudan, Lithuania, Thailand and Hong Kong for examples where peaceful protestors are willing to risk their lives for ideals that have nothing to do with crime.

But even if you can’t stand watching the whole five seasons, I’d recommend the Netflix documentaries for the background they offer on how actors approach their parts and the problems of filming a blockbuster.

The documentaries also show the actors are even more interesting than their characters. Itziar Ituño (Inspector Murillo) has shown commitment to her Basque origins. Úrsula Corberó (Tokyo, our unreliable narrator) is a feminist, climate activist and Catalan non-separatist who in 2017 tweeted she was “heartbroken” by police violence after the independence referendum.

Pedro Alonso, known as Berlin, one of those parents, is terminally ill but his actions are a hymn to life, even marrying a woman who knows he is dying.  But he does not expect her to remain in mourning afterwards. There’s a lot of dancing and partying as well as violence.

Álvaro Morte (the Professor) studied in Finland before returning to Spain. Like Berlin, he was given little hope of life when diagnosed in his 30s with a cancerous leg tumour in his leg. But he says he had no fear of death. “I consider that [death] is part of life, it is something that we must accept because sooner or later it will happen.”

Pedro Alonso (Berlin), is also a writer and former dance student. We see him painting in one of the Netflix documentaries in order to build up a picture of his character and environment. He speaks Spanish, Galician, Catalan and English. Paco Tous (Moscow) is an ambassador for Andalucia and the Macarena Brotherhood. Alba Flores (Nairobi), the daughter of a composer and a theatrical producer, comes from a family of gitano performers, and trained at the same studio as Javier Bardem. Pina wrote a role specifically for her in Money Heist. She has worked with her friend Najwa Nimri (Alicia Serra), a Jordanian-Spanish singer recording as Najwajean as well as an actress. Fernando Soto  (Ángel) has directed a play by Nimri. Rodrigo de la Serna (Palermo), from Argentina is also part of a musical group, but made his name in the 2004 biopic about Che Guevara, The Motorcycle Diaries.

Fernando Cayo (Colonel Luis Tamayo) may be the nastiest character on set but he learns his lines by walking a treadmill with his next door neighbour reading the cue lines. Luka Peroš from Croatia speaks five languages and can therefore dub his own lines into English, French and other languages as well as Spanish.  The Netflix documentaries show him doing this. He is also a puppeteer.

Belén Cuesta (Manila, the transexual friend of Denver) is mainly a theatre actress. Jaime Lorente (Denver) has published a book of poems he started writing in high school. Enrique Arce (the odious Arturo Román, Director of the Mint) financed his studies at the American Academy of Dramatic Arts with winnings from a television show. Darko Perić (the bearded heavyweight Helsinki) graduated as a vet and teaches Qigong in masterclasses around the world. Hovik Keuchkerian (Bogota, the other heavy) is a former Spanish Heavyweight Boxing Champion. He made a new career as a stand-up comedian and writer, publishing four books so far.

They are all featured in wikipedia’s article on Money Heist. It suggests they found better ways of giving their lives meaning without turning to crime.