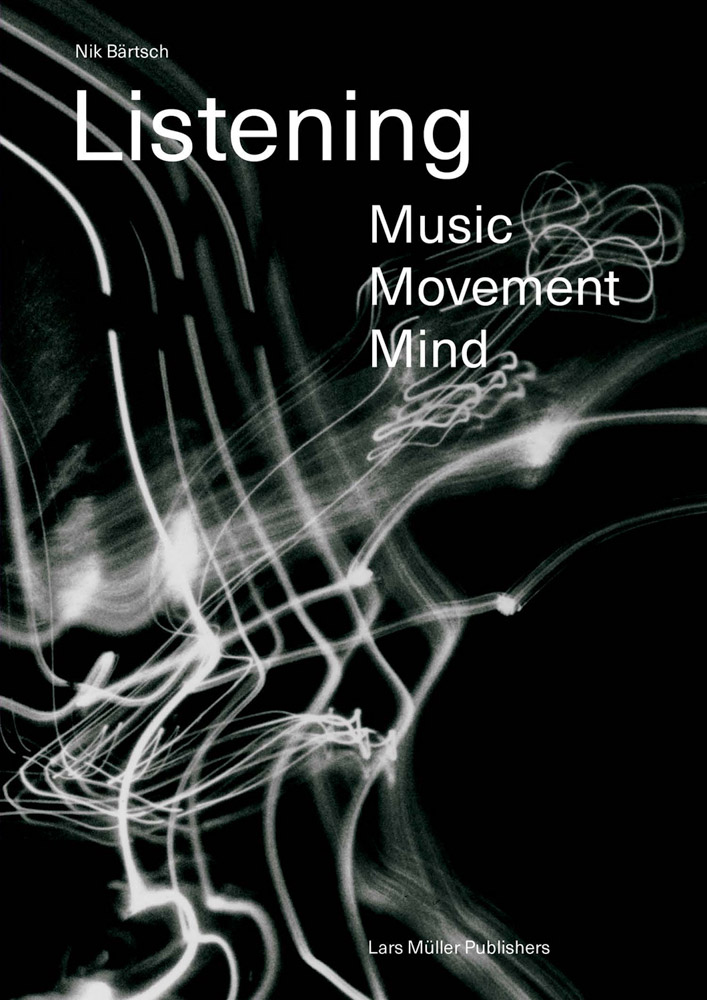 Zurich-based Nik Baertsch describes his music as like exploring a city and “a kind of acoustical coral reef”.  But the preface to his “Useless Guide for Everything” declares: “This book wants to listen to you – to your thoughts and comments and your attentive silence.” (See Peter Hulm’s piece on Bartsch)

Listening: music, movement, mind (Lars Müller Publishers) bursts like a wild field of flowers with aphorisms and observations from soccer, biology, Nik’s teenage daughter, a fashion designer, and cartoon books including manga and Tintin. One of them is the Zen proverb: “The mind is a wild monkey.” It’s the sort of book that makes you glad it does not have an index. There are so many good ideas to discover simply by leafing through its 350 pages while trying to find something you read earlier.

Of course, Baertsch offers lucid explanations of his music, while quoting Stravinsky: “The only real comment on a piece of music is another piece of music” and jazz pianist Keith Jarrett: “Only listening will determine the meaningfulness of the music” [the Köln concert], while also citing the Zen saying: “Understanding is easier than practicing”. But he manages to show us it all makes sense: his music, his martial arts and his philosophical background. Despite his expressed uncertainties, he manages to put musical experience into enlightening words. “Music gives me a sense of security and, at the same time, a sense of the unknown,” he writes.

The preface explains the book’s title. The Baertsch-Pfisterer’s aikido sensei, Lewis Bernaldo de Quiros from Haarlem in the Netherlands, often says in seminars: “Listen to your partner!” Why “listen”? Their answer: your whole presence is involved. You are not analysing or talking to yourself in your head. “There is silence on the mat because of pure presence and full neutral engagement with the partner.” It also leads to “a true dialogue without preconception, without signalling that you do or want something.”

One of Baertsch’s key experiences was reluctantly meeting an aikido master in Germany who taught guitar to schoolchildren and also trained the local police force in close combat (Baertsch was pressured into the visit by a concert assistant). The teacher asked Baertsch rhetorically, pointing to the history of Japanese martial arts during the relatively peaceful period between 1603 and 1868 when former warriors cultivated poetry and calligraphy: “Which police officer today can invent a poem off the cuff?”

“At that instant, I understood the common ground between the fine arts and the martial arts,” Baertsch observes. “They have the same immediacy; they both cope with confronting violence, love, life and death.” He also writes: “Musicians move in much the same way as martial artists: they create the requisite musical flow in the immediate present, as if of its own accord”.

Baertsch has been a musician since childhood, studying piano and percussion from the age of eight. He played from the earliest age with his regular drummer Kaspar Rast, graduating at 16 from what is now the Zurich University of the Arts.  From 1989 to 2001 he studied philosophy, linguistics and musicology at the University of Zurich. From his mother, a psychologist, Nik learned Zen meditation at 18. But he started aikido relatively late at 29. He was a strict pacifist though fascinated by the Japanese approach of combining techniques of movement with aesthetics and philosophy in the martial arts. So he looked for a non-competitive martial art based on non-violence and cooperation. He was prompted to action by an incident in Zurich.

“One day I was mugged in the middle of the city in broad daylight, but in an underpass,” he reports. “What shocked me most was not the man’s brutality but his tempo, timing and presence – and my complete lack of all three in that situation. I felt completely helpless, powerless and outfoxed. This triggered my decision to start studying aikido.” He found the nearest dojo in the telephone book and started training the same evening.

He recalls feeling enjoyment from being a beginner again, just as he did when first starting music. “Today every good youth team in sports has a physical AND a mental coach; it is positively bizarre that neither of these exist in the world of professional music,” he comments. He now has a 3rd dan in aikido, spending half a year in Japan with Andrea in 2003-2004.

As a musician Baertsch works with three distinct formations. Mobile plays purely acoustic music, performed in rituals lasting up to 36 hours. Ronin is a “Zen-funk quartet”. As a solo performer Baertsch uses prepared piano with percussion. Since 2004 Baertsch has held a Monday evening musical get together in Zurich. Since 2009 it has taken place in the EXIL club he co-founded. His project partner, architect-designer Christoph Kellenberger, wanted a place in his home town to go into exile occasionally.  Since 2018 the Montags concerts have been streamed live on the Internet via Yourstage.live (LINK). In all, there have been over 850 Montags concerts.

His comments on Swiss society seem equally relevant to his music:

“Switzerland often seems like a permanent world fair to me: the whole world passes through our country and inspiration flows without national blinkers.” But he is not blind to the absurdities here. He notes that the Swiss artist Harald Naegeli was arrested in 1984 and sent to prison as the “Sprayer of Zurich” then received the city’s art award in 2020 for the stick figures he sprayed on the walls of Zurich’s buildings. In 2005 Mobile planned a musical ritual taking place from sunset to dawn on an empty island on the lake of Zurich. The city police chief forbad it, “on the rather flimsy grounds of noise pollution in an uninhabited location where the traffic noise on the road nearby was actually the main problem on a Friday night in a hedonistic city”.

“We Swiss live in one of the safest countries in the world, yet we’re constantly preoccupied about our well-being in all possible respects. Our tendency to bemoan everything is acute, and we often display too little risk-readiness and awareness because our very prosperity has made us lose our sense of what is essential.” Quoting the writer Friedrich Dürrenmatt, he also describes life here as “the easy life in a self-imposed prison”.

His motto: “Ecstasy through asceticism”. For Nik, music helps tame the wild monkey.

An earlier article focused particularly on his musical talents: Moving together: jazz from a funky Swiss philosopher (LINK). He has performed in over 50 countries. “A composition consists of more than the musical material,” he says. “It also represents the social, ethical and aesthetic ideas of the composers – the way they build their musical houses, plant their musical gardens, invent their musical habitats, tailor their musical clothes.”  He includes a sketch imagining Igor Stravinsky composing in an ice-cold junk room with an off-tune piano in Château-d’Oex in winter 1914, surrounded by empty old Suchard chocolate boxes, with a chicken roost next door. At 85 Stravinsky declared: “I would be frightened to enter some of the compositions I have heard of late, in their forms as buildings.”  Surely not with Baertsch’s music.

Baertsch credits graphic designer Michelle Nüssli, translator/editor Catherine Scheibert and others for help in producing the book. It seems in line with his musical and humanistic principle of giving credit to others. Most of the photos are by Martin Möll, a friend who died of an incurable disease in 2019 at 46, and wrote in a letter of goodbye quoted in the book: “Even as a child, the thought occurred to me that I would not grow very old. It is a free, rational thought that never depressed me and was to accompany me my whole life long. This thought is the origin of enjoying every moment of my life and always trying to find my own way among all the many possible ways.”

The publishers describe Listening as a conceptual and practical book, offering exercises and games, that they hope “inspires the individual creativity and consciousness of the readers”.

Lars Müller Publishers is supported by the Swiss Federal Office of Culture with a structural contribution for 2021-2024.

Nik Baertsch’s website (LINK). The book (CHF40): (LINK) or through www.artbook.com in North America. Listen to his Montags music on the website: (LINK)  or on YouTube (LINK).