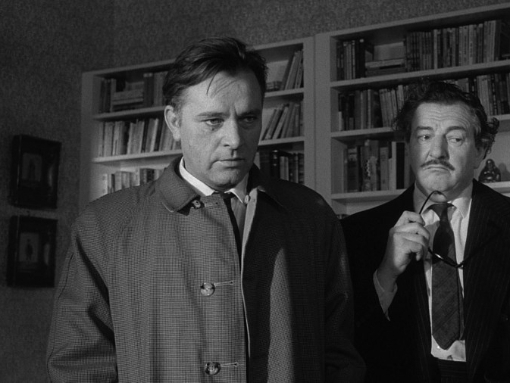 The ‘Spy Who Came in from the Cold’. John LeCarre’s 1963 Cold War novel about espionage in East Germany which director Martin Ritt adapted to cinema in 1965 with Richard Burton as the lead character, Leamas.

As a wire service reporter during the Cold War days, I, too, had brushes with operatives from the ‘other side’. They were mostly comical, or at least I saw them as such – and acted accordingly. I don’t know why anyone would think I could be an asset. But East Bloc talent spotters may just have imagined that, as a Swede, I was a softish target. Maybe a social democrat – who Lenin called “useful fools” – if not a fellow traveller.

One encounter led to a brief entry into my Stasi (East German secret police) files, which I retrieved from the office set up after reunification to bring transparency into the murky legacy of the “workers’ and farmers’” surveillance state that was the German Democratic Republic. (The GDR, created from the eastern part of Germany occupied by the Soviet Union after WWII, was formally reunited with The Federal Republic of Germany in 1990, after collapsing in 1989.)

On 5 December 1979, the accredited Western media was bussed by the East Berlin foreign ministry press office to Lutherstadt Wittenberg to witness the withdrawal of a Soviet tank division as part of a Soviet-US deal. These were the years of endless SALT negotiations. The power blocs were in a thaw, which quickly froze over a little later when the Soviets invaded Afghanistan.

December 5th was a cold day. After getting up at 5 a.m., I crossed from West Berlin to East Berlin at Checkpoint Charlie, manned on the Western side by friendly American GIs, and on the Eastern side by chillingly polite East German border police who studied your passport and visa as if certain that something was wrong.

In the border pavilion on the Eastern side, I once again read the quote by Bertolt Brecht painted on a wall to remind travellers of what would happen if the Cold War got hot (“after the third war, the city was nowhere to be found””). Thus cheered up, I walked quickly a few blocks to the GDR Foreign Ministry press office in Friedrichstrasse, signed in and boarded a press bus bound for Wittenberg.

Breakfast was provided – a string bag with small, hard oranges, a large bottle of beer, a tough-looking smoked sausage and enough dark bread to get through the week. Deciding whether to eat or not helped pass the time as the press bus drove through towns and villages, meandering off the Autobahn for a very autocratic reason.

The Leipzig Fair was opening that day, so the motorway was closed. This allowed the leadership to travel unbothered between East Berlin and Leipzig. Like most dictators, the leaders in the GDR seemed afraid of the people, and certainly avoided any unscripted encounters.

Once again, the GDR and its small towns, even in white winter finery, struck me as grey and very sad. Most towns and villages had a Platz der Deutsch-Sovietischen Freundschaft – the German-Soviet Friendship Square. It seemed as if an “or else” was missing on the street signs that usually just read “DSF-Platz”.

In Wittenberg, there was the usual unriveting ceremony – long speeches, pompous music by a military band and inept singing by a Young Pioneers choir.

After that, a troop train with tanks and baby-faced soldiers with carnations in their gun barrels pulled out of the station. As part of the ceremony, the Young Pioneers had given the carnations to the soldiers, who all spontaneously stuck them into their guns, as you do. As the train chugged away, it passed a sign saying “Richtung Berlin” – a PR slip, surely. I cursed myself for not having brought a camera.

During the ceremony, I had left the area for 15 minutes to go look for a place to buy a sandwich, or a beer. Two men in long leather coats followed me, walking close so I would not miss their presence. After a few loops along empty streets, I gave up and returned. I remember reminding myself not to talk to anyone, knowing that I would cause them all kinds of trouble just by asking for directions.

On the bus back to Berlin, a too friendly fellow from the ministry press office sat down next to me.

He ignored the fact that I was clearly trying to compose a story and was deep into my notes.

I was going to dictate my night lead to the UPI desk in London (I was a UPI staffer for six years before joining Reuters in 1983) as soon as I got back to the Kempinski Hotel in West Berlin. This was not an urgent story, but a current affairs piece that would get play in the US. It even got into the Herald Tribune with my lead about “baby-faced Soviet soldiers, carnations at the ready” untouched.

The official really tried to draw me into a conversation. He asked my views about all sorts of current political situations, not at all put off by my monosyllabic grunts. He said at one point that he hoped we could remain in touch once I returned to Hamburg. It seemed to be his way of telling me that he knew who I was.

(As news editor for UPI in West Germany, I was based in Hamburg at dpa headquarters, next to their domestic desk. I also served as foreign coverage liaison between UPI and dpa. A cool domestic news editor said once that dpa’s motto should really be “we may be late but we’re often wrong”.)

I desperately wanted the GDR official to leave me alone. After close to an hour, I finally found a way to get rid of him.

In the GDR, every road sign for Berlin read “Berlin Capital of the GDR”. To the GDR, claiming the divided city of Berlin as the capital was of course politically vital. But I cheekily asked him if the people in his country had memory problems or learning difficulties.

“Why,” he replied. I said, loud enough so a few heads turned, that in Sweden we learn at a young age that Stockholm is the capital and there is no need to put a reminder on every road sign for Stockholm. As far as I knew, I said, that seemed to be the situation in most countries except the GDR.

Red in the face, he rose at once and left me alone. In the files, the Stasi official – because that is what he was – wrote simply that I had been on the media trip but had kept to myself and had not done anything untoward.

Hardly the stuff of espionage. Just an anecdote from an everyday occurrence by a Western reporter behind the Iron Curtain during the Cold War.

And a reminder that in a pinch, it can be helpful to be rude if you want to be left alone.

Bjorn Edlund was chief correspondent and news editor with United Press International and later Reuters in Europe and Latin America. From 1989 until he retired, he worked in business communications, as a consultant and as head of corporate communications at Sandoz AG, ABB Ltd. and Royal Dutch Shell Plc. A Swede, he lives near Basel with his Swiss wife. Their daughter lives in Sweden.