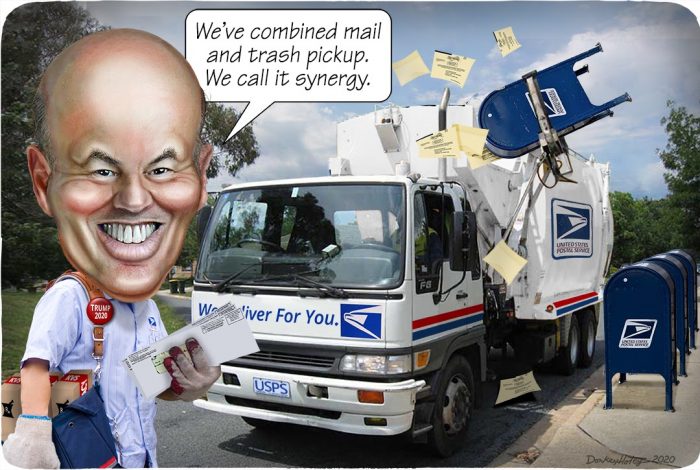 Trump’s strategy this time around appears to be based on the notion that poor voter turnout usually favours the incumbent. If Trump can keep people from voting, he just might manage to hold on, especially since the election is likely to be determined by just a few key swing states. Even if Trump loses the election, he appears to be hoping that he can create enough doubt about the final results to challenge them in court. He is not prepared to leave the White House quietly.

Trump’s unexpected ally in what looks like an increasingly desperate campaign is none other than the COVID-19  pandemic.  Trump clearly hopes that the coronavirus will terrorize enough voters to keep them from casting ballots in person. This will enable everything to continue as it has for the last three years, effectively maintaining the current status quo. It may not be an accident that Trump is doing absolutely nothing to try to control the pandemic, and instead has told everyone to return to business as normal, advice which has led to an uncontrolled surge in the spread of the disease.

An added benefit for Trump is that fear of COVID-19 will very likely discourage the usual volunteers who would normally man polling places.  Even if it doesn’t discourage them, the fact that it might serves as an excellent pretext for dramatically cutting down on the number of sites where people can actually cast a ballot.  Milwaukee, Wisconsin normally offers 180 polling sites during a normal election.  For last spring’s primaries, only five were open.

The obvious solution, given the danger of spreading coronavirus, is to authorize everyone to vote by mail. Overseas American citizens and US military personnel have been filing absentee ballots without a problem for decades; a number of states now handle nearly all their voting by mail.

Trump does not want Americans, particularly minorities, to vote

Trump obviously does not want American voters to have that option. He has been doing everything he can to predict disaster, not to mention widespread fraud, if the country finally does resort to voting by mail. Just to make sure it doesn’t happen, Trump has mounted an unprecedented campaign to destroy the US Postal Service.  He has repeatedly insisted that if voters resort to mailing in their ballots, the November election will be the most fraudulent in history. The decision by the House of Representatives this past weekend to vote for 25 billion dollars of additional funding for the U.S. Post Office may not pass in the Republican-controlled Senate, despite numerous citizens protesting to their senators, regardless whether Democrat or Republican, about the disruption of postal services. In a last resort, many suspect that Trump will simply veto the move.

Amazingly, despite the scorched earth campaign against the post office,  Trump and vice-president Mike Pence, both prefer to mail in their ballots themselves. There has never been any sign of significant fraud occurring because of absentee ballots, but that hasn’t stopped Trump. He assumes that if he repeats the lie enough, somebody is bound to believe it.

What Republican strategists clearly hope for is a perfect storm in which three elements: the virus, reduced polling places and artificially-generated public distrust of voting by mail, will come together to provide just enough leverage to enable Donald Trump to squeak across the finish line.

In an effort to make dead sure that voting by mail does not take off, Trump appointed Louis DeJoy, a major Republican donor and trusted Republican apparatchik, to be his Postmaster General.  DeJoy’s job was apparently to make sure that even if voters wanted to send in their ballots by mail, the post office would not be able to handle the sudden surge in mail.

A slow sabotage of postal services

DeJoy began quietly sabotaging the US Post Office almost as soon as he took over. He has been rapidly disabling automatic sorting machines, leaving them exposed to the weather so they can’t be reinstalled, removing US mailboxes from neighborhoods that the Republicans would just as well not hear from, and denying postal workers overtime with a clear intention of building a backlog of undelivered mail.  Testifying to Congress last week, DeJoy said that that he would not dismantle any more equipment before the election, but it is difficult to know how much damage he has already done.

Other effects of the Republican strategy are more subtle.  In Philadelphia, for example, the city has announced that it will install drop boxes for ballots in strategic locations, including the City Hall.  Anyone who can reach the designated locations, can simply drop their ballot in one of the boxes, which will be kept under constant guard.

For upper middleclass white voters who live in the center of the city, that is no problem. For the poorer, largely black and Hispanic ghettos at the city’s outer limits – just the kind of people that Trump wants to keep from voting – it may be a different story, especially if no effort is made to provide facilities in their neighborhoods and no one takes the time to explain to them where and how they can actually vote.

This is a form of voter suppression that has been tried repeatedly in the past, and which depends on changing the playing field and counting on inertia to do the job. Choosing the location of voting facilities, in short, is a relatively easy way to cancel out your opposition, or at least weaken it enough to accomplish the same thing.

The difference gained by all this may be only a few percentage points in the final vote, but in a closely matched election that can be enough to swing an election. Most elections are not decided by millions of votes. It is usually only a hundred thousand or so ballots that actually make a difference.

Elections have been hotly contested in the past, but what has held the United States  together for more than two centuries is a general agreement to play by the rules, and to maintain a certain sense of decorum and fairness. The idea is that both parties want to do what is best for the country. What makes the current administration different is its readiness to throw those rules and the history they represent along with any pretense at decorum and tradition, out the window.

The Post Office, which the founding fathers thought important enough to include in the Constitution, is just the latest casualty in what looks very much like a coup in slow motion.  Louis DeJoy, may go down in history as the assassin of the US Postal Service, but chances are that he will be forgotten fairly quickly.

What is happening here is much bigger than that. It is a battle for the soul of America. What Trump and his enablers have really accomplished is to create a situation in which we will be forced to risk death from a killer virus if we want to keep America great.  It is worth remembering that in the past, Americans faced dangers that were just as daunting as those they face now. The country is being tested once more to see if it is still up to the challenge.