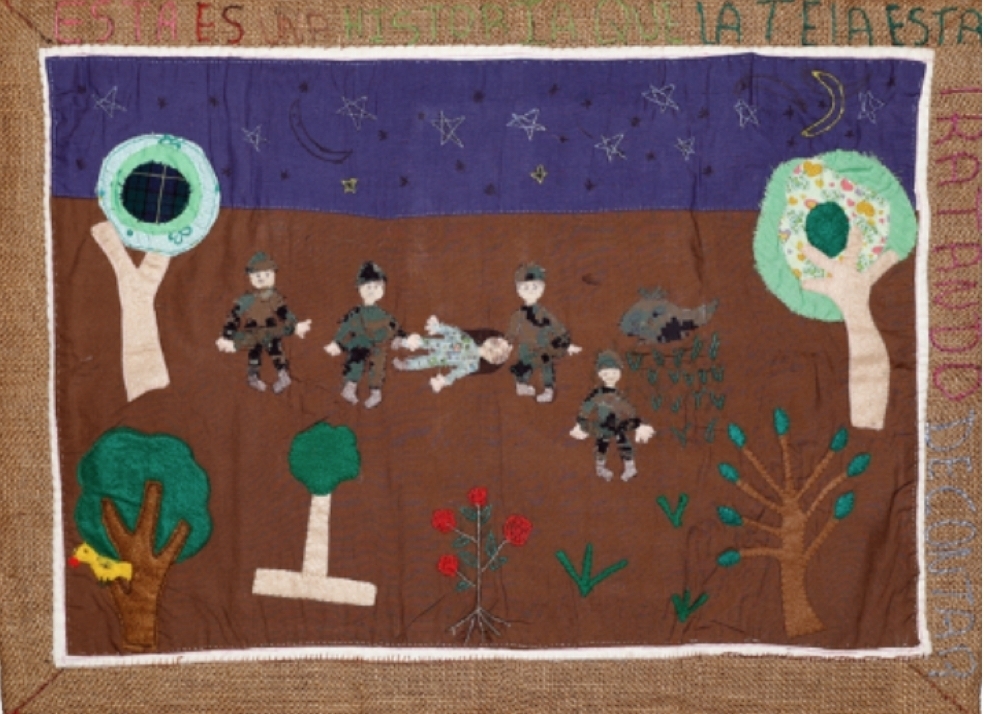 At first, she was frozen in silence, unable even to make eye contact. Eventually, she wove her unspoken, unspeakable memories into her cloth: under a starry sky, men in military fatigues surround the body of a young woman. Two brighter elements shine out, however: red roses represent her daughter’s soul that keeps blooming; a yellow bird is her daughter’s voice. ‘I can hear it again,’ she explained. Slowly, she could start to heal.

This cloth forms part of The Fabric of Healing, a virtual exhibition of deceptively brightly-coloured tapestries. They were created through sewing circles facilitated through the Common Threads Project to enable survivors of SGBV (Sexual Gender-Based Violence) to begin a healing journey. Launched on the International Day in support of Victims of Torture, the exhibition raises awareness of the staggering and unacceptable number of women who have suffered physical or sexual violence, rape, early forced marriage, FGM/C (female genital mutilation/cutting) and/or sex trafficking. The World Bank estimates this to be almost one billion — 35 per cent of women worldwide. In conflict zones, continued instability and violence mean that the situation is extremely hard to measure.  Shame and stigma also silence survivors. The UN believes that vast majority of cases remain unreported.

Sarah Grosso: Melissa Flemming, UN Under-Secretary-General for Global Communications, described sexual and gender-based violence (SGBV) as “one of the worst crimes of war”. Can you tell us about the impact of SGBV in conflict situations?

Catherine Butterly: Rape has long been used as a weapon of war in all parts of the world. A strategy used to ‘punish, terrorize and destroy populations’, it is considered a war crime and a crime against humanity in international law.

Victims are targeted both for their gender and ethnicity. Although it disproportionately affects women and girls, men and boys can also be victims. Those affected suffer physically and psychologically. The physical act of violence is just the beginning. Trauma isolates through shame and silence, severing links to the wider community and causing great psychological distress. This enduring trauma is often exacerbated by economic and social deprivation and violent political climates.

Story Cloths: a form of truth-telling in times of war and repression

SG: You have worked with The Common Threads Project for eight years now as part of a team training facilitators in different parts of the world. What seems unique – and powerful – is the creative approach you use incorporating the creation of story cloths into the healing process. What inspired this approach? How do you adapt the method to respect the needs of survivors in different cultural settings?

CB: Apilleras, or Story Cloths, have been used in many parts of the world as a way of truth-telling and witnessing in times of political repression and war – by Holocaust survivors, the Hmong people, in Northern Ireland and South Africa, amongst others. In Chile, under the Pinochet regime, women stitched stories of their disappeared loved ones into cloth as an act of political resistance.

Inspired by these approaches, Rachel Cohen, an American psychologist, founded The Common Threads Project about nine years ago after meeting Canadian psychologists who had been working with Chilean women survivors using Apilerras as a therapeutic method. The Common Threads team, consisting of five mental health practitioners, brings this approach to war-afflicted countries, in particular to reach the many women affected by SGBV. Common Threads has trained facilitators in Nepal, Ecuador, the DRC and Bosnia in this approach in order to accompany groups of survivors through their healing process.

Global Geneva makes its content available for free worldwide in the public interest. We also seek to highlight the work of writers, photographers, film-makers and cartoonists as part of our support. If you like our approach to independent journalism and our Youth Writes educational initiative, then please join us as a support member. Or simply contribute. Quality journalism cannot exist without your help.

Working in partnership is vital: the facilitators often live in the same conditions of endemic violence and economic deprivation as the survivors and can serve as experts and guides to help adapt methods taken from Western approaches to ensure they are integrated appropriately in local contexts and so that local knowledge is at the forefront of the work. Part of the work also involves paying close attention to and providing support for the facilitators themselves, many of whom have been working in the most challenging of conditions for years.

SG: The story cloth entitled The Rosebush is deeply moving. Why is it so important to be able to express emotions and give people a voice in this way? What is it that makes the creative act of sewing so conducive to healing this kind of trauma?

CB: Building the story in the cloth is a carefully managed and slow process to avoid overwhelming the women yet again.  Women who have been sexually assaulted often experience a profound lack of safety that remains for a long time. It is very important to build an environment in the groups through Somatic work and textile art that is soothing and calming so that a sense of safety can be restored.

The slow rhythmic action of sewing is deeply calming for people who have had terrifying experiences and are often highly anxious or suffering from intrusive memories. When trauma is severe, the body can either become highly activated or freeze, blocking the ability to express emotion or to speak. In the circles, little by little, women begin to feel less shame, to build trust with each other and to engage in the therapeutic process.

SG: What happens as these women start to heal?

CB: Troubling forms of anxiety and fear lessen and the women report having a greater sense of control over their emotions and bodily sensations. As they begin to express that which cannot be spoken, symbols of hope and joy emerge in the cloth along with the disturbing images. The art therapy part of the process, allows the women ‘to show’ rather than ‘to say’ when it simply is not possible to communicate verbally, at least in the beginning. It also allows women to express themselves in a culturally appropriate manner.

Sewing: an ancient practice for woman to share their joys and sorrows

SG: One of the speakers at the launch event of the exhibition, Pramila Patten, UN Special Representative of the Secretary-General on Sexual Violence in Conflict, said that, “the road to healing is long, but always begins with sharing their experience and feeling heard.” As an anthropologist, I’m drawn to this social aspect that seems central to the approach. The testimony of one of the female participants featured in the video of the exhibition is telling, and deeply moving; she said that: “I learned to value many things, above all myself.” Why is it so important to incorporate a sense of community into the therapeutic process?

CB: Coming together in groups to sew is an ancient practice that women have used to share their joys and sorrows and feel supported, probably for thousands of years. The shame resulting from the violence isolates the sufferer, thus exacerbating their pain. To heal, it is critical to reduce this shame and to let women know they are not to blame. As they share their experiences, their shame reduces and a warm bond develops in the group. This is slow work; it takes over six months for the first two phases of the work, followed by another phase where the groups continue to meet independently. Women develop a strong group of trusted friends through the weekly meetings.

With the return of their confidence, comes a pride in their art work and a desire to speak out and help others who have suffered. Many survivors wanted their cloths to be displayed in the virtual exhibition, The Fabric of Healing, to raise awareness of sexual violence and the trauma resulting from it. We see this as an important part of building a ‘testimonial community’ and a way of witnessing and hopefully finding  ways to respond to these criminal and deeply unjust actions.

Creative healing work, although very important is only one part of what is needed. We cannot remain indifferent to these terrible crimes visited on the bodies of women and girls and increasingly men and boys –  there needs to be political will, economic development and legal redress. Silence breeds impunity. Accountability and justice are vital, and are also a critical part of the healing process.

Catherine Butterly is a psychotherapist, a trainer and Adviser for the Common Threads Project and the Programme Co-ordinator of the MA in Counselling at Webster University Geneva.

Sarah Grosso is an anthropologist and gender consultant. She works as professor and researcher at Webster University Geneva.