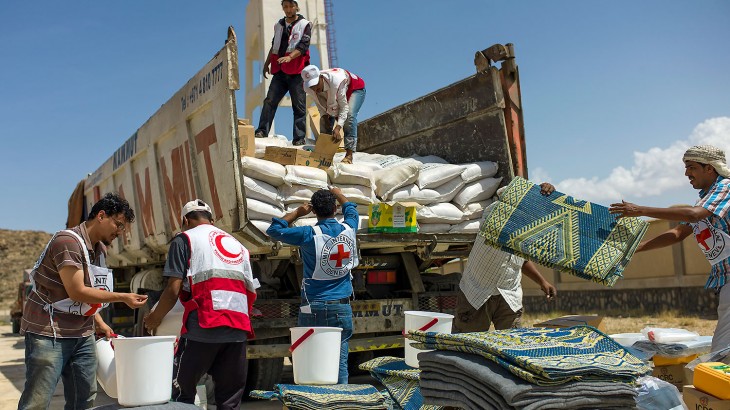 DESPITE ITS UBIQUITOUS PRESENCE, whether in crisis zones such as Syria, Yemen or the Congo, or day-to-day existence in both the developing and industrialized worlds, trauma often remains largely unrecognized and untreated. It is the same in the humanitarian sector. As a psychologist working for 30 years in the aid and humanitarian sectors, I have observed my own vulnerability – and that of others. (See Global Geneva article on Ed Gorman’s Death of a Translator on PTSD among journalists).

Stress, of course, is an entirely normal daily experience. It can motivate us to develop new strengths and skills. I am reminded of the Peace Corps refrain: “This is the toughest job you will ever love.”

For humanitarians, ‘common stressors’ includes a wide array of conditions such as hazardous living environments, relationship or communication issues, family problems back home, lack of privacy, and frequent transitions. Other typical stress factors are lack of leisure activities, boredom, uncertainty about work contracts, or having to deal with health problems. Humanitarian operations and organizations, large or small, all encounter such stressors.

One of the most debilitating and often unrecognized types of stress in humanitarian work is ‘cumulative stress. It results from the prolonged exposure to work and non-work stressors, and it is intensified when one feels unable to help.

In disasters and armed conflict, it can escalate quickly, exhausting your normal coping mechanisms. The physical symptoms can be overtiredness, diarrhea, constipation and headaches. Some emotional results are anxiety, frustration, guilt, and depression. Cognitive impacts can affect your job performance: forgetfulness or poor concentration. The results in personal relations may be feeling isolated, resentful or intolerant of others. One common result of incapacitating, cumulative stress is ‘burnout.’

Unhealthy behavioral changes include increased intakes of alcohol, caffeine, drugs, tobacco and addictions, as I have frequently observed. Some aid workers, for example, may drink coffee throughout the day and follow this with an extended “happy hour” into the night. This is typically “socially-acceptable” yet it is a warning of unacknowledged and mismanaged cumulative stress.

Less discussed but deeply impactful are feeling challenges to one’s spirituality or core beliefs about God, humans, and life.

‘Traumatic stress’ is caused by events that are shocking and emotionally overwhelming: the constant sniping targeting civilians in Sarajevo during the Bosnian war, the deliberate shelling of crowded market places in Somalia by rival combatants, managing nuclear catastrophe in Fukushima, or dealing with trapped earthquake victims in Haiti or Mexico. These stressors can and often do lead to more serious psychological difficulties. Some of these emerge relatively promptly; but delayed expression can also appear years later.

For some, their responses to major stressors can be mild and manageable, as was the case of a team I helped debrief who were held captive for weeks by a terrorist group. For others the impact can be extremely strong, even disabling. In one incident, Médecins sans Frontières in West Africa had to pull out an entire team because of severe psychological stress brought about by dealing non-stop with brutally savaged victims of violence, including women who had been repeatedly raped.

‘Post-Traumatic Stress Disorder’ (PTSD) can occur after exposure to extreme stressors (including ongoing or intermittent exposure) where there is the threat to oneself or others of death, serious injury or violence. It is accompanied by intense fear and feelings of helplessness, with distressing recollections, dreams or flashbacks along with hyper-vigilance and avoidance of anything that reminds one of the stressor. These symptoms usually occur within one month of experiencing the traumatic event, although ‘delayed expression’ of symptoms can also occur. These can include depression, anxiety, grief, and substance abuse.

WHAT TO DO? RECOGNIZING VULNERABILITIES AND RESOURCES

2. Model health. In some humanitarian settings, the worst stressors have to do with the culture of the organization and management style rather than security risks or lifestyle demands. Hence field leaders and managers can support their teams through more effective leadership styles, management practices, and their own behaviour.

3. Defuse stigma. Humanitarian workers can be reluctant to seek help. Both during deployments or even long afterwards, there may be a realistic fear that they will be seen as weak and inadequate for redeployment or promotion. Consequently they can often disconnect from their feelings and help perpetuate the “be-tough culture” that permeates the humanitarian sector.

4. Cultivate your resilience in five areas: character strengths such as perseverance and integrity; coping skills for stress management, self-care, work-life balance, and interpersonal relationships; mutual support for colleagues, friends and family; staff support and wellbeing resources in one’s organization; and a transcendent sense of purpose, meaning, and hope.

5. Stay aware, get help, and grow. Humanitarians are not unbreakable. So don’t overestimate your immunity; but don’t underestimate your resilience. Stay in touch with the stressors in your life and their cumulative and possible delayed impacts. If you get stuck from stress or trauma, get help. There are effective treatments for trauma, including exposure, cognitive behavioral, and EMDR (eye movement desensitization and reprocessing) therapies. Find safe places, people and ways to help you grow through the challenges of humanitarian life—and beyond.

This article is adapted from Module One by the author, in Confronting Stress and Trauma: A Resource Kit for Personnel Dealing with Violent Conflicts and Natural Disasters (2017), University of Worcester in association with UNITAR, Geneva (http://www.gist-t.org/). Used by permission. The descriptions of the different types of stressors is largely based on Managing Stress in the Field (IFRC, 2009).The opening quote is one of the over 60 humanitarian, peacekeeper, and journalist “Voices” included in Yael Danieli’s edited book, Sharing the Front Line and the Back Hills (2002, pp. 115-120).

Kelly O’Donnell is a consulting psychologist based in Geneva and the CEO of Member Care Associates. His professional emphases include staff well-being, global mental health, and integrity/anti-corruption. He is a representative to the United Nations in Geneva and New York for the World Federation for Mental Health.