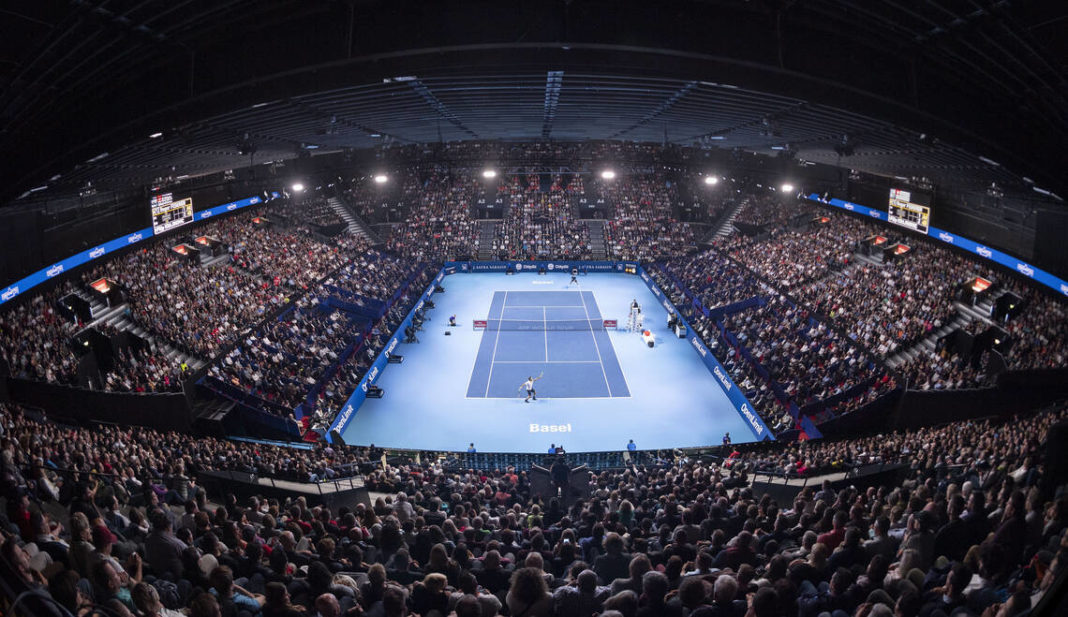 Finally he did it. The dreaded moment of his retirement, much anticipated over the past decade.

It came just after midnight on 24 September at the Laver Cup in London. The organizers bent the rules so that he could play only the doubles partnering long-time rival Rafa Nadal, who had to leave his pregnant wife behind in hospital to pay homage to Roger on the court on the night of Friday 23 September. I couldn’t help but remember Roger 9 years ago, when he lost to an even more unfortunate Juan Martin del Potro, who had to retire this spring because of a knee injury three years before. This is what I wrote:

The opportunity was too enticing to pass up: see Roger Federer, the master of the impossible tennis shot, competing at the top of his form, perhaps for the last time ever at 32, on his home turf. The prize: the Swiss Indoor championship, against 2012’s winner Juan Martin del Potro of Argentina, seemingly the most powerful man on the court these days and still only 25.

But back to Roger…

Federer, I think most people agree, plays tennis the way any sane athlete would want to, even if you never win a match.

You’ve read, I’m sure, about his balletic grace, his incredible athleticism, his down-to-earth manner of dealing with the media and defeat. For years he has seemed free of the emotional defects and outbursts that have destroyed many other high-flyers in sport. At the age of 25 he was the subject of an adulatory essay by the most likely U.S. candidate for a Nobel Literature Prize, David Foster Wallace (now sadly deceased). It described seeing him perform live as a religious experience.

What happens when Roger moves?

What I had never realized, despite watching him obsessively on television, was how, in real life, the earth seems to have very little hold on Roger Federer in motion. Del Potro may come forward sometimes with the force of an express train suddenly surging up close to you on the other side of the net. Federer just seems to be there where you don’t expect it, like a bat, or a kestrel swooping on its prey, or a flying crab — often all three at once — and then he flies off again before you know it.

When Roger is on form, even the ball seems to take on its own balletic path across the court. When he hunches over, preparing for a service, his ball-bouncing seems to have a quasi-musical pattern. And for at least part of every match he seems to be on perfect form.

The black hole of adulation

The trouble is, once you start watching him for the skill and beauty of his movements on court, you are likely to vanish down the black hole of adulation and not have any idea of what the score is or how well the other player is doing. The point is decided before you come out of the trance.

Finally I understood why video compilations and photos rarely seem to feature Roger Federer. His movements are just too perfect.

We prefer the effort to be visible: Rafa Nadal’s terrier-like straining painfully at the leash, Andy Murray doing his nut, Novak Djokovic’s supplications to heaven (or is it his coaching team?), even Delpo’s lunging frame as he hurls his 2m. body after a ball.

The Zen of tennis

Federer’s grand-jetées to the net,  his leaps to send a killer ball back past his opponent in a trajectory only he seems able to determine, crushing ripostes to a weak return — these we now take for granted.

We can almost replay in our heads second by microsecond his knees-bend, then his body rising in the air on his steel springs of legs, the racket reaching out high for the ball before thundering down to the other side of the court.

That’s a typical Roger serve. Even when it doesn’t work out, hits the net and bounces feebly away, or skitters out of bounds.

It’s the opposite of Zen. Do everything right even if it doesn’t succeed.

We saw all of this in Basel, and the crowd didn’t mind at all.

Roger-watchers, for want of any real gossip to feast on, have had to switch their obsessions to his entourage. First you must decide there’s no way to interpret what Federer means when he pushes back the curl on the right of his forehead or why he shakes his head, or why he will run up and down on the spot and swing his racket halfway through the match (it can’t be just to keep his muscles loose, can it?).

Even The New York Times plays this game. Its Wallace article on Federer had a photo of his Wimbledon chair from behind with this caption: ” Federer at Wimbledon is meticulous, down to the hang of his blazer.”

When he plays badly, you have to ask everyone around you: “Do you think his back is playing up again?”

Whom is Mirka texting?

After worrying about Roger you are ready to worry about his wife Mirka. Who and what is she texting on her cellphone at the start of the match?” Daddy’s not doing well. Won’t be long”. “Don’t forget to put the vegetables in the oven.” “What’s the weather like in Dubai?” Probably something like: “Don’t text me, the game’s started.”

I’ve no idea, and probably nor does anyone else in the media.

How can she look so calm when Roger, as so often, crashes and burns (almost as often as he pulls off the impossible shot). She never seems overwhelmed by his miracles or by his sudden collapses. How can two people be so level-headed?

The crowds in Basel certainly weren’t. If you thought the phrase ‘rocking the roof off’ was an exaggeration, Sunday afternoon would have taught you different. And a week later in London, commentators were using exactly this expression.

Even the Swiss President (that year it was Ueli Maurer by the way) and the popular ex-Swiss Minister of Sport from 20 years before, Adolf Ogi, came a long way behind Roger on the decibel meter of applause. In fact, they even came behind Juan Martin del Potro, it sounded to me. There’s a difference between applauding those who support sport and those who exemplify it (Roger is apparently three times more recognizable as Swiss than William Tell).

The Swiss weren’t pushy about their adulation. An hour before the final began, you couldn’t find an RF cap on sale anywhere in the stadium (which you could two and a half hours before, though only a few were available at the back of a shop inside the hall). Right up front were kiddy tee-shirts for Rafa Nadal. My wife suggested the organizers didn’t want Roger to think they were exploiting his achievements.

Inside the tournament hall, a group of what looked like mostly grey-heads had set up banners announcing they were Federer Fans. One slogan said “Roger”. The other said in Swiss-German something that can best be translated into English as “Finally…” (yes, I steal all my puns).

The final began with all the dignity of a boxing title fight: flashing spotlights, gladiatorial entrances by the two contestants, and a booming announcer to explain who the finalists were for those who didn’t know what to do with their photo-capable portable phones.

Then, with the ultra schlock of “Roger Federer, welcome home!”, proclaimed in English, the lights went up and the judge/umpire/referee announced something, which turned out to be that Federer had won the toss and forced del Potro to serve.

On road to the 78th trophy

Roger was after his 78th trophy from 113 finals, and this was his eighth consecutive Basel trophy battle.

Pretty soon, it didn’t matter who was winning.There were cheers and applause and stamping feet for virtually every point Federer made, and sometimes for him when he lost. I don’t think I’ve seen such a raucous Swiss crowd since my last cow-fight down the road in Valais.

There were the sighs and groans we have been accustomed to on television when Roger fails to deliver as we expect. Plus the usual agonized cries of “Ro-ger!” and” Roger – let’s go!”, while Mirka sat stoically there and even left for a while once Roger equalized.

Roger must know nothing

Federer himself, of course, has to pretend he knows nothing of what is going on in the stands during the game. No recognition of the ecstatic cries unleashed across the stadium by his unbelievable whip hand shots. Or of the” Ro-ger” clap-clap-clap seizures that periodically grabbed the stands.

After each round, to rapturous cheers from the fans — well, from the whole stadium — Roger did get up from his chair and take up position on court with a brisk “Let’s play some tennis, here” look on his face. Or maybe it was a deadpan “This is what I do” expression. It was hard to tell.

On television, the cheers bother me. They often don’t seem to have any justification.

They don’t. But, live, you can feel the pent-up nervous energy that has to find some means, any means, of expression.

Combine it with miraculous tennis and it’s no mystery why the crowds went wild at the place where Federer started as a ballchild (ballkid?) some 20 years before.

In the hall itself, time stands almost still except when the players move it. There’s only the match clock and the pace of the game as controlled by Roger Federer. Sometimes he would unexpectedly slow the ball and speed it up again like a human Large Hadron Collider.

Nothing to tell you how fast the earth is turning outside, and no way of telling whether the hurricane weather striking Britain had reached northern Switzerland yet. In these circumstances, the only question is: do the cheers and clapping last as long as they ought to in the universe of tennis physics?

Thanks for the applause

At the end Roger acknowledged the furore with appropriately measured words: “Thank you for the long applause.” He’s not one to mistake adulation for achievement.

One of Wallace’s nicest lines about Federer’s court skills was it’s “like something out of The Matrix”. Remember bullet time, when Keanu Reeves miraculously slows down time to dodge bullets.

We saw some of that in Basel, though Delpo gave us the Federer-inspired between-the-legs shot of the match. From the Swiss maestro the BBC noted “a majestic cross course winner” and “an overhead volley at full stretch”.

Generations in tennis are so short these days that del Potro could speak of Federer as an inspiration to him without it sounding absurd.

Peter Hulm is deputy editor of Global Insights Magazine and the Global Geneva newsportal. He denies being an avid tennis viewer.

Rafa Nadal had to leave his pregnant wife in hospital to play with Roger Federer at the Laver Cup. sports.yahoo, 28 September 2022 (LINK)

I was third best tennis player in the world but now I have nothing after devastating injuries and last effort for treatment in Switzerland, says emotional Del Potro. The Sun, 27 September 2022 (LINK)

Roger Federer Foundation: Based in Basel, this supports children and educational initiatives in both Switzerland and Africa. (LINK)