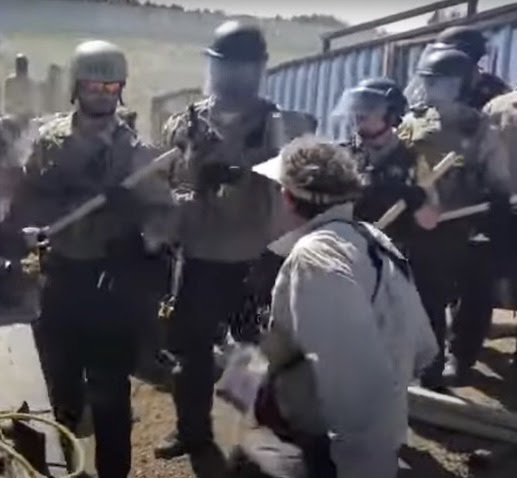 I always felt a wave of relief as wheels touched down at JFK after working in dicey places.

Foreign correspondents accept the risk. “It’s traumatic,” Jon Lee Anderson of The New Yorker once told an interviewer and then added: “I’ve been grabbed a few times, but I haven’t had to live as a kidnapped hostage in fear for my life for weeks or months—only a few hours.”

I’m less sanguine about it after ugly experiences in Africa and Central America. Bad luck or a tragic misstep can take a heavy toll. Most often, you can persuade someone up the chain of command to turn you loose. But that sense of injustice and impotence burns deep. (See Global Insights piece on British cameraman/producer Peter Jouvenal held for six months by the Taliban and recently released)

I always felt a wave of relief as wheels touched down at JFK after working in dicey places. Police in America, as departmental credos say, are meant “to serve and to protect” all citizens. Courts and review boards are supposed to hold them to account for any excesses. It is different now. The Second Amendment is fast overshadowing the First. Law officers at times act as private thugs for big-money corporations. Individual cops are often swayed by personal or political prejudice. That ballyhooed “day in court” can go badly with overzealous prosecutors and partisan judges.

This column by contributing editor, journalist and author Mort Rosenblum is from his regular comment The MortReport. Global Insights Magazine/Global Geneva Group are supporting Mort’s insightful and frank reporting from different parts of the world. If you can donate to his journalistic endeavour – based on decades of unique reporting experience across the globe – please do so.

All political cartoons by Global Insights contributing editor, Jeff Danziger, a member of our media partner, the Geneva-based Cartooning for Peace.

This is a national crisis. During police crackdowns in the Trump years, a protest sign evoked that post-Holocaust verse which ends: “Then they came for me—and there was no one left to speak for me.” It read: “First they came for the journalists. We don’t know what happened after that.”

My pal Alan Weisman faced exactly what that first paragraph describes in Minnesota last year while covering a protest for a Los Angeles Times op-ed about Line 3, a Canadian company’s pipeline that threatens waterways, aquifers and traditional Indian tribal rice fields. Now Homelands Productions, the nonprofit he runs with other seasoned old hands and some savvy younger ones, is creating a fund to defend reporters who face unfounded prosecution or frivolous costly lawsuits aimed at punishing independent journalists for reporting truth. Details are attached in links below.

Alan is a straight-up professional with long experience covering despots and demagogues. He wears multiple credentials on a lanyard, follows authorities’ orders and asks hard questions with studied respect. In custody, he is neither adversarial nor abject. He managed to hide his cellphone long enough to alert colleagues. Hubbard County Sheriff Cory Aukes took my call, among many others. He was polite but had no apologies. Journalists have no more rights than any ordinary citizen, he said. True. Nor do they have any fewer.

In a later public statement, Aukes said Alan refused an order to leave. Not true. In another, he said if deputies had known he was a journalist, he wouldn’t have been arrested. In fact, Alan had already spoken with the sheriff who nabbed him and addressed him by name. He was from a different county, which also benefitted from the Canadian company’s largesse.

He was charged with gross misdemeanor trespassing, punishable by a year in jail and a $3,000 fine. Alan’s lawyer got the Hubbard prosecutor to hold off. Even at a discount rate, that cost $15,000. Alan lost months of work on a follow-up book to “The World Without Us” and “Countdown” that examines global crises. Charges were dismissed “without prejudice,” meaning they were left in suspension. Bad news could still end up in Alan’s mailbox.

That was one of countless small outrages. The Uvalde school massacre was a big one. Police corralled reporters, handcuffing some, with self-appointed vigilante help from bullies and bikers who manhandled them, hurling invective at “scum” who had no business there. We needed eyes on those Keystone Kops who dithered for more than an hour.

The larger issues are devilishly complex. Today, hordes of “citizen journalists” and online outlets swarm major scenes. Often those with the thinnest grasp of ethics and professional conduct object the loudest when police attempt to secure crime scenes. Even when far fewer “media” covered big stories, police often rankled at intrusion. When the Concorde crashed near Paris in 2000, I climbed a hill for a look at the distant site. A cop stopped me, cursing a blue streak at a cheap-thrills seeker who did not belong there. He scowled at my explanation: I was reporting to 10,000 newspapers and broadcasters for the Associated Press.

But, happily, working journalists need no official credentials. The First Amendment applies to everyone. Had a brave teenaged girl not captured video of that fatal knee on George Floyd’s neck, a de facto summary execution would have gone into the records as a “righteous” mishap.

At times, even that is not enough. A friend recorded the chokehold on Eric Garner, arrested on suspicion of selling untaxed cigarettes on Staten Island in 2014. A grand jury declined to indict Officer Daniel Pantaleo despite clear video evidence. (He was later fired for that chokehold. “I can’t breathe” is painted on the pavement at the George Floyd Memorial.)

In the United States, 18,000 federal, state and local law enforcement agencies operate under their own rules. Many are well-run, with courageous officers doing a dangerous job. Others are Boss-Hogg disgraces that give sadists and ill-trained misfits a license to kill.

Police unions staunchly resist body cameras, civilian oversight or standards enforced by the Justice Department. A new Arizona law forbids anyone to film police activity closer than eight feet away. Officers, routinely given the benefit of doubt, are likely to stretch that limit.

The George Floyd killing sparked massive protests, a constitutional expression of free speech and public gathering. Some got violent, often inflamed by provocateurs, which led to brutal, illegal mass arrests. And that prompted the battle cry that backfired on Democrats: Defund the Police.

Reforming the police, with help from social workers and psychologists, is a long-term challenge for enlightened leaders, which in America are now in pathetically short supply. Meantime, we need to protect reporters from police and politicians — and from companies that coopt them.

In Alan Weisman’s case, sheriffs with American flags on their sleeves have accepted millions in funding from Enbridge Inc., a multibillion-dollar company based in Alberta, which operates more than 17,000 miles of pipeline in North America and aims to lay much more despite local objections.

And there is another aspect. Even big news organizations with legal staffs face nuisance suits by vengeful individuals and companies seeking to cow editors into self-censorship. Justices who overturned Roe v Wade could next turn to Sullivan v New York Times, which makes it hard for public figures to sue for libel.

Independent journalists especially face grave danger. If citizens do not stand up to help shield them from arbitrary arrests, punishing lawsuits and organized smear campaigns, “truth” is what any Trump-think authoritarian decides it ought to be.