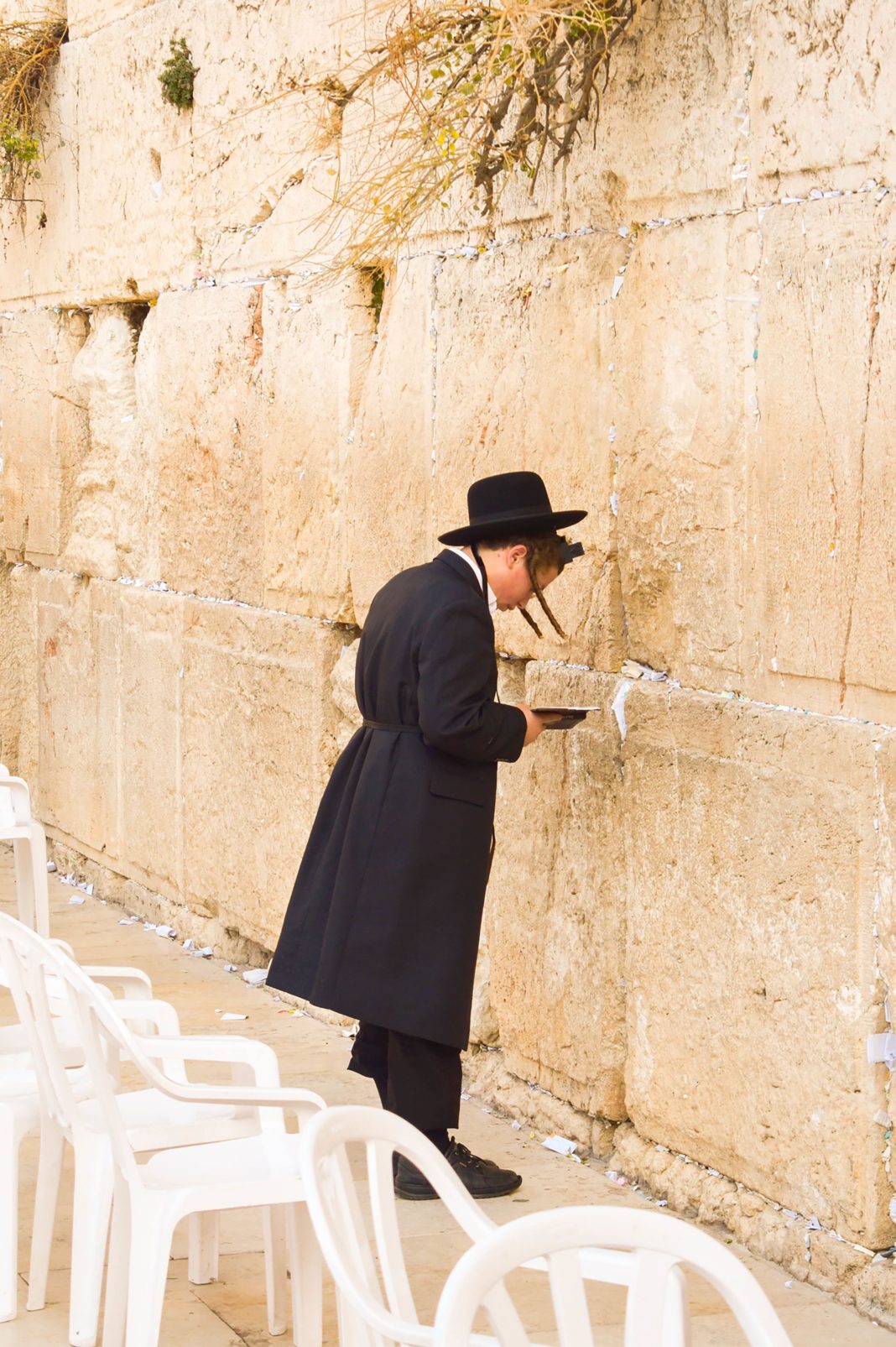 The following column by contributing editor, journalist and author Mort Rosenblum is from his regular comment The MortReport.

Jews have come a long way. Had a Supreme Being not eased our forbears’ Red Sea border crossing out of Egypt to escape slavery, they’d have drowned. Forty years in the desert must have been tough. Matzo is no match for thin-crust pizza. Finally, they arrived uninvited into occupied land, followed by Romans, Crusaders, Ottomans, the British and a lot of others.

I am leery of uncheckable sources chipped into stone, scratched onto parchment or one-sided accounts from conquerors and the vanquished. Let’s fast forward to today.

I grimace when someone calls me a landzman. The Yiddish term suggests Jews are a tightly knit tribe of chosen people, especially the Ashkenazi who repeatedly fled European ghettos a few steps ahead of murderous mobs. True, we share that Shylock taint. Barred from owning land, narrowed options included lending money to rich goyim. But it is a bit more complex.

Global Insights Magazine with our non-profit association Global Geneva Group make this content available for free worldwide in the public interest. If you like our approach to independent journalism and writing, then please join us as a support member or contribute. (MEMBER AND DONATE LINK).

Jews come in three flavors. The Orthodox live their faith as devout Muslims do, with strict dietary laws, and quibble at length over ancient texts. Conservatives are Orthodox-lite. Reform Jews are relaxed about it all. Those like me were bar mitzvahed to keep mothers happy, are fine with meatball milkshakes, and say, “Oh, right,” if wished a happy new year when it’s not January. But we all share a heritage and culture. We mourn family lost in the Holocaust. And when applying for visas in Muslim countries, we’re all the same.

Israel is only peripherally part of the deal. It is just a country; we don’t have a Vatican. If we had a pope, it would hardly be Bibi Netanyahu. Still, I can think of no Jew, however lapsed, who isn’t happy there is a homeland for those who want it, meant to be a showcase of the do-unto-others creed that defines Judaic morality and a bulwark of democratic stability in the world’s roughest neighborhood.

As kids, we dropped lunch-money quarters into little blue boxes to plant trees in a holy land. They were not meant to buy bulldozers to uproot centuries-old olive trees when frustrated Palestinian kids lobbed rocks.

The 1947 deal gave Israel 460 square miles carved out of British Palestine. Both sides claimed Jerusalem, holy also to Christians; it was left up for grabs. Arab armies attacked the day after independence in 1948. Ten months later, Israel controlled 60 percent of land attributed to Palestinians, including those oft-lamented orange trees in Jaffa.

In 1956, Gamal Abdel Nasser nationalized the Suez Canal, owned by Britain and France. More war. He invaded in 1967, the Six-Day War. Remember those Egyptian boots in the Sinai sand, abandoned by troops fleeing for their lives? But, yet again, Egypt, Syria and others attacked in 1973, the Yom Kippur War. Indisputably, Israel had to protect itself.

David and Goliath switched roles in 1982. Guerrillas in southern Lebanon lobbed noisy random rockets into Israel — Katyushas — from the Soviet Union’s World War II stockpile. Israeli tanks supported by aircraft poured across the border, headed for Beirut. I hurried to the beach town of Nahariya, up north, for the Associated Press.

One young woman chilled my blood. She told me how worried she was for the Israeli Defense Forces. “The Arabs aren’t like us,” she said. “We love our brothers and sons.” Palestinians, she added, are animals. I had just toured Gaza and the West Bank. Decent people lived under the thumb of Palestinian faction leaders they did not elect, who condoned the terrorism that most reviled. Though bitter at being dispossessed — wouldn’t you be? — most wanted negotiated peace.

In Lebanon, I got a hard look at what I call the subway solution.  Picture rush hour under Times Square. A SWAT team spots wanted terrorists boarding a train among office workers, moms with kids, tourists and hapless others. The easy option is to blow up the platform.

I saw 500-pound bombs drop on Ain-al-Hilweh refugee camp near Saida. Terrorists had dug in next to it, expecting what might happen. Like Hamas today, they knew footage of mangled infants and wailing survivors would further their cause. Israeli censors killed my dispatch for “security reasons,” as if refugees might learn from AP they were being bombed. Later, I watched artillery obliterate Damour, a rich Christians’ seaside playground near Beirut. The PLO’s headquarters was destroyed. And the town was reduced to heaps of twisted iron and slabs of formerly ornate homes.

“Collateral damage” is a scourge of war. To our lasting shame, Americans have killed countless non-combatants, from Indochina to Iraq, with much in between. But, at least, wars are different from rooting out entrenched terrorists.

The official policy I saw in 1982 has evolved into collective punishment, which smacks of what the Nazis did by razing whole villages because of a resistance fighter in their midst. Spare me lectures about Hitler. My name is Rosenblum. Jews must be better than that. Israel can pinpoint perpetrators without massive firepower designed to show strength and, as Netanyahu put it, to teach Palestinians a lesson they won’t forget.

In any case, the subway solution creates a visceral lust for vengeance that lasts for generations along with international contempt. It is a war crime. So are Hamas’ terror assaults. Israel must answer to a higher standard.

Hamas killed 12 people last month in a country of 8.7 million with rockets that got through the Iron Dome. That is no small number. Families huddled indoors for days, fearful of sudden death from an unlucky hit. Israel responded with fire on 2 million people trapped in Gaza. Hamas, hardly a reliable source, said they killed 240 Palestinians, including 66 children. For a clear picture, we need credible reporters on the ground. But the first missiles leveled the building that housed AP and Al Jazeera. For 11 days, foreign reporters were kept out of Gaza.

To understand the realities, and for improbable comic relief, watch a 2011 French-German-Belgian film, “When Pigs Have Wings.” A fisherman, forced to troll a narrow coastal strip, polluted and nearly fishless, pulls up discarded shoes and garbage until he nets a live pig that fell off a ship.

A Muslim, he is repulsed. But his family is hungry. He tries with no luck to sell it to a German U.N. official. Finally, he finds a young Russian kibbutznik, who raises pigs to sniff out terrorist bombs. But she only wants sperm. He tapes up a sexy Miss Piggy pinup to set the mood and eventually fills a vial.  Near the kibbutz, a bullying PLO sentry stops him and, thinking it is some helpful tonic, quaffs the porcine sperm. He extracts another. Much follows, and the message is clear. People are people. Palestinian and Jews end up, literally, in the same boat.

Then watch “Oslo,” just out, a docudrama with Steven Spielberg money that shows how secret face-to-face meetings brought Yitzhak Rabin and Yasser Arafat into Bill Clinton’s White House, beaming and shaking hands. That 1993 accord recognized Israel’s legitimacy, put a negotiated status for Jerusalem on the table and drew clear lines in the West Bank. Two years later, a Netanyahu supporter assassinated Rabin, and peace talks stalled. Three years after that, Arafat yielded to extremist factions and backed away from earlier compromise.

Shimon Peres, as foreign minister, helped negotiate the Oslo Accords. As Israeli president, he insisted on a two-state solution. But Reuven Rivlin took over in 2014 and declared, “I wholeheartedly believe that the land of Israel is ours in its entirety.”

Then Gaza exploded. Hamas murdered three young Israelis. Netanyahu hit back hard. Hamas unleashed rockets, provoking the subway solution: swatting a wasp with a sledgehammer. At least 2,000 Palestinians died. Israel won a battle in a war it well may eventually lose. This time around, Wallace Shawn, the actor, drilled down to the crux: “The anger of the Palestinians cannot be ended by killing their children.”

No one has an excuse for ignorance of the facts. Yet in a lifetime of reporting, I’ve never seen so many intelligent people, having never been to the Middle East, consistently blot out observable fact. Or so many others incited to violent attacks by obvious distortions, now riled up an internet that spews anti-Semitic hatred.

The latest spark comes down to a desperate politician, fighting to retain power and stay out of jail, sparring with an unpopular terrorist group eager to increase its clout in Palestine’s leadership vacuum. If embers burst into flame, the potential conflagration is unthinkable.

If Netanyahu goes, his tapped replacement espouses an even harder line. If Hamas is crippled, Iran can channel its aid elsewhere. Each year, weapons of gruesome destruction get smaller and deadlier, and more desperate people are prepared to use them. Meantime, International support for Israel wanes. For the first time, tough Israelis – Yudonazis – fought with Arabs within Israel. Rightwing politicians hurl death threats as parties seek a workable coalition.

Donald Trump abandoned America’s role as a good-faith mediator to satisfy Republican funders and Christian evangelicals. He turned Iran into a bitter foe, eager to exact payback. Joe Biden, wisely, is keeping his diplomacy secret. But politics at home limit his options.

As all of this plays out, here are some thoughts:

In Jerusalem, I once met an Orthodox black hat with all the trimmings, who launched into a tirade. In a mocking, wheedling tone, he dismissed all Palestinians as fractious murderous children in need of a once-and-for-all lesson. When I disagreed, he spat out that epithet, which boils my blood: “You’re a self-hating Jew.” I glared at him, prominent nose to prominent nose, before replying: “No, I’m not the Jew I hate, motherfucker.”

Yet there is plenty of humanity on both sides. On a Thursday night in Tel Aviv, the bars are alive with young couples eager for peace, side-by-side with a Palestine open to the world. Plenty of elders agree, fed up with endless escalating confrontation.

In 2001, a suicide bomber killed 20 kids in a Tel Aviv disco, and I found understandable outrage. But an AP colleague talked to Mazan Julani. After a settler killed his son, Julani saved a Jewish stranger’s life. “I donated his organs to save lives,” he said, “no matter whether they were Muslims, Jews or Christians.” This time, CNN reported a similar case in reverse. Yigal Yehoshua, a Jew who died days after Arab Israelis beat him in Lod, left a kidney to Randa Aweis, a Palestinian woman who had waited years for a transplant. In thanking the family, she said: “We should live together. We should have peace. We should be happy.”

Israel and Palestine need to find the common ground that negotiators discovered while drinking Johnny Walker Black together by a fire in Norway. Unless reasonable people come to terms, there may not be an Israel for anyone.