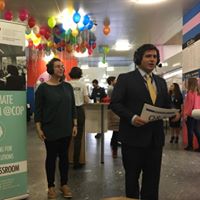 William Pfaff, who died last Thursday of a heart attack, had one great gift when it came to analyzing international affairs: it was not radical insight, but common sense. When you listened to him, the world made sense.  The Atlantic’s James Fallows offers a stirring commentary on a man whose success in life stemmed from maintaining a sense of balance in an environment that was anything but balanced. Bill Pfaff, in short, possessed a rare gift of clarity at a time when we all seemed to be blinded by confusion, obfuscation and the sophistry of spin doctors. Fallow’s tribute and an index of some of Pfaff’s articles are available on line [click here].

Bill Pfaff was extraordinary in his openness, lack of pretension and readiness to try something new, but only if he thought that it would make a real contribution.  He ran the Paris office of the Hudson Institute in the mid-1970s.  After the office closed, he mentioned that he was interested in staying on and trying his hand at freelancing. The next anyone knew, he was writing for the New Yorker, and then the Paris Herald Tribune, and finally he  syndicated himself around the world.  I casually mentioned that computers were coming in, and might be valuable to a writer.  “I don’t think that it is helpful in the kind of writing that I do,” he said. The only computing he needed, in fact, was supplied by his own mind.  He was sharp enough not to be distracted by fashion. .

I had a phone call from him a while later.  He explained that stragglers talking loudly in his courtyard late at night were keeping everyone awake; did I know where he could buy a Super Soaker water gun to encourage them to move.  I was impressed both by the playfulness of the idea and by its basic pragmatism. It was a perfect answer to an annoyance that had been bugging us all.

Bill Pfaff was proud of the fact that  had been one of the first recruits in the US Special Forces, at a time when the entry requirements favored not only exceptional prowess but also a graduate degree, fluency in a foreign language and at least one additional extraordinary skill. Bill had all of that. He was far above average as a  man of action, but in the end, as James Fallows pointed out, his greatest legacy stems from the clarity of his insight.

A video to re-inspire us in humanity