Two months into the new United States administration, US President Donald Trump has already had an impact on international law, and the international legal system that now appears on the brink of unravelling. Executive Orders intended to modify or withdraw from legal obligations by the US government will affect the United Nations, human rights, refugees, international trade, the environment and limitations on the use of force.

Three of Trump’s executive orders have a bearing on immigration and human rights and they impose dramatic restrictions on asylum and other immigration protections in the United States. These breach the 1951 Convention Relating to the Status of Refugees, the International Covenant on Civil and Political Rights, the American Convention on Human Rights, the International Covenant on Economic, Social and Cultural Rights and the Convention on the Rights of the Child.

The 1951 Refugee Convention, for example, obliges governments to observe the principle of non-refoulement. It prohibits parties from expelling or returning refugees to territories where their lives or freedom would be at risk. The Border Enforcement Order violates this agreement by directing the Department of Homeland (DHS) to expand “expedited removal” to the maximum extent possible.

This executive order alone threatens the lives of up to 11 million illegal immigrants. It will exponentially increase the likelihood of refoulement. The criminal penalties under the new policies violate international law and fail to protect basic refugee rights. The Refugee Convention also prohibits the imposition of penalties on refugees for unauthorized entry or presence in a country. Trump’s policy of prosecuting and penalizing undocumented entrants without consideration for why they fled is a breach of the international obligations of the United States.

International trade agreements and the global trade system have also been put at risk. Trump intends to terminate agreements pertaining to international commerce and trade, beginning with the Trans-Pacific Partnership (TPP) and the North American Free Trade Agreement (NAFTA). President Obama signed the TPP, but the agreement required Congressional approval, was never debated and consequently never entered into force. Trump’s “un-signing” the TPP—the largest regional trade accord in history—as a matter of unilateral Executive power was straightforward. It went ‘puff” with the stroke of a pen.

NAFTA, in theory, requires six-months notice before any of the partners can withdraw. Nevertheless, it was implemented by congressional-executive agreement, and it is unclear whether Trump has the authority to withdraw without the support of Congress. However,since Trump is a Republican and Republicans control both houses of Congress, it is a moot point. What is clear is that if the U.S. retreats from the global economy, other countries will fill the vacuum, notably China.

Trump has also suggested that the US could withdraw from the World Trade Organization (WTO). The WTO treaties were congressional-executive agreements approved and implemented by Congress. Withdrawal would require consent from both houses of Congress as well as the president. There is no question that a withdrawal would significantly affect the ability of American companies to access foreign markets. It would also make them vulnerable to customs, duties, tariffs and regulatory barriers. In addition, American firms would no longer be able to challenge expropriations and other commercially discriminatory actions before international tribunals. Global trade and commerce would become much more unpredictable. International markets are already beginning to show signs of instability.

The most important function of international law is the prevention of war. The Iran Nuclear deal, also known as the Joint Comprehensive Plan of Action (JCPOA), was concluded by the United States, the EU and five other countries precisely to ensure that Iran could not build a nuclear weapon. The intention was to avoid war, especially with Israel. Trump has called the JCPOA “the worst deal ever negotiated,” and declared that ending it would be his “number one priority.” The JCPOA is a political commitment that turns on technical—and thus far successful—verification measures. US denunciation of the JCPOA would not only risk an international confrontation, it would also be harmful to Western companies seeking to do business in Iran and to the legal regime for the control of nuclear weapons. It would send a dangerous signal to paranoid elites who control nuclear weapons.

The Trump Administration will most likely attempt to undercut more ratified treaties which impose international legal obligations on the United States. The US Supreme Court has not settled the question of whether the President can unilaterally withdraw from treaties or congressional executive agreements. However, whether any state can withdraw from, denounce or terminate a treaty is not merely a domestic matter. It is also a matter of international law which requires either compliance with a specific withdrawal procedure or narrow exceptions.

Under the 1969 Vienna Convention on the Law of Treaties, a state may only withdraw from or otherwise terminate its obligations if the treaty itself permits, or with the consent of all parties. Without such clauses, which can vary widely with many specifying a fixed term of years and/or notice period, the treaty is presumed to continue indefinitely. Failure to comply with the Vienna Convention procedures means that a US withdrawal would not be considered legal by the international community.

Flouting international law has consequences and risks blowback. It encourages similar behavior by other countries, often powerful ones. If the US government breaches the 1951 Refugee Convention, other states are also likely to suspend the Convention. In the first months of the Trump Administration, for example, Russia violated the 1987 Intermediate Range Nuclear Forces Treaty (INF) by a missile deployment. A Russian surveillance vessel sits in waters 30 nautical miles from the east coast of the U.S., and the Kremlin continues to breach the UN Charter by annexation of Crimea. Strongmen in Turkey suppress expression and in the Philippines execute citizens extra-judicially; China re-asserts aggressive maritime claims, and North Korea threatens nuclear war.

Charles H. Norchi is Professor of Law and University Trustee Professor in the University of Maine School of Law, USA, and a contributing editor to Global Geneva. 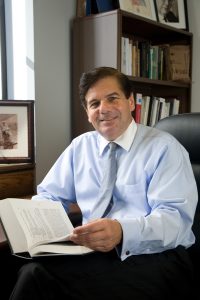