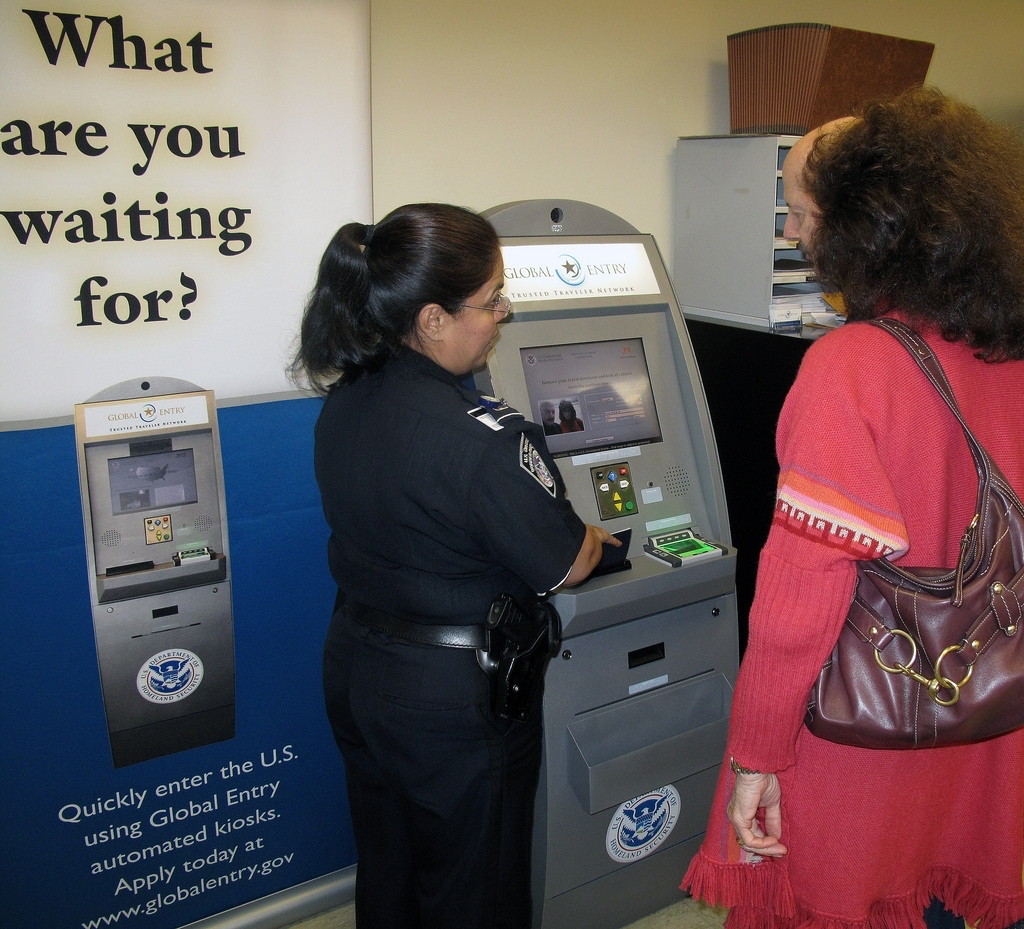 A bit over the top? Government obsession with terrorism can go a bit too far. Recently, a Geneva-based UN official flew into Heathrow for a slew of high-level donor meetings in London. A Her Majesty’s Border Force agent was not at all impressed by her light-blue UN laisser-passer nor her western passport. And he scowled at her dubious entry form.

“What’s an un-official?” he asked.

He cocked an inquiring eye.

“Syria? You have met with Syrians? Please step this way, Madame.”

He queried her in a side-room about her clearly questionable Syria affiliations until a policeman arrived. Shaking his head in silent dismay, the officer proved somewhat more world-savvy. “Our apologies, Madame,” he said, escorting the bemused UN coordinator back to the exit lines. “Our immigration colleagues do get carried away.” LG

And then there’s the US terrorism obsession… Not to be outdone, America’s Homeland Security take an even dimmer view of non-conformist travellers. One American student, who had flown to Europe to meet with her family for a two-week break in the UK, Switzerland and the South of France, found there was a bit too much security than homeland when she returned.

The family had advised her to come with only carry-on, as she could always borrow clothes. This way she would not have to pay any extra EasyJet baggage. On her flight back to Houston, the student was stopped at Kennedy by US Customs and Border Protection (CBP), which is part of Homeland Security. They wanted to know why she was only travelling with a carry-on backpack and a handbag after visiting three countries in Europe. No suitcase?

“Perplexed, the young woman said: “But I didn’t need one.”

Homeland Security insisted on detaining the highly suspicious young woman until she missed her connecting flight. She had to buy a new ticket which the CBP refused to reimburse. When the family called Homeland Security to ask why people are not allowed to travel with only carry-on given that this is precisely how many seasoned travellers now do, the only response was a very humourless: No comment. AR

Not like in the zoo… Seeing elephants in the wild is an aspiration for many of us – until they actually run wild, that is, writes Leyla Alyanak. “While visiting Yankari national park in Jos, central Nigeria, with fellow environmental writers, they found ourselves picking their way across a narrow bridge. It wasn’t quite a bridge, more like twin rotten planks stretching over a seemingly bottomless chasm. Suddenly we sighted an elephant, beautiful, gigantic and unexpected after years of wildlife neglect.

But then, agitated, she turned, a baby emerging from behind. We froze, aware of how violent a protective mother could become. She reared her head, flapped her ears, and faster than we could slam on the brakes and slap the Landcover into reverse, she surged to the edge of the ravine. There she stood, snorting, a few meters away, edging closer. In mounting panic, we shot backwards across the rickety span. I clambered out the window and heaved myself into the rooftop luggage rack to help the driver across, praying my final moment wouldn’t be spent hugging a backpack. We made it to the other side, the elephant stayed on hers. But at least we didn’t find ourselves at the bottom of a Nigerian cliff.”

Overheard in Pakistan… Two British visitors entered an Islamabad pharmacy asking for sun-tan lotion. The young shop assistant had no idea what they were talking about and asked his older colleague. But the latter had no idea either. “What exactly is this suntan lotion?” he asked.

“Oh, you know, you put it on your body and it makes your skin turn brown,” one of the Brits said.

Both Pakistanis looked pained, but still anxious to be helpful. “I am terribly sorry, sir,” said the older one. “We have not got this suntan lotion.” When the two Brits left, the man turned to his younger colleague: “Typically English. Always taking the piss out of us.” PJ

Swiss pay on time… One expat working for a Geneva-based NGO was voicing his frustration about how so many Swiss fail to understand that if you travel a lot, you cannot always pay your bills on time. When he rang a local utility company to apologize given that he had been in Africa visiting projects, the administrator on the other end admonished: “Well, Monsieur, if that is the case, then perhaps you should not travel.”

Zimbabwe is heaven… A now South African-exiled Zimbabwean teacher who had been arrested and beaten by President Mugabe’s thugs was released after several days. On leaving jail, a senior policeman told him that he should be ashamed of himself. “This is a wonderful country,” the policeman had insisted. “Zimbabwe is now the richest country in Africa. How else do you think our President and his people can live so well? We are the new whites except we are better.”

The teacher could only laugh. “Of course, we all know how Mugabe and his ZANU-PF people live, but I’m not quite sure which ‘people’ this man was talking about. The other 95 percent who live no better than dogs?” TR

Good news for those holding Zim dollars though.  According to Mark Butcher of Geneva’s World Radio Switzerland, the Zimbabwe dollar rose following British Prime Minister Therese May’s Brexit speech to the Conservative Party Conference at the beginning of October. No one is quite sure what this means for Britain. Or Zimbabwe. Maybe some sort of union with Mugabe now that the EU has been rejected.

Have gun, will travel. You never know when you’ll have to shoot your way out of a sticky situation. According to a recent Washington Post story, Jim Cooley regularly packs an AR-15 assault rifle when visiting his local Walmart superstore.  On a visit to Atlanta, Georgia’s International airport, a major international hub and potential terrorist hot zone, Cooley expanded his usual load of ammunition with a 100-bullet drum magazine. Enough presumably to take on a battalion of bad guys. Cooley’s wife was not amused. Refusing to go to Walmart’s with him, the Post reported that she blurted out: “I am not going to sit there and have the police called on you. I mean, I don’t want to see that crap.”

In the US, Georgia’s free wheeling love of guns does make one feel edgy, but the rest of the US appears almost equally determined to act out Hollywood-style. It’s now legal to carry guns openly in 45 of the 50 states, and 14.5 million pistol fanatics are overjoyed to do so. Despite some unsettling statistics, most of these guns aren’t used against people. The real function appears to be one of giving their owner a sense of power at a time when inequality is squeezing the middle class out of existence and any sense of control is fast slipping away. WD

Forget Jo’burg. South Africa’s O.R. Tambo airport in Johannesburg is becoming increasingly chaotic with travellers, now waiting two or three hours, even longer as one jumbo load of passengers after another jam into arrivals. Journalist Graham Boynton noted that there were only three immigration desks dealing with 1,000-1,500 arrivals, making for a lot of peeved off people. And this was not even peak season. Others note that it’s time for Home Affairs to jump on the job creation bandwaggon and “start welcoming our visitors in the way the rest of South Africans do. What is happening with our visas and our arrivals is a disgrace!” The good news is that Capetown and other South African airports seem to be operating efficiently.

Switzerland’s most expensive stretch of autoroute. Swiss public relations is not helped when it comes to currying favour with transit visitors simply wishing to drop off or pick up passengers at Geneva airport. Despite constant urgings to declare the 11.8 km stretch from the French border at Bardonnex to Cointrin as ‘open’, the authorities insist on obliging drivers to pay the full 40 CHF annual highway fee. Nor do they tell drives that they can avoid paying by driving through Geneva. All this leads to a lot of un-necessary agro and upset potential tourists, who perceive this more as Helvetic greed than anything else.

SwissRail not doing itself any PR favours either. For those who purchase SwssRail’s annual half-price card (200 CHF a year), travellers are now tied into automatically re-newing. (It’s all in the small print!) Until recently, you could do this whenever you liked given that not everyone takes the train on a regular basis. Your ID details would remain on file. All very user friendly. Now, however, SwissRail sends out threatening letters demanding that you re-new immediately.

The fact that customers might prefer to make this decision on their own does not seem to occur to the company. According to SwissRail, it decided to impose this because 60 percent of passengers automatically renew. “So we decided everyone should do it,” noted one representative. Another offered this curious explanation with regard to the hapless 40 percent: “We can’t cancel your card unless we get a confirmation that you are not living in Switzerland at the moment. Those policies seem threatening to you but you signed them and we wouldn’t have set up the system like that if we knew the majority of the people don’t renew it.” So does this mean that anyone living in Switzerland doesn’t have the right to cancel? Or is this SwissRail’s version of Brexit? Go figure.

Aid Speak… The following is to help ordinary human beings understand the impressive but often incomprehensible-sounding terminology of the international aid community.

Accountable: Key UN buzzword. Indicates readiness to be criticised, but would prefer not to.

Beneficiaries: Aid-speak for turning disaster victims and refugees into commodities.

Donor: Government that provides grants to NGOs allowing them to call themselves non-governmental.

Empower: Lending ordinary human beings the impression that they have a say as long as they don’t.

Inclusive: A ‘challenging’ word that no one really understands, yet creeps into every self-respecting UN or NGO report. It is vital to be ‘inclusive’ so as to come across as inclusive, a bit like Putin’s annexation of the Crimea.

Nansen passport: The only time in history when refugees had an aristocratic class.

NGO: A cheap way for governments to get their dirty work done.

Opportunity: A promising initiative that could ‘empower’ but donors can’t be bothered.

The Swiss commune that changed ecology