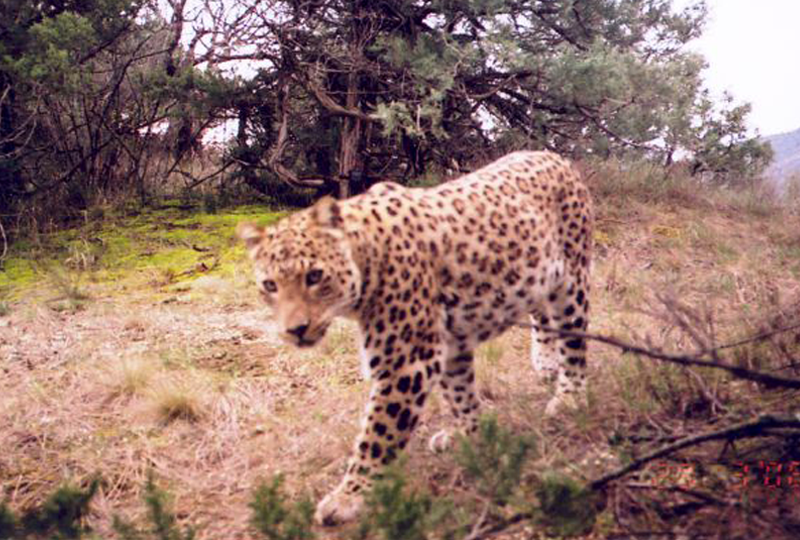 As the logo of the Caucasus Nature Fund (CNF), the Caucasian or Persian Leopard is an endangered – and declining – species. Fewer than 200 individuals are believed to be still roaming the Caucasus, Hindu Kush and Caspian Sea regions.

The victim of poaching, illegal logging and other incursions on its habitat, the animal remains a cherished symbol for this multi-partner conservation trust in its efforts to improve the management of up to 20 South Caucasus nature parks and reserves. But – a sign of their desperate plight — barely ten leopards are reported to survive in the rugged Khosrov State Reserve on the south-western slopes of Armenia’s Geghama Mountains.

The largely mountainous South Caucasus is ranked as one of the world’s 35 “biodiversity hotspots”, an exceptional biologically rich and culturally diverse eco-region. Spread over three countries – Armenia, Azerbaijan and Georgia – no other temperate climate zone has more biodiversity per square kilometre. Only a quarter of the Caucasus region, however, remains in reasonable condition. Less than 12 percent of the original vegetation, including forests, can be considered pristine. Other endangered species include the Caucasian Turs, Caucasian Red Deer, Wisent or European bison, Goitered Gazelle, Brown Bear, Striped Hyena and Gmelin’s Mouflon, plus vulnerable fauna and flora that include birds, salamanders and plants.

Since 2010, the CNF has been providing long-term support to protect the region’s unique flora, fauna and ecosystems. Even though two of its member countries are at war – Armenia and Azerbaijan – the Fund does this by backing operating costs, such as technical assistance and training, electricity, fuel, ranger uniforms, the refurbishing of park information centre, and tailored initiatives to promote more sustainable conservation approaches.

“Basically, we’re trying to encourage the involvement of local communities and to make sure that the parks and reserves are better managed,” said Geoff Giacomini, CNF’s Executive Director in Tiblisi. “We’re also looking at ways of encouraging eco-tourism so that all will benefit.” Since 2010, the CNF, whose key partners include the German Development Bank-KfW (www.bmz.de), WWF-Germany  wwf.panda.org), Conservation International (www.conservation.org) and the Global Environment Facility/GEF (www.thegef.org), has provided 50 percent of its long-term support in the form of matching grants to protect the natural and cultural heritage of the Caucasus. “We expect the governments concerned to provide the other 50 percent and increase this year by year so that they do not become reliant on outside funding,” he added. “The end goal is to help make the parks sustainable.”

For the moment, some of the Fund’s recommendations have yet to be implemented. As Giacomini and his team note, there are still numerous problems, such as poaching and illegal logging. “But the cutting of trees is understandable if there is no gas and people need to exploit the natural resources around them,” he said. The local communities also give the efforts a very mixed bag of reactions. Some are extremely positive, others less so. Certain groups are deliberately undermining the Fund’s initiatives, CNF officials suspect.

Nevertheless, with the current push for eco-tourism plus other forms of development, many local people are beginning to understand the need for wildlife protection. “The guest houses are generally full in the summer and, depending on the parks, we’re seeing a rise in both national and international tourism,” he noted. Visitors include individuals, but group tours have also come from Georgia, Russia, Israel and other parts of Europe. Some visitors respond to specific interests, such as organized bird-watching or painting, enticing tourists from the United Kingdom and Germany. Bike-riding attracts people from Poland and the Czech Republic. Local and Diaspora Armenians come to the Caucasus in search of their cultural heritage. The more established parks are attracting the bulk of visitors but infrastructure overall is improving. The parks are also increasingly bringing in school children to better explain the importance of conservation.

As Giacomini stresses, much of what they are doing is to explore what works and to establish priorities. One crucial programme is biodiversity monitoring of plants and animals. This means establishing baseline data to determine whether CNF interventions are having an impact or not. While wildlife is already increasing in some parts, another initiative is exploring how to curb poaching. “This may mean managed hunting. We’re looking for ways to get poachers away from the endangered species and to promote sustainable hunting, particularly where people are poor and cannot pay for hunting licenses. The objective is to provide a viable alternative to poaching,” he said.

A further unusual initiative for the Caucasus Nature Fund is to consider the creation of trans-border parks similar to Africa’s international peace parks. Given that Azerbaijan and Armenia are on a war footing, the only regular form of effective collaboration so far is scientific. Nevertheless, similar efforts worked in the Mediterranean through the Geneva office of the United Nations Environment Programme, getting Israelis and Arab nations to cooperate in preserving marine life and controlling development of the coastal environment. In the Caucasus, too, the long-term vision seeks close involvement of all three countries with a shared history that dates back to the Romans and Mongols, the Ottoman Turks and the Soviets. Although the region may be split by different religions, separate cultures and distinct ethnicities, all three countries are now taking the first steps towards adopting a genuine joint approach to preserving their unique eco-system.