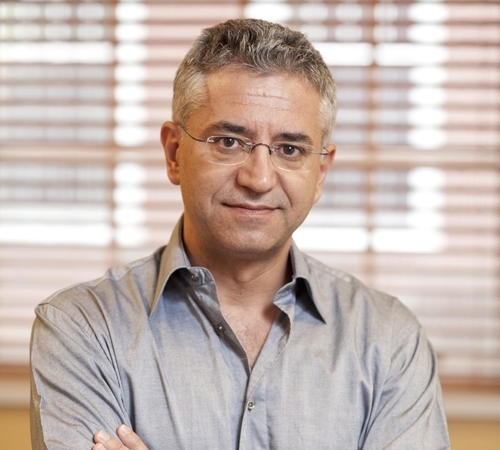 Global Geneva is initiating a new component focusing on creative writing. The following is an excerpt from the short story ‘American Lottery’ by award-winning author Gazmend M. Kapllani. This was published in the June-September 2018 Summer print & e-edition of the magazine.

The American Embassy showed itself to us in the form of a huge yellow building with a huge American flag waving on the top. Three times we were interviewed by three different gentlemen. Their eyes examined us the way that doctors look at patients who are struck by some terminal disease. During the examinations they were assisted by the same translator, a short Albanian man around fifty, with small ears like dried Turkish figs and scarce hair on his head.

Outside the Embassy there was a huge line of people with thin bodies, wrinkled faces and eyes that looked like cracked porcelain cups, waiting to hear their names and cross the fateful gate of the Embassy. Next to the gate stood a few Albanian policemen who kept the long line absolutely even and straight. Their blue and red hats were, for some inexplicable reason, always bigger than their heads. Every time we exited the Embassy, after being interviewed, some of the people would leave the line and ask us questions like: “did the Americans ask difficult questions?” “did the Americans ask if you have a bank account?”.  Usually my father would answer the questions in a military style, with short, sharp sentences.

Three months after the three interviews the mailman brought us another white envelope. Mother took it in her hands and opened it with the tense and attentive gestures of a bomb expert. My father and I hung on her every word. She read it and she smiled like someone who had survived a death sentence. After a month, she announced, two gentlemen from the American Embassy would pay us a visit. This was our last test on our way to America.

The first wave of joy past, my parents gathered in a corner of the sitting room, in a safe distance from me, trying to decode the meaning of the upcoming visit, whether there was something insidious behind it. The devil lies in the details, my mother said. The conclusion was drawn though that the visit meant something particularly good. It meant that only the width of a hair now separated us from America. The visit of the two unknown gentleman incarnated the very width of the hair.

My mother was convinced that the two gentlemen were coming to us in order to gather evidence that we deserved to live in America, that is, that we were living in Albania according to “civilized patterns”. My father felt somehow vexed for the fact that our civilized way of life was put into question. My mother though saw the whole thing in  mathematical terms. She was convinced that this was the last equation to solve and our last test to pass. America, she declared triumphantly, was now in our hands. She raised her right hand and clenched its fingers like she wanted to imprison the dream of America in her fist.

The next day my mother’s enthusiasm shifted suddenly to panic. She looked around the house and felt that it was stripped of objects and symbols that would make us sympathetic to the eyes of our unknown American examiners. “If we don’t prepare properly for the visit we will fail America” she said. A whole day, from dawn to dusk, my parents discussed, argued, agreed, disagreed and agreed again on some basic steps to take in order to win the hearts andn minds of our American examiners.

My uncle would serve as our unofficial adviser in this supreme endeavour.

– “You should have a puppy. It’s the first indicator of a civilized life” – my uncle told my father.

– “We had never had a puppy” – my father answered.

My mother found the idea of the puppy plausible. In any case it won’t harm our positive outlook, she said. Without wasting time, my parents launched themselves in the search of a puppy.

Stray dogs were all over the place in our small town. Dirty and hungry they wandered around the rusty and overwhelmed trash bins, wagging their long tails, fiercely fighting against each other in the middle of the day or doggedly making love in the dead of night. They seemed seriously irritated by the sudden multiplication of private cars in the narrow and bumpy streets of our town. Private cars were not allowed during communism and after its fall they were popping up like mushrooms after the rain.

We didn’t need a dog like those stray uncivilized dogs. What we needed was a dog of special breed, clean, beautiful and civilized. My parents started visiting friendly and not so friendly houses and at the end of their one-week search they looked themselves like defeated stray dogs in the middle of the cold winter. No dog that would match my uncle’s description was to be found in our town.

Luck though had decided to be on our side again. The next morning my mother was woken up by a phone call. Someone on the other side of the line told her that a dog fulfilling every inch of my parents’ requirements was finally found. After a couple of hours the specific dog was brought on a leash to our house by a middle-aged lady whose big sunglasses made her look like a gigantic wasp. The dog was an all white poodle, small, smart, nervous, oval eyes, long ears, round head. A spark of enthusiasm ignited my parents eyes and hearts. Soon afterwards a shadow of terror covered their faces when they learned the name of the dog: Stalin. The dog did belong to an old inveterate communist who had passed away a few days ago. He had named the dog Stalin in honour of his beautiful days spent in Moscow during the period Stalin was dying and he was falling in love with a beautiful Russian woman whom he married afterwards. My parents stood silent looking at the dog as though they were looking at the ghost of Stalin himself.

Suddenly the woman with the wasp-like face said: “In order to solve the problem successfully you could rename it Stallone.” The idea struck my parents’ brain like a thunderbolt. From Stalin to Stallone was a relatively easy transition, they said. The dog would adjust to his new name very soon. Why shouldn’t he? It seemed like a smart dog.

They bargained the price with the lady (I never found out how much the dog did cost us) and took the dog. Stallone-ex-Stalin entered our lives with grace and a lot of peeing that caught our family unprepared, therefore causing a new wave of panic in the house. The next few days were spent mainly learning how to tame the shitty world of a dog. At the end, Stallone-ex-Stalin generously rewarded our efforts. Furthermore, he seemed to appreciate my parents’ efforts to make him feel at home and revealed an impressive inclination to collaboration. He gladly and quickly forgot his former name, “Stalin”, and embraced his new name “Stallone”, never showing signs of nostalgia or identity crises.

The moment that Stallone-ex-Stalin entered our lives I started dating Beti. We were in the same class in high school, both fifteen and both thirsty for those half-unconscious games of gender-roles. We always sat on the last school bench and often exchanged glances without saying anything. Every time I looked in her eyes I felt my heart transformed in a cascade. I liked how she squinted, how she touched her nose, how she moved her hands. I liked her legs. She always wore straight jeans that her father had sent her from Italy where he had immigrated two years ago.

We would meet after class and walk to the “Tobacco Warehouse” – a deserted place with no tobacco and no warehouse on the outskirts of our town. Only the town’s cemetery was there. We sat on a broken bench under a solitary cypress tree in front of the cemetery and smoked cigarettes in silence. “Marlboro Lights”. Only here we could feel safe to smoke, away from the eyes of the grownups.

While smoking we would talk about her father in Italy, her quarrelsome mother, my anxious parents, our new dog, my mother’s pies and the upcoming visit of the two unknown gentlemen from the American Embassy. “America. America” – she would repeat almost absent- mindedly, sucking her cigarette with grace, like she was trying to recall the name of a forgotten place or repeating some magic formula.

I liked how her lips pronounced “America”, I liked how her lips sucked the cigarette, I liked how her lips emanated small plumes of smoke that seemed like the fog of fairy-tales. Neither of us had ever traveled abroad. She liked Madonna and Cyndi Lauper. I liked Robert De Niro in “Once Upon A Time In America”. Klodi would say that she wanted to become an actress one day. Then she hoped her father would take her and her mother to Italy soon. “I would like to travel all over the world until I get very old” she would say. She always kept a map with her in her backpack and after smoking two cigarettes she would pull it out and we both would plan imaginary trips, a bit of everywhere. Bent over the map I felt her black hair touching my face and I struggled hard to hide my enchantment and agitation.

“If you were free to live in another country which one would you have chosen?” – she would ask me. “Italy”, I would say. “But you’re going to live in America”, she said staring at me with her sober eyes. I would shrug my shoulders. My parents had never asked me whether I liked going to America. Everyone wanted to go to America. But I was not mad about it. I liked Italy better. It was a matter of language, perhaps. Italian sounded like a beautiful melody.

English sounded like cracking nuts. She would listen to me in silence and would say: “you’re going to fall in love with English one day, you’ll see”. Then we would walk back to town, keep a safe distance from each other, chew mint gum to delete the smell of tobacco, say goodbye and go home. I watched her in secret while she walked away and I felt a kind of simultaneous ebb and tide in my chest. 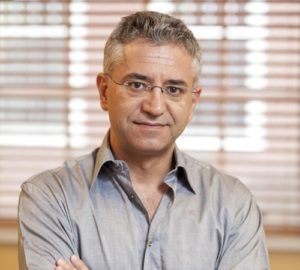 Gazmend M. Kapllani is an Albanian-born polyglot author, journalist, and scholar. He lived in Athens for over twenty years. He received his PhD in political science and history from Panteion University in Athens, with a dissertation on the image of Albanians in the Greek press and of Greeks in the Albanian press. Kapllani’s first novel “A Short Border Handbook” (Livanis, Greece 2006) has been translated into several languages. It has been adapted for the stage by Bornholm Theater in Denmark and The National Theater of the Deaf in Greece. In 2017 it won the prestigious International Literary Prize of the City of Cassino in Italy. 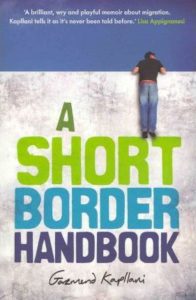 Kapllani’s two other novels, “My Name is Europe” and “The Last Page” have been translated into French; “The Last Page” was short-listed for The Cezam Prix Litteraire Inter CE 2016. Since 2012 he has been living in the United States as a Fellow of the Radcliffe Institute for Advanced Study at Harvard University and writer-in-residence at Brown University and Wellesley College. Also a columnist and advocate for human rights, fairness, and diversity, Kapllani currently resides in Boston teaching Creative Writing and European History at Emerson College. His new novel “Wrongland” is the story of two brothers, Karl and Frederik, raised in Cold-War Albania, under an authoritarian communist father (who named his sons after Karl Marx and Friedrich Engels) and a violent Stalinist regime that had isolated the country from the outside world.