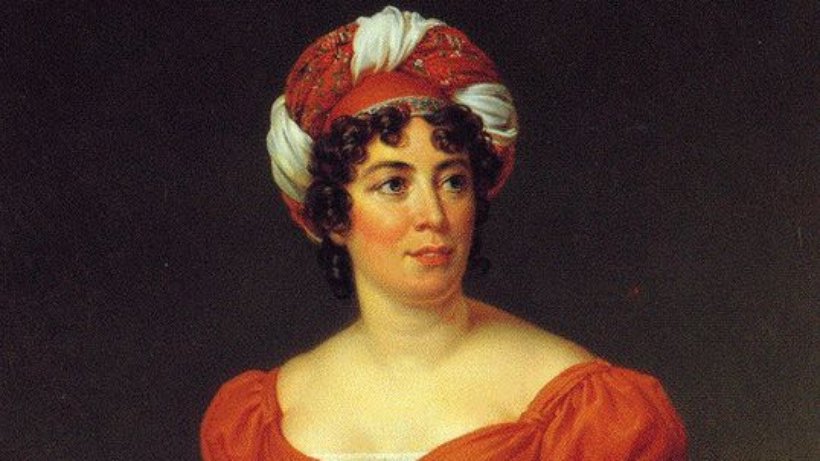 Her private life, scandalous at the time for its number of affairs with younger men, meant that more attention was given to the gossip than the ideals. She is often contrasted with Jane Austen, whose fame has only grown with time.

In fact, the Austen family sedulously built up a picture of a shy and retiring novelist. It’s reported Janet Austen was invited to a party Mme de Staël was due to attend but “immediately declined,” according to Austen’s brother. The story may be apocryphal. Similarly, de Staël is said to have described Austen’s novels as “vulgaire”.

Catrina Seth, Marshal Foch Professor of French Literature at the University of Oxford, likes them both. “Yes, [Jane Austen, who died four days after Germaine in 1817] is a great writer,” she says, “but so too is Staël.”

The writer Richard Holmes agreed de Staël was “one of the richest and cleverest young women of her generation in Europe”. She personally saved at least a dozen people from the guillotine during the French Revolution. It was said that Napoleon recognized three powers in Europe: England, Russia and Mme de Staël.

Her formidable energy and focus made her at least the Hillary Clinton of her age. A British doctor marvelled that Germaine would use the time her hair was being prepared in the morning to eat her breakfast.

She was an intellectual from the age of 14 in her mother’s Paris drawing room, ignoring the convention of women leaving the table to men and their cigars after dinner. She became famous for wearing a flamboyant turban and scarlet gown. Her lover and collaborator Benjamin Constant opined: “If she knew how to rule herself, she could rule the world”. In this, she was surely the opposite of Mrs Clinton, whose self-control astounds as much as her intelligence.

Nevertheless, Mme de Staël nearly did rule the European intellectual world of the time. “Germaine de Staël was crucial in putting together the coalition that brought down Napoleon,” Geraldine Bedell reminds us, reviewing the first biography of de Staël to be published in 50 years. “She pretty much invented comparative literature, thought up the term ‘romanticism’ and was an early celebrity: someone about whom everyone had a view. Byron said she was as ‘frightful as a precipice’.”

The Chateau de Coppet, a family mansion 100 metres from the local railway station, became the hub of her intellectual power. She gathered around her what became known later as the Group of Coppet, though I own a 140-page book debating whether the group actually existed.

What is known is that between 1894 and 1815, Coppet under Mme de Staël opened its doors to refugee intellectuals who had become undesirable in Paris, to German Romantic philosophers and writers, and to poets like Byron. Napoleon said the mansion became “a veritable arsenal against me” and Stendhal described Coppet as “the general headquarters (Etats-généraux) of European thought”. She met the elite of society when she travelled to Germany and England.

When young Germaine saw how much her parents enjoyed the company of the British historian Edward Gibbon, she offered to marry him so they would never be deprived of his conversation. Her lover, the Count de Narbonne, was father of two of her sons. She and Constant also had a daughter together. She married Albert de Rocca, a Swiss officer 23 years her junior, when she was 45. They had one son. 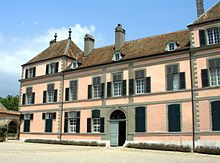 For the 200th anniversary of her death, the chateau and partner organizations turned a French bullet train (TGV) into “a theatre on rails”, immersing passengers in the environment of the period and linking Paris to Coppet “for the first and only time” on 13 July.

For the travellers, this was followed next day by a play starring Brigitte Fossey and Alain Carré on Mme de Staël and Napoleon, depicting a time when she thought the Corsican a genius like her father. The famous Genevan lawyer Marc Bonnant and the writer of the original play, Hippolyte Wouters, also appeared in the production. In mid-July, the chateau presented extracts from Mme de Staël’s plays, music by mainly Italian composers of 1750-1817 (she was an enthusiast for things Italian) and other events in “a harmony of theatre, music, circus, dance, pyrotechnic effects, sound and lights”.

After several months as an invalid, Anne Louise Germaine de Staël-Holstein died of a cerebral haemorrhage in Paris on Bastille Day 1817, aged 51. She was buried with her family in Coppet. She can be credited with influencing the whole Romantic movement from Scott to Shelley.

Many great writers have been kinder to de Staël than the critics, including Pushkin, Tolstoy and Ralph Waldo Emerson. She appears in Auguste Comte’s Calendar of Great Men.

In our time, a character in The Sopranos television drama quotes her advice: “In life one must choose between boredom and suffering”. A Republican critic of American Vice President Dick Cheney echoed her when he said of President Bush’s scandal-wracked administration: “Men do not change, they unmask themselves”.

This is not the end of the story. In the bicentenary year, special show-tours of the Coppet mansion took place on the 14th of each month at 6:30 PM from 1 April to 31 October (tickets: 15CHF. Booking mandatory: visites@chateaudecoppet.ch). In June, UNESCO held a one-day conference in Paris, entitled ‘Madame de Staël: a woman of our times’ ,drawing former Swiss President Pascal Couchepin as well as Jacques Berchtold, head of the Martin Bodmer Foundation.

“The only private Vaudois castle that is still inhabited”, since 1784 the Coppet mansion has been in the hands of the direct descendants of Jacques Necker, Finance Minister to Louis XVI, and Madame de Staël’s father. It receives no official grants but several of the rooms are available for rent as banqueting and reception rooms, and a bequest helps pay expenses.

Open to the public from spring until autumn, the mansion closes in winter to preserve its collections, and organizes a Garden Festival each May on the grounds (see the Nyon Television report. The Bodmer Foundation in Cologny, with its superb collection of books, ran an exhibition on Benjamin Constant and Mme de Staël until 1 October (Tuesday to Sunday afternoons). It includes a number of specialist lectures. France Culture radio station also put on a series of programmes entitled “Being right with Mme de Staël”.

Contributing editor Peter Hulm lives in Switzerland. This article was updated to reflect the end of the celebrations.