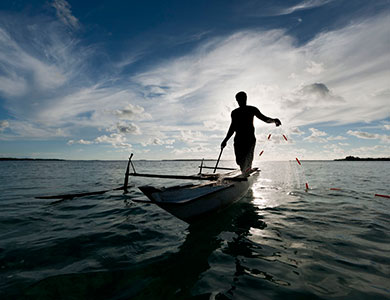 Tear Drop in the Sea – By Gardner Young (a diver)

I tell you mate, we all tempt fate when we dive beneath the sea

For a man’s a fool, to break the rule, that nature meant to be

Yet still I go, deep below where I know I don’t belong

A’ there I hear, loud and clear, the oceans dying song

Those swarms of fish just don’t exist, they get smaller every day

The ocean blue, has lost its hue, and turned a dismal grey

Those golden walls, live corals all, have lost their primal glow

And so I cry, for days gone by, and the sea I used to know

So who’s to blame, for this crying shame, of ocean homicide

It’s just us men, who daily send, our garbage with the tide

My love for the ocean dates back to my early teens when my parents, having already decided that I was at least semi-aquatic, decided to move to the Bahamas — so that I could become totally aquatic. I would later discover that their motives were more fiscally based, but I have thanked them every day of my life for their choice.

It was 1954 and I had just purchased my first aqua-lung. We had no idea that diving involved complex physics, but the tank came with a small fold-out booklet offering a few critical warnings, such as not holding one’s breath on ascent. What kept us from a serious diving accident was that the tank only contained enough air to allow dives that didn’t incur the time/depth penalty leading to a decompression accident.

Naturally, if we could have afforded it, we would have had more than one tank, or an air compressor, but then we would have killed ourselves through repetitive dives. What we did learn, however, was that diving was not the irresponsible game we had embarked upon. We very soon set out to learn all we could not only about diving but of the ocean, its inhabitants and its magnificent constructs. This process has never ceased.

Today, well over 60 years later, my life has always focused on an ocean horizon. I have made television features and worked for 25 years on the French nature series, Ushuaia. During this time, I have had the privilege of meeting, working with and listening to some of the finest scientists in the world. It is their enthusiasm, their knowledge and their words that have guided me.

The oceans can supply almost anything we need

The deep ocean pioneer explorer Dr Robert Ballard, most famous for his discovery of the Hydro-Thermal Vents and the Titanic, is one whose ideas about mankind’s future in the ocean are prescient.  The United States, he said, has two exploration programmes. One is NASA, with a mission to explore the great beyond, the other is NOAA, the National Oceanic and Atmospheric Administration, with a mandate to explore the oceans. NASA’s annual budget alone would fund NOAA for 1,600 years! Why are we primarily only looking up, he asks? “Is it because it’s heaven? And hell is down here? Is it a cultural issue? Why are people afraid of the ocean? Or do they just assume the ocean is just a dark, gloomy place that has nothing to offer?”

He went on to talk about the potential of the oceans to supply almost everything that we need. “You know, it’s just ludicrous, we are constantly playing the zero-sum game.  We’re going to do this, we’re going to take it away from something else. I believe in just enriching the economy, but we’re leaving so much on the table.” Fifty per cent of the United States consists of legal jurisdiction of what lies beneath the sea. Nevertheless, he adds, “we have better maps of Mars.”

The Easter Bunny has put things on the ocean floor

And on a global scale Ballard is unequivocal.  As he points out, the mid-ocean ridge runs around the planet like the stitching on a baseball — 42,000 miles (67,592 km) in length — and covers 23 per cent of the earth’s total surface area. Almost a quarter of our planet is a single mountain range. It was only after Neil Armstrong and Buzz Aldrin went to the moon that scientists began exploring it. Along this ridge are tens of thousands of active volcanoes – more than on land by two orders of magnitude. Each of these, he added, spews out commercial grades and quantities of copper, lead, silver, zinc and gold. “So the Easter Bunny has put things in the ocean floor, and you have massive heavy metal deposits that are being made continually in this mountain range,” Ballard maintains.

My own experience in the Bahamas and filming all over the world has shown me that the thousands of square miles of shallow banks and similar regions could become the platform for large areas of human habitation. They could also provide the core geography for truly viable fish farms and fish ranching, seaweed production; virtually all of our needs. The oceans, which cover 72 per cent of our planet, are capable of providing a continually renewable food, raw material and energy source.  Living, both in and on the sea, is a practical solution. Given its enormous biological wealth, most of which has yet to be discovered, it is inevitable that people must turn towards the deep oceans.

But how do we go about making the ocean as psychologically acceptable as Mars?

There is no question about the economics. Exploring, developing and otherwise exploiting the oceans is massively cheaper than doing the same in outer space. Documentary films, photography and books are a prime means. The first person to give us not only photographs of the living marine world in 1938, but also laid the foundation on which today’s scuba diving and free diving activities are built, was an Austrian, Professor Hans Hass (1919-2013). His achievements were both exceptional  and huge. An advanced Google search for ‘Hans Hass’ provided 145,000 results in 0.21 seconds.

Hans, together with his wife Lotte, continued throughout their lives to help mankind understand the oceans. As far as Hans was concerned, the future of human life on this planet is inexorably linked to the sea. I joined an extraordinary, inspirational friend of Hans — Leslie Leaney, a diving historian and editor of the Journal of Diving History — when the Hans Hass Award was created in 2002 to honour those seeking to bring this understanding forward. I chair the Awards Committee and Leslie is Executive Director.

So far, this prize has recognized an array of scientists, film-makers and deep ocean engineers, such as Sylvia Earle, Laurent Ballesta, James Cameron and Cui Weicheng, who have raised the bar of understanding.  The Blancpain Watch Company joined this commitment in 2013. It is now known as the Hans Hass Fifty Fathoms Award, recognizing Blancpain’s Fifty-Fathoms watch, the world’s first dedicated diving watch.

As global interest in the oceans grows, the plan is to expand recognition for other crucial disciplines, particularly the arts, as more people become involved in what is humanity’s greatest challenge. Our mission now is to get young people involved and passionate about the oceans. As a career path. Or any aspect of it – whether it is biological, mechanical. Whether it’s through art, even music! To take advantage of all the opportunities. We have programmes to colonize the moon and Mars, but not our own planet. Not unlike the galactic initiatives of today and tomorrow, our ocean technology is already available today.

Underwater film-maker and writer, pilot and diver, Krov Menuhin is chairman of the Hans Hass Award and lives in Nassau, Bahamas. A former US Army Green Beret, he helped set up the Special Forces Combat Divers School while also indulging in high altitude parachuting from 30,000 feet before dedicating himself full-time to ocean exploration and filming.  Krov’s 40 years of film work has earned numerous international awards and he has served twice on the jury of the Rolex Awards for the Spirit of Enterprise. He is a Founding Benefactor of the Historical Diving Society and a Fellow of the Royal Geographic Society.

‘Challenging The Deep’. By Hans Hass

“As long ago as 1942 I stressed in an article entitled ‘ Colonization of the Sea’ how important the exploitation of the oceans was to man, and what vast quantities of food, raw materials and so on, were still available to us in the ocean depths. Many of these arguments were challenged at the time; today they are no longer utopian. The conquest of the sea is certainly of greater practical importance than that of the planets around us. But this conquest will surely not be along the line of some human dolphin or some human sea lion evolving. Instead we shall extend our body, a body designed for terrestrial life, by means of technological advances; we shall then be able to raise the wealth of the oceans without getting any wetter than is necessary or pleasant.”