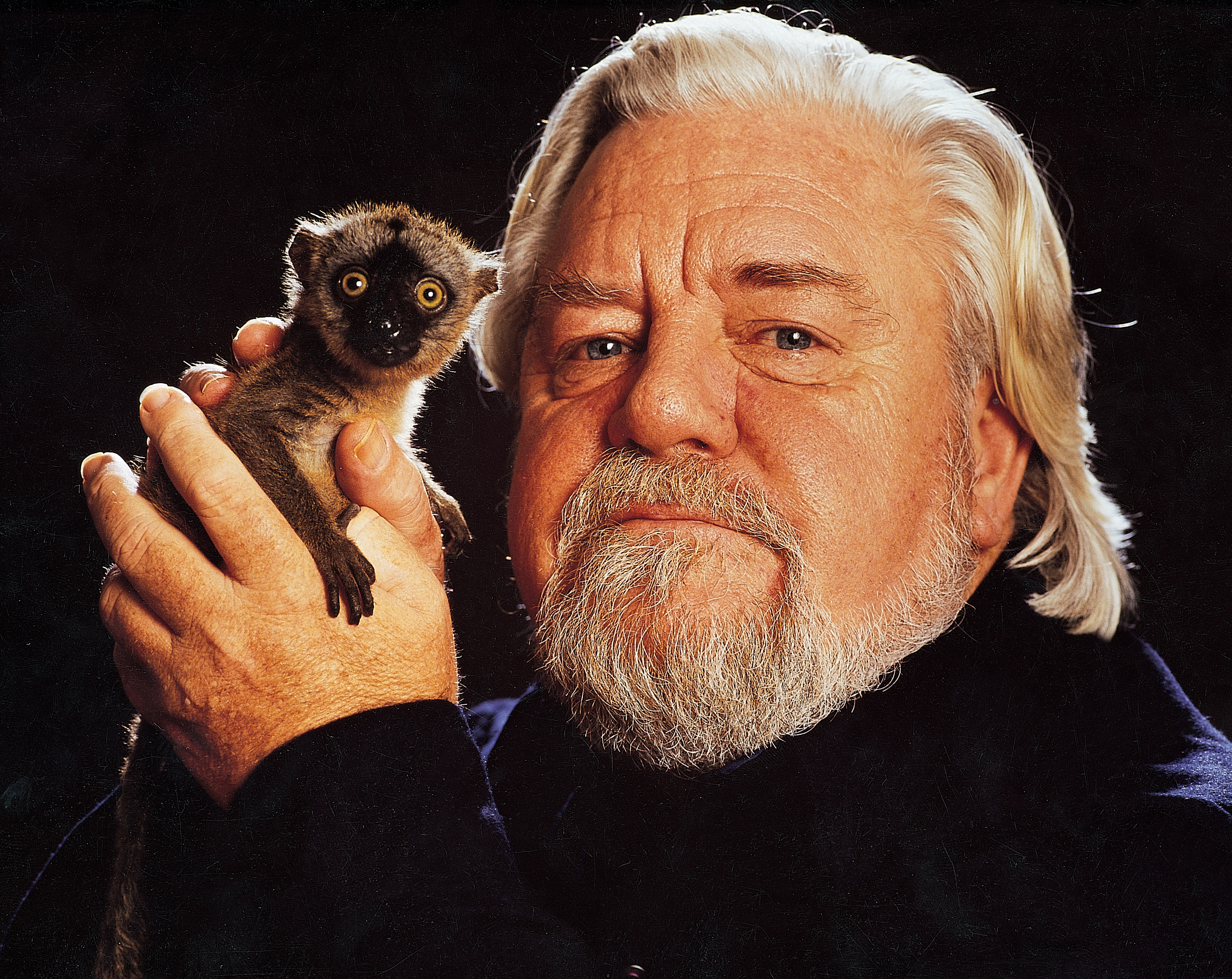 This article also has been published in the Oct/Nov 2017 print and e-edition of Global Geneva magazine.

Children hate going to bed.  They always want to stay up for just another few minutes, and a few more.  But on dark winter nights in wet, cold, gloomy Acton in the early 1960s, there was nothing I wanted to do more than get to bed and have one of my parents read to me from Gerald Durrell’s books of his adventures with animals, his collecting expeditions to West Africa and South America and the story of the formation of his zoo in Jersey which I’d visited as a five-year old.

With Durrell, as with David Attenborough and other naturalists or zoo keepers like Graham Dangerfield and Desmond Morris, I could put a face and a powerful presence to the words because of their television programmes. Just as I drank in the words read out from his books, I was an avid consumer of their programmes on natural history.  They were huge influences on my early years and I developed a love of and fascination with animals.  They nurtured a desire not just to see animals in zoos – and I was a zoo lover, however questionable that may appear today when ideas about zoos have changed dramatically – but to go to Africa or Guyana or even just the New Forest in England to see animals in the wild.

Their programmes, along with Anglia TV’s Survival, introduced me to the magical Ngorongoro Crater in Tanzania, and it was camping down in the Crater in 1986 that my pregnant wife and I felt the first kicks from my son Tom. Six years later, as I prepared to go on a programme-making trip to Guyana for the BBC World Service, I recorded chapters from Gerald Durrell’s My Family and Other Animals  and The Bafut Beagles for Tom to listen to before going to bed. He, too, loved books and stories and particularly Durrell’s and my funny attempts to do some of the voices.

The study of animal behaviour: a useful asset for observing feral politicians?

With this background, it was with a sense of nostalgia that when I was teaching in the School of Politics and International Relations at the University of Kent I used to pass the sign for the Durrell Institute of Conservation and Ecology (DICE). When I was studying back in the mid-1970s I very nearly swapped from Politics and International Studies to Animal Psychology, which would have taken me down a different path to the one I chose in political journalism and academia – though the study of animal behaviour might well have proved just as useful when observing feral politicians.

But in September 2016 to my great delight I was invited to give a guest lecture at the Durrell Institute and in January this year was made a member of the Institute.  This was because my early Durrell and Attenborough-instilled fascination with wildlife has never left me.  In 36 years of making radio programmes in eastern and southern Africa and writing books on conflict in Africa, I’ve always used programme-making or research trips to seek out and watch wildlife, and talk to those most closely involved in its conservation and study.

As head of World Service news and current affairs documentaries in 1993, I sent myself off to Botswana to look at the country’s conservation policies and the perennial, controversial question of whether or not to trade in ivory; whether such a trade helped conserve or conversely encouraged the poaching of elephants. The ivory issue became a major interest and over more than two decades I assiduously collected material, kept interview transcripts and recordings,  and researched the issues, leading to the publication in November 2016 of my book,  Ivory.Power and Poaching in Africa.  It was this book and series of shorter pieces on both the ivory and the rhino horn debates that led to me being made a member of DICE – something of which I am inordinately pleased and proud, not just because of the international reputation and scholarship of the Institute but because of the connection with one of the towering figures of conservation and the popularisation of wildlife issues in the last half of the 20th century.

Conservation, training and research – Durrell’s view of the role of the modern zoo

Gerald Durrell was a big presence in every sense of the word.  He tirelessly promoted the cause of species and habitat conservation.  But not for him the sexy, obvious, charismatic megafauna, but instead less well-known creatures that few who didn’t live beside them or study them were aware of, but which are each equally fascinating and valuable in ecological terms.  His books entranced readers across the world – as they had me and my son – and his TV programmes on wildlife and the dramatisations of the chaotic, colourful but charismatic accounts of the Durrell family fauna and their Grecian habitat have entertained millions of viewers.

Lee Durrell, the distinguished conservationist, Honorary Director Durrell Wildlife Conservation Trust and Gerald Durrell’s widow, told me his legacy was multi-dimensional. Through his writing, which she believed helped people appreciate “the fundamental connection between people and animals” and encouraged his readers to “re-connect with wildlife and nature”, his founding in 1959 of his zoo which has become a wildlife conservation trust and, as Lee Durrell put it, the creation there of a “mini-university” for training people from across the world – 4,100 individuals from 137 countries have participated in Durrell courses and workshops on conservation and wildlife research.

The BBC’s towering founding Director-General, Lord Reith, once characterised the mission of the corporation as being to inform, educate and entertain. Gerald Durrell could be said to have been a one-man conservation corporation who informed, educated and entertained but then did a lot more. He was instrumental in saving endangered species and he worked to change zoos into tools for conservation, scientific research and education, so they were not just collections of cramped cages full of sad animals.

Lee Durrell says he saw zoos as having a far more important task even than education, that they had far more roles to play – as breeding centres for critically endangered species, as training centres for conservationists and as scientific research institutions. Durrell, she said, believed strongly that zoos should have the active conservation role he developed at Jersey Zoo (now the Durrell Wildlife Conservation Trust), and should have a strong scientific research component so that animals in captivity could be studied in ways it was often impossible to study them in the field and that this research was vital to get the information necessary to ensure they survived in the wild.

Gerald Durrell, Lee Durrell and the Trust have played important roles in breeding and reintroducing into the wild species like the Assamese pygmy hog (85 of which have been successfully bred and released back into the wild), the mountain chicken frog of the eastern Caribbean, the Madagascar pochard, the Round island boa, to name but a few. The Trust works across the world with local organisations and communities to further the cause of conservation, importantly, to involve and empower local people.

Criticism of zoos and their methods

When, in the 1980s, there was mounting criticism of zoos and their methods, while Durrell felt that many zoos were appalling and should be closed down, he was distressed by the broad-brush attacks on all zoos and the lack of recognition of the role that good zoos could play. Groups like Zoo Check, founded by the actress Virginia McKenna of Born Free fame, was vigorous in its anti-zoo campaigning, though it is noticeable that Jersey Zoo was never singled out for criticism by Zoo Check or its successor the Born Free Foundation. Lee Durrell told me that while the zoos that kept animals in terrible conditions should be closed, there should also be recognition of the major contributions of zoos that had a positive impact through the sort of work that her husband had pioneered.

Another area of controversy that his wife believes hurt Durrell was criticism of his representation of Africans, notably the Fon of Bafut (one of the larger than life characters in  The Bafut Beagles).  Durrell’s biographer, Douglas Botting (See note below), wrote that Durrell was upset by the British government officials in Cameroon suggesting that he had presented the Fon as a “black clown” and in ways that would, in modern jargon, be called politically incorrect. You can still see on various websites, including Wikipedia,  criticism of him as a closet colonialist or even racist.

Unfair – and silly – attacks against Durrell

Both Botting and Lee Durrell think these accusations don’t bear close scrutiny as not only did the Fon himself have no problem with his depiction (far from it according to Botting) but Durrell’s whole history of work with peoples across the globe and the internationalist nature of his work speak against this.  As a journalist who has spent most of his career concerned with and reporting on Africa, I find the criticisms both silly but also ahistorical as much of the language criticised is language he used to lampoon himself, his family and friends but was also very much the language of its time and of his peers.

From reading his books, his biography and, most importantly, having had the chance to talk at length about him with his wife, Gerald Durrell comes across as a complex and multi-faceted man who was of his time but moved ahead of his time in his approach to zoos, conservation and man’s link with the animal world – not to mention his value as a writer on wildlife and story-teller. For these reasons and because of the pleasure his books gave me and my family, my connection with Durrell through DICE is something to be proud of and to live up to.

Professor Keith Somerville is a member of the Durrell Institute of Conservation and Ecology at the University of Kent, teaches journalism at the Centre for Journalism there and is author of Ivory:Power and Poaching in Africa and Africa’s Long Road Since Independence.  He is now working on a history of human-lion coexistence and conflict from early man to the present. Previous articles by Keith Somerville in Global Geneva include: Is legal trade the only way to save Africa’s remaining rhinos and Keeping it in the family: How Africa’s corrupt leaders remain in power.

[2] BBC Series, My Family and Other Animals http://www.imdb.com/title/tt0166450/ ; The Durrells https://www.durrell.org/wildlife/the-durrells/