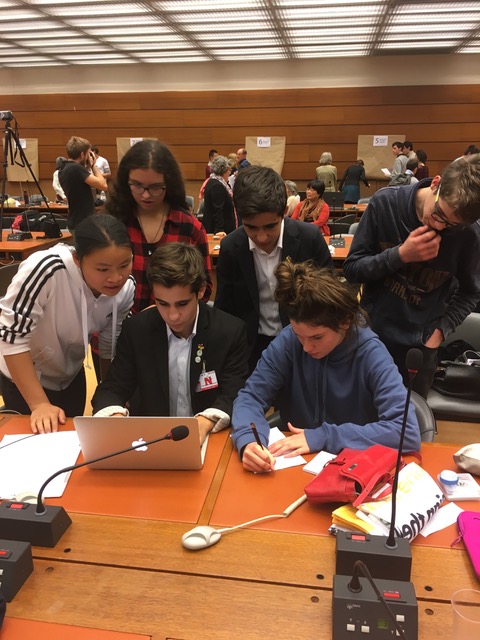 “The “chair” is missing a leg…if we lived in peace and in harmony with Nature, the leg would still be there and provide true stability and sustainability.” (Dr. Michèle Perrin-Taillat, an advocate of the Cochambaba Declaration of Rights of Mother Earth)

The initiative would acknowledge Nature as a living system, deserving inherent rights and protection just like humans. In western law, Nature is treated as a commodity and has no standing in court. This oversight in the law is at the core of the depletion and destruction endured by Nature.

As a group, we marched down from the main entrance of the UN to the Place des Nations, which has become customary gathering space for people seeking to express themselves to the world. We followed the narrow pavement that runs alongside the Palais to the Place forming a single identity: thinking like one person.

At first, while holding our #EarthToo signs made from recycled cardboard signaling what the movement is about, we felt somewhat embarrassed by the magnet-like attention we drew. People were staring as if we were delusional. The heavy rain and cold did not help either. But since we are in Switzerland, such weather is an everyday thing. It wasn’t easy but the cause was worth every minute that we spent outside in the cold. 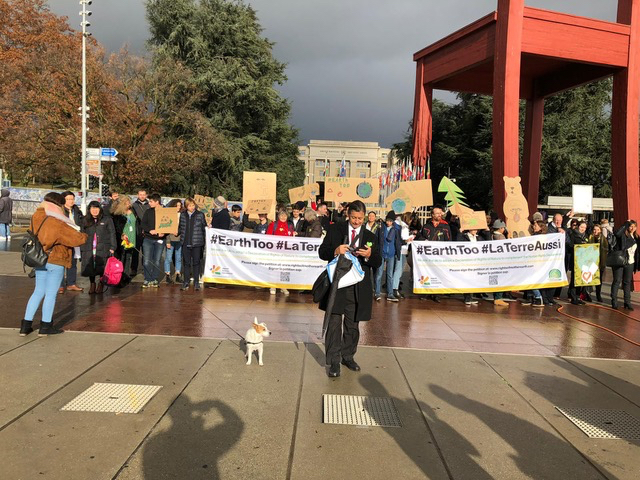 While marching, it occurred to us that our generation takes human rights for granted. We then thought that it’s our turn now to fight for rights of nature just like the previous generations did for human rights. Hopefully, in a few years, respecting nature will be just as normal as respecting humans. We also started thinking that today you can no longer legally buy a human being as happened during the time of slavery. That means that the fact we can today still buy and sell parts of nature may in time become history. It will be considered unthinkable.

Our march may represent only the first one for a Declaration of Rights of Nature. But there will be more. Because this has become the fight of our generation.

You can make a difference by joining our march next year and by signing the Global petition at: http://care2.com/motherearth

This article was co-written by youth authors: Auxane Bouvry, Sarah Peter, Nathan Tardy, Theo Abramo and Nourelise Dielidi. They were participating at the 10th OSI Geneva Forum 2018. The Global Signature Campaign for a Declaration of Rights of Nature is a civil society movement. Both organizations work in support of the UN’s Harmony with Nature Program and the Sustainable Development Goals (SDGs).

The campaign also has been working with Care2, a network of nearly 50 million people around the globe, dedicated to building a better world.