THE BEST WAY I KNOW OF TAKING IT ALL IN is to get on a bike and hit the greenways, known in the francophone part of the country as les voies vertes. They are also known in parts of Europe as veloroutes.

The idea was hatched when planners wanted to find a way of putting defunct railway lines back into use. The idea was to turn them into paths that are dedicated to cyclists and pedestrians, without the nuisance or danger presented by automobiles.

The first voie verte was completed in Burgundy in the 1980s and runs from Macon in the south through Chalon-sur-Saône and northward. In the intervening years, hundreds of kilometres of veloroutes have been added across continental Europe and are easily accessible if you know where to look. In fact, one in particular, part of the Eurovelo system, goes through the Swiss Jura and continues all the way to the Danube.

Most parts of Switzerland have greenways, usually well-marked, but there are still parts which have been only partially developed, such as the bike routes along and above Lake Geneva. Many communes, such as in and around Basel or the Chateau d’Oex-Gstaad-Zweisimmen area are now incorporating bike lanes with separate pistes rather than simply painting corridors along main roads. The same goes for the Valais, Graubünden and Ticino, where bike routes meander through fruit orchards and vineyards or along rivers.

The key to the real voies vertes is that they adhere to strict requirements that ensure that cyclists of all calibres can safely enjoy them. For example, to qualify as part of the official route, they have to be a minimum of three metres wide so cyclists can ride abreast and oncoming cyclists can pass without crowding.

There is also a limit to how steep a grade can be, with the average along a given length not to exceed 3 per cent. Given that they are usually built on old railway lines, most of them are pretty flat. The more travelled routes are paved, although this isn’t necessarily the rule. Sometimes you’ll find packed gravel instead, but even these are generally well maintained and make for comfortable riding. When the route traverses a road, they are required to have barriers and signage to indicate that it’s time to slow down or stop, and check the surroundings before proceeding.

But be prepared to share the road with other non-motorized users. You’ll find joggers, parents with strollers, and even the occasional in-line skater taking advantage of the long-distance route. Choosing some of the less popular routes means that you will often find yourself riding for hours seeing virtually no one except the occasional farmer.

You don’t need to be an athlete, and certainly don’t need a wardrobe of Lycra to get started. A good solid road or mountain bike will suffice as long as it’s in good working order. A lamp for your bike is a good idea in case you find yourself losing track of time, as is a good supply of water and snacks. That said, most routes wind through villages and towns, and there’s usually a restaurant waiting to be discovered just around the corner.

Some advice on planning: pack a lightweight backpack with a rainproof shell, sun cream and water, as well as a few snacks, a map and a phone. Be sure to have ID in case you’ll be crossing borders, and don’t forget a sense of humour, which will stand you in good stead in case of anything unexpected. Think about safety, too. Always wear a helmet and invest in a pair of riding gloves to protect your knuckles.

Don’t feel that you need to cycle from end to end. Particularly if you haven’t been on a bike lately or have a young family along, plan a short trip and work your way up. 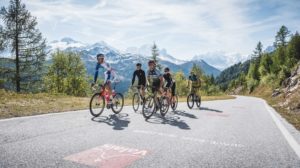 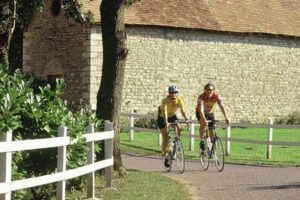 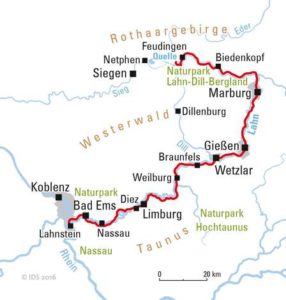 Sample route in Germany. The Lahnthalweg.