Just beyond the vibrant coral reefs on the eastern rim of Palau’s island archipelago, the clear blue of the Western Pacific suddenly becomes even bluer, both on the map and in reality, as it drops off into the Marianas Trench, the deepest part of the world’s oceans that slices 5,973 fathoms (10,924 m) into the core of the earth. On the surface, Palau is just as remote. Draw a line 1,000 km north from New Guinea, and another 1,000 km east from Mindanao in the southern Philippines. Where they intersect is the Republic of Palau, or Belau as the Palauans say – over an area approximately the size of Europe. With a population of about 22,000, barely the size of a market town in Switzerland, it manages to function as a fully independent country and a member of the United Nations. 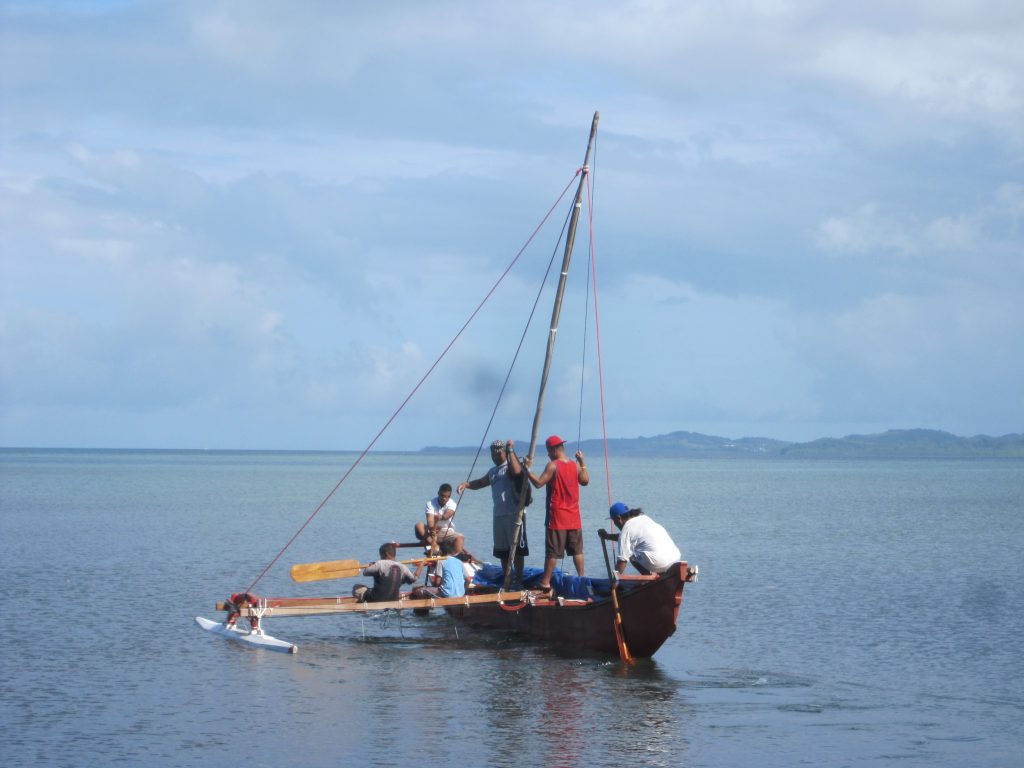 Only five islands are permanently inhabited, plus a handful of islets with tiny populations, including one with a solitary hermit. The Palauans, even adolescents, are incredibly friendly, polite, and helpful. Ordinary crime is so rare that doors are almost never locked – if, indeed, they have locks. It is difficult to believe the statistics showing that violence, even murder, is far from unknown; it almost always occurs within the family or the clan.

Last year was election time in Palau; the big day: November 1, 2016, a week before the US elections. Months beforehand candidates had bloomed like oleander. Those seeking the presidency included the outgoing president, Tommy Remengesau and his vice-president, Sandra Pierantozzi. There are no political parties, only large posters, and stickers. And lots of talk. In the end, Mr. Remengesau was re-elected for another four-year term.

Palau was the last American territory under a United Nations mandate. Full independence came in 1994 after years of wrangling – and repeated referenda – over the formal status that would replace  that of  a UN Trust Territory as it was since the end of the Second World War.  Two decades had elapsed since the US engineered – some would say calved (as in iceberg) – the Federated States of Micronesia. Originally Palau was to be included, but the Palauans, who are separated from their nearest Micronesian neighbour, Yap, by more than 500 km of water, wanted none of it. They have always, at least since anyone started thinking in those terms, considered themselves a cut above their neighbours. They speak a different language and, in their tiny numbers, with a certain degree of homogeneity.

There was another crucial political consideration. Despite strong pressure, the Palauans flatly refused any naval bases on their territory. No Guam. They went one step further by insisting that the “Treaty of Free Association” that defines their relationship with the United States, include a clause forbidding any unilateral military use of their islands, not even “naval visits” by ships carrying or powered by nuclear material.

The Palauans know only too well what happened on Bikini, the Marshall islands’ atoll and neighbour in Pacific-island terms, which was the scene of 23 American nuclear tests between 1946 and 1958. The entire population of Bikini was moved to Rongerik, a nearby atoll that proved to be so resistant to good agriculture or fishing that only emergency aid kept the Bikinians from starving to death. Eventually the United States paid the islanders and their descendants $2 billion in compensation and two generations on, in 2014, declared that Bikini was once again habitable. By then very few of the original Bikinians were alive. And even fewer – or their descendants – wanted to return.

Major political or economic decisions occasion lively discussion, particularly in the Legislative Assembly – the 16-member lower house of Parliament – but by some turn of magic the violence that erupted in the first years of the Republic when two presidents were assassinated, has dissipated. Now there are long palavers aimed at consensus. If the modern institutions of the Republic remain deadlocked, the dispute is referred to the Council of Chiefs, a second, traditional layer, under – or perhaps above – the surface.

The chiefs are all men but the power of the council can only be confirmed by the women who choose them. In the same vein, property is passed from one generation to the next through the women of the family, mothers or maternal uncles. Bilung Gloria Gibbon-Salii, the current queen, preserves the system symbolically by insisting that no one who visits her may go away empty-handed. That applied even to me, a foreigner: I treasure two cowry shells, once used as traditional currency in much of the Pacific. Knowing that their export is strictly controlled, I asked her whether I needed a certificate from the Bureau of Conservation (a child I know calls it Ministry of Shells). “If anyone asks you, just say that they were a gift from me,” she replied.

Historically, few Pacific islands were matriarchies. Palau, under the surface of a miniature republican government copied from the United States, still is. There may be a president, senate, house of delegates, and state governors, but it is Bilung, a matriarchal figure who trumps them all. She doesn’t make much noise; there is very little public ceremony. On Saturday mornings she joins in worship with the congregation of the Seventh Day Adventist church in Koror and on other days you may meet her on the town’s main street going about her business, usually accompanied by a relative or two.

The Palauans, officials or simple citizens, realise that their only real resources lie in the extraordinary natural beauty of their barely developed islands and the richness of the sea. The potash mine that attracted the Germans in the late 19th century was exhausted by the time Berlin’s colonisation gave way to the Japanese. Palau has only 415.6 sq km of land area. Coral reefs and mangroves cover almost five times as much (1,940 sq km). Its vast territorial waters – full of fish – are both a blessing and a problem.

Leases for fishing rights provide an important part of its income, but it is impossible for the tiny Palauan coast guard to patrol and control legal and illegal boats. The Australians and Japanese, the latter, poachers turned gamekeepers, provide some help, but not enough.  Even local fishing is strictly regulated and the regulations seem to be adhered to; a substantial part of the waters have been declared a reserve.

How can such a Lilliputian country survive? The simple answer is: modesty and no illusions. The Palauans manage to live, not lavishly but not in poverty either. The figures are suitably tiny and this is no Qatar. There are a few relatively wealthy families, a handful of successful businessmen. Although no one will say so outright, it is clear that by holding out longer than the rest of the islands of Micronesia the Palauans negotiated an excellent deal at the end of the mandate. The “Compact of Free Association” with the United States provided a lump sum that became a sovereign fund.

Recent low interest rates, however, have made the fund less lucrative. Extra money can often be negotiated with the United States for specific projects. In return, the US can usually count on Palauan support in voting at the UN. The Compact gives Palauan citizens the right to live and work in the United States as well as to enlist (and rise) in the American military, an important source of well-paid employment. There have been proposals to find extra funds in offshore ships’ registry or even offshore financial services but the dodgy reputations of some of the countries that have taken that route has given the Palauans food for thought.

Schooling is universal and free, although many Palauans complain of the quality, especially at the high-school level. Primary schools are dotted across the archipelago, and middle school kids jump on a boat for Koror the way others  hop on a bus. The brightest young Palauans are often sent to boarding schools at age 12 or 13, to Hawaii, Guam or Chuuk (in the Marianas) which involves at least a six hour flight. They seem to find this normal. There is the Palau Community College, but for the most able, scholarships exist to take them further afield, usually to universities in Japan or the United States. An obvious problem is enticing well-educated young people to return where they are in demand for good jobs. Surprisingly, for such a small society, many have decided to do so, at least for the time being.

Tourism is a source of income, but many Palauans are wary. Palau is not a cheap destination, but that has not deterred large tour groups. From 2013, the number of Chinese tourists multiplied by a factor of four to five, mainly charter packages, to the point where local opinion, even in the business community, became alarmed. Charter flights from Hong Kong have been partially curtailed and new ones – inevitably more expensive – now fly in from Europe. At the same time, Chinese investors have jumped on a recent decision to allow 99-year land leases to construct new hotels. Several electoral candidates had argued that such leases be abolished, or at least reduced.

Other problems are emerging. A single road runs the length of Koror, the island’s main commercial and administrative centre. At rush hour it is completely clogged. Waste disposal – barely a thought five years ago – has become critical. Access to main tourist attractions, sensitive dive sites, a shark conservancy, a surprising mountain-top lake filled with non-stinging jellyfish, as well as fragile bits of the Rock Islands archipelago is limited, often severely restricted and in some cases totally forbidden.

Beyond difficult-to-enforce regulation of commercial fishing, even tourists’ take is controlled despite howls from some tour operators. In the same way, Palau’s reputation as the site of some of the world’s best dive spots stirs ambivalent reactions. More divers, more boats, more tourists mean more money. The pro- and anti-development politicians are all widely known.

Palau sent a representative to the Paris Environmental Conference, COP – XXI, in December 2015, and again to the COP – XXII in Morocco. He went on his own, not as a member of a small-island coalition; however strong his convictions, he cannot turn Palau into an ecological paradise alone. Volcanic-origin Palau is fortunate that it is not in immediate danger of disappearing beneath a rising ocean. That advantage could make it even more desirable for would-be developers. On the other hand, there is a real temptation to pull down the shutters and try to return to the comfort of isolation, and the old ways of life, forgotten by the outside world.

Liesl Graz is a journalist and writer living in Lake Geneva’s Canton of Vaud. Educated in the US and in France, she is a former Swiss correspondent for The Observer and The Economist. She has also written for various Swiss and French newspapers. Graz is the author of four well-received books about the Middle East.