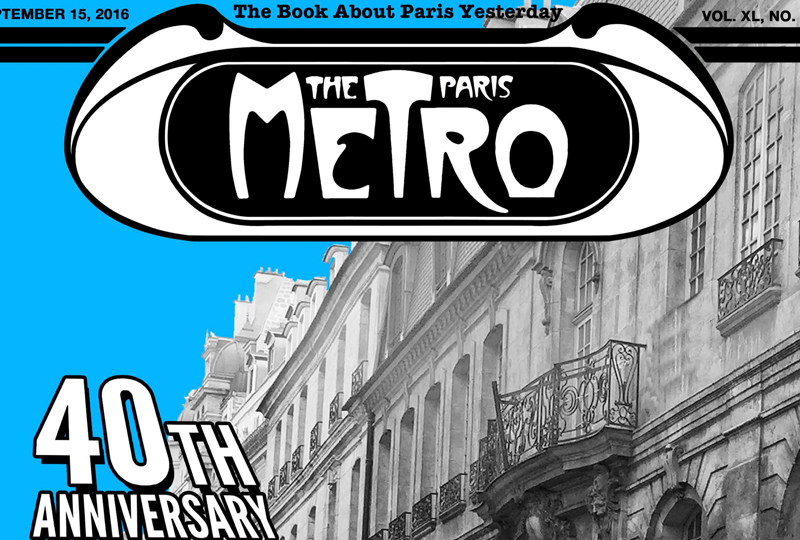 What could be more wonderful than being in Paris in 1976 when revolution was brewing and rebellion was in the air and you were young and the Seine was flowing and all of Paris was laid out for you like – as you know who said – a moveable feast? Well, only one thing. Being there to write about it.

In 1976, Joel Stratte-McClure, Tom Moore, Harry Stein, and several other young American writers of undoubted courage and possibly excessive zeal, started up an English-language magazine in The City of Light called The Paris Metro. And now, these many years later, they have remembered the creation, birth, and glorious if brief run of that magazine – remembered it all – a feat almost as remarkable as being there young and undaunted in Paris to write about it all in the first place.

And they are bringing it back to us, to all of us, in a collection of the original articles and wry, wise retrospectives glancing back. Old wine looking back on young wine, as it were; the effect is quite marvelous. If you were not – like Stratte-McClure and Moore and their cohorts – lucky enough to have been in Paris in the ‘70s, breathing life into a fledgling magazine that was a labor of love, gathering the riches of Paris into your arms and then scattering your spoils across those new, fresh pages…. Well, you can still go there now, through the memories summoned up in stunning prose and charming anecdote in this book. If you don’t melt in certain sections of this book, then you are unmeltable. If you don’t feel a sudden glow in your heart and don’t feel a sweet wine trickling down your throat as you peruse certain passages here, you have never been to Paris, and you have never been young….

It quickly becomes apparent, reading these articles – each and every one of them marvelous and worthwhile – that being in Paris at that time, and even better, writing for The Paris Metro at that time, was an unending adventure. There was something strange and wonderful and dazzling and often perplexing under every rock; er, under every Parisian stone. There were garret hotels where Metro writers stayed that were full of porn stars who wanted to be jazz singers, and deposed African chieftains who had terrifying masks on their walls and six wives crammed into their rooms, and starving novelists who despaired and sang to the wallpaper. There were fledgling writers on the Metro who drifted in and out of the Paris scene like clever fish on a coral reef, nibbling here, nibbling there, and then moving on: in every way feeling the city, in every way embracing life. This was Jack Kerouac meets Sartre meets Ernest Hemingway with Hunter Thompson tossed in for good measure. It was a heady time and a heady brew. Moveable feast, hah! It was a rolling banquet cart with a full jazz band and a cartful of dancing gypsies trailing behind.

And the staff – oh my God, the staff. If anything was more interesting than Paris itself, it was the people on the Metro staff – that is, the writers who have contributed their memories and reminiscences to this book. They were mostly Americans, quite young, still in their 20s and early 30s, eager for life and avid for fame and acclaim, and almost unanimously fearless and crazy – at least a little bit crazy. I think it helped to be crazy at The Metro, in the best slightly-addled, too-smart-to-be-alive French literary way. There were difficult geniuses on staff who had to be cooed and coddled and slack writers who were always, always late and stoned writers who were at their best when stoned and serious, diligent reporters who turned in everything on time and polished each word like a gemstone. There were, shall we say, quirks and oddities; peccadilloes, my dear. There was the wordsmith who had such a deviated septum that he could push his finger from one nostril to the other. And so on.

There were financial battles as well as business contretemps and political disagreements. There was the unending fight to turn in good copy and find great stories and somehow sell the ads that kept everything afloat. (And ultimately, did not – lack of ad revenue was the magazine’s demise. If only they could have sold the sheer fun!) These folks did great, seminal work at the Metro, and then went to TIME, to Life, to the New Yorker, to CNN, to running quite bourgeois but powerful media empires back in the US. And to being some of the great reporters and writers of their time. But they trained “on life”, as it were, in Paris, and on the Metro, and it made them better writers and better thinkers and….well, if not always better people, at the least much more interesting people.

Interesting people who did interesting things. There was the missed plane flight to Iran with Ayatollah Khomeini returning, so fatefully, to Tehran….There was the dating of the beautiful le Comte Chandon de Brialles….There was bumming around Paris half broke and hungry but interviewing the President of France and going to parties hosted by Andy Warhol….There was scuba diving in the Seine to prove how dirty and dangerous the water was! There was interviewing Dylan and Joan Baez and Rudolph Nureyev and Mary McCarthy – and quite often pissing them off with candid, frank articles! There was sitting in Hemingway’s bar in the Ritz sipping a brandy and planning your next article.

This was all the normal beat and life of the Metro. You thought hard, wrote hard, partied hard, and took down life in large fast gulps. Jesus Christ, it was wonderful. It was a life for the young, reckless and hardy, certainly, but most of these folks – just because they WERE so smart and talented (if not always judicious or discreet) – survived. And they now live in Normandy, or New York, or Mexico City, and have a long line of literary accolades and journalistic awards trailing behind them. Damn them. But all the fame, acclaim, wealth and power started with a few crazy kids working for a wild, upstart, arrogant, perky little publication called the Paris Metro. It didn’t succeed in the long run, but then skyrockets are only supposed to burn brightly for a time, aren’t they? And the people who made the magazine did succeed, in life, in love, in adventure and fame, generally speaking. Damn them.

The only thing wrong with reading this collection of saucy, salacious, dazzling, touching tales, is wanting to strangle yourself for not being there, if you had the chance to be – as I did. I was of the age. My old friend and college classmate Joel Stratte-McClure was publisher of the Metro and one of the chief writers – why didn’t I chuck over whatever I was doing at the time and go join him?….in Paris? I was roping steers and chasing wild horses out of the hills in Montana at the time, and that was not so bad either, and that was adventure too, certainly. But I will tell you: the food was a lot better in Paris than in Lolo, Montana, and there was a somewhat wider range of intriguing female comrades in Paris than in the Bitterroot Valley on the Idaho border. Maybe I should have gone.

But it doesn’t matter, because I can go there now, to Paris, and so can you, and breathe in all the rewards of lively minds and apt, rapt tongues and a fast, live it to the hilt pace; breathe in all the delights of excess and of zeal, in the one of the most fascinating places in the world in a fascinating time. Don’t read this book. Pick it up, inhale it, consume it, enjoy. And feel Paris and all the power of youth spread through your bones. Enjoy.

Lex Hames is an American writer and film-maker living in Helena, Montana. His latest book is All Fall Down, an election thriller.  Hames is currently developing a feature film, A Cowboy in China, about his father’s adventures in China in WWII.

The Paris Metro 40th Anniversary Issue: The Book About Paris Yesterday is available online at: https://www.createspace.com/6405288 and Amazon.com –  Hard-copies also available at WH Smith in Paris.

BOOK REVIEW: The Trade – Inside the Afghan Labyrinth by Jere Van Dyk

‘No Billag’ – A threat to Swiss public broadcasting : will the Swiss vote against radio and TV fees ?

International Tribunals: Justice must be seen to be done