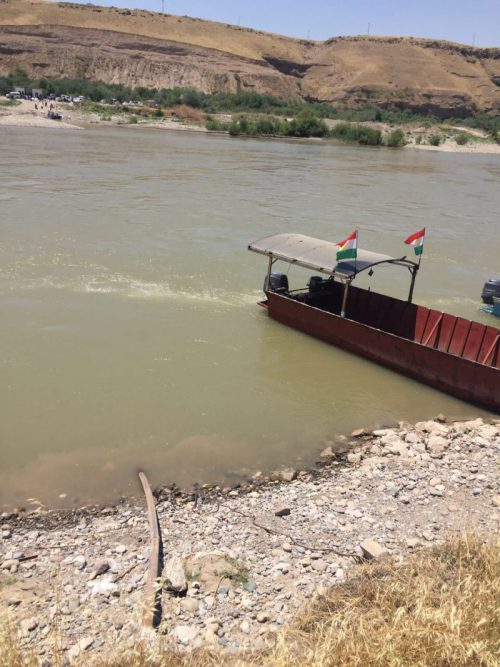 SWITZERLAND’S ABUNDANCE OF WATER “is one reason why we consider it our responsibility to act and to provide expertise on water issues,” says Eileen Hofstetter, whose remit comes under the Swiss Foreign Ministry. By providing a neutral platform for such concerns, water can also serve as an instrument of peace, particularly for countries caught up in conflict. “People and countries can meet if they have a water problem and to solve it. (See other articles in this Global Geneva Special Cover Report on water, notably Peter Hulm’s cover story Water and Peace in Switzerland and Peter Kenney’s Blue Wave of Peace).

Moreover, it is a way to address other issues that they might have,” she adds. Given its positive connotation as a natural resource required by all, no matter where in the world, water management has the advantage of taking relations a step further by fostering cooperation over the long-term. One example of good practice promoted by Switzerland is its Blue Peace Middle East Initiative, a process initially launched in 2011. (Also see Luisa Ballin’s article in Global Geneva on international members of parliament using water – and CERN as a working example – for collaborating on peace)

In terms of Swiss diplomacy but also development cooperation, this offers a potentially influential means of confidence-building and harmonization of water management for countries such as Iraq and Turkey. Both share the Tigris, a 1,750-km river somewhat longer than the Rhine (1,230 km), which is itself technically overseen by up to six European counterparts, including Lichtenstein and Austria. “The Tigris is an important river for Iraq, Turkey, Syria and Iran. But there is no accord, no contract on how to utilize the Tigris waters equitably and reasonably,” notes Hofstetter.

In recent years, Turkey, which commands the source of the Tigris, has unilaterally built numerous dams that make use of its waters along the 400 km within its own territory, primarily for agriculture, before the river flows into Iraq and then the Persian Gulf. Only 44 km of the Tigris passes through Syria. “We have tried to bring Turkey and Iraq together to start a process that aims not only at confidence-building between the two countries but also to develop a joint monitoring mechanism,” reports Hofstetter.

This produced a formal understanding between the two countries in 2014, which Switzerland is now building on in terms of concrete technical assistance following a request by the Iraqi water minister. It is now supporting Iraq in the building of monitoring stations along the Tigris, but has also identified, together with Ankara, a station on the Turkish side. “Our objective is eventually to exchange data on the Tigris waters between those two countries to lead to a common understanding of law patterns and management aspects of the Tigris water,” she explains.

As part of a second good practice, the water expert points out that the Middle East programme – despite ongoing political turmoil in the region – has now galvanized a community of 200 decision-makers composed of parliamentarians, former ministers, media representatives and researchers who regularly meet to discuss regional water issues. “They form an informal mechanism of dialogue, which does not exist in such a way in the Middle East,” Hofstetter notes. This includes players from Turkey, Jordan, Lebanon, Syria, plus from both sides of Iraq, Kurdistan and Iraq’s Baghdad. “The ultimate aim is to create in the future a cooperative arrangement on the water resource.”

Hofstetter recognizes that although the current situation does not represent a convenient time for implementing such a project, Switzerland and its partners are working precisely along those lines. This despite much having changed since the process first began seven years ago. “It is a lot different now due to the crisis in Syria. In the past, we had meetings in Amman, in Beirut, in Switzerland and we had study tours to the Rhine.” The SDC expert also recalls the extent with which water today is far less available because of the scars of war as well as pollution.

Hofstetter points out that water problems exist in most parts of the world, except perhaps in a few Nordic countries. In the United States, for example, only one percent of water is processed by waste treatment plants. “This means that the overwhelming bulk of untreated water runs off into lakes and rivers. In turn, this can cause severe problems, or even water conflicts, because the clean water has to be allocated among different users and sectors.”