The following is part of Global Geneva’s ongoing Focus on Oceans series.

As an extraordinary oblong-shaped bivalve, oysters offer a low-carb, low-fat, protein punch packed with essential vitamins, minerals, and trace elements. Hence its new green age definition as a whole food. They’re so irresistible that there’s even a subgroup of vegans who make a special exception for them. Perhaps it’s due to the animal’s purported aphrodisiac powers! (See August, 2019 BBC World Service programme on oysters to the rescue).

For these reasons and more, oysters have been making a comeback over the past decade in restaurants and kitchens around the globe. Oysters, which exist in salt or brackish water in areas ranging from North America’s eastern seaboard, including the Caribbean, to Europe, Australia, Philippines and Japan, have served as a source of food for thousands of years.

The Romans, according to ‘garbage’ archaeologists who explore the diets of the past by rummaging through the remnants of rubbish disposals, engaged runners to carrier fresh oysters as a delicacy from Brittany to elite families living in colonies such as Trevorum (Trier in western Germany) to Augusta Rorica (Kaiseraugst in northern Switzerland), a relay journey that could take three days. By the early 19th century in Britain, however, oysters were a sort of precursor to fish and chips as they were considered a mainly cheap working class food eaten fried rather than raw.

As filter feeders, oysters can clean our oceans’ polluted waters by filtering out toxins. And at a time when with many coastal communities seeking ways of implementing disaster risk reduction in the face of the climate crisis, oyster reefs can also help mitigate storm surge and erosion.

Oyster shells break down in the water column, adding calcium to the water which helps counter ocean acidification caused by carbon emissions. In a dangerous algal bloom, for example, when nature delivers too much of a good thing, oysters will just go on a bloated bender and drink and drink until the excess algae is removed from the system. If they didn’t do this, the algae could suck all the oxygen out of the water column and create a dead zone where no marine life could survive.

A disastrous impact: the threat of pollution

The problem is that for all the good oysters can do, modern day pollution has far outpaced the rate at which these exceptional bivalves can save the planet. The result has been a global die-off in the wild to the point that oysters are now considered technically extinct. There are no longer enough of them in the wild to perform their natural function in the marine ecosystem.

Best-selling books in the United States like American Catch and The Big Oyster remind Americans how careless human waste disposal destroyed the massive oyster beds of the New York Harbor at the turn of the century and turned our oyster-loving (and oyster-exporting) nation into a nation of Thai shrimp eaters (and importers). In the 1600s, the harbour was home to 220,000 acres of oyster reefs, ensuring that they served as a meaningful export and staple food at home. The average American ate around 600 oysters a year. By the early 20th century, New York harbour was barren.

Today oysters are being summoned back in re-seeding and restoration projects around the world in an effort to restore water quality and marine habitats. The most ambitious of these, New York City’s Billion Oyster Project, is already well on its way to achieving its goal of seeding a billion oysters in the harbour by 2035. I grow crassostrea virginica oysters which are native to the East coast of the US. Another type of oyster known as belons (ostrea edulis), which were introduced from France in the 1950s, now exist in the wild in Maine, but we don’t farm them.

Of course, oysters alone can’t save the planet. We need global policies and cooperation on climate change and pollution. However, The Billion Oyster Project could never have happened without the US Clean Water Act of 1972 which prohibited dumping waste and sewage into the harbour. Before oysters could be used to restore the marine ecology, the environment needed to become less hostile to oysters. Today, thanks to the combined efforts of policy and oyster restoration, marine life that hasn’t been seen in New York waters for generations is finally back.

New York Harbor is just the tip of the iceberg. We need cooperation at a global level to save one of the best natural combatants of climate change.

As a farmer in the Gulf of Maine, where water is warming and acidifying at one of the fastest rates on the planet, our ideal shellfish growing conditions are threatened. Sure, warming waters means faster growing oysters, but it also means more abundant and virulent pathogens, predators and weather. Astonishing increases in significant rain events directly related to climate change keep farms from harvesting oysters for weeks at a time, significantly diminishing revenue.

Unexpected spells of arctic temperatures have wiped out farms. Some farmers are starting to look at indoor models of cultivation in order to better control their environment and steady production. But farming oysters inside, with all the infrastructure and power that it requires seems to contradict the very thing we most love about oysters, notably their contribution to our planet.

Return of the oyster farmer

Today, the United States are witnessing a growing number of oyster farmers, including myself, who have joined a shellfish coalition in cooperation with the Nature Conservancy that brings together oyster farmers from across the country to lobby for climate policy. Our membership has grown rapidly with chefs and distributors now are joining our ranks.

Recently many of our oyster farmer members from the East Coast and Gulf of Mexico united in DC. We met with our respective state representatives, sharing our personal and varied perspectives on how climate change has negatively affected our farms and livelihoods. The result has been a growing list of elected officials from both sides of the political aisle, who have heard our personal stories and acknowledged the economic impacts on our communities. They have expressed a willingness to cooperate on climate policy.

This is precisely the sort of collaboration that is urgently needed to save our oceans and the planet. But we also need this type of action on a global level. More advocacy, more policy, and more restoration projects. In the meantime, we can all do our part to encourage more oyster production by simply eating more oysters! 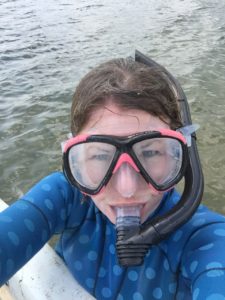