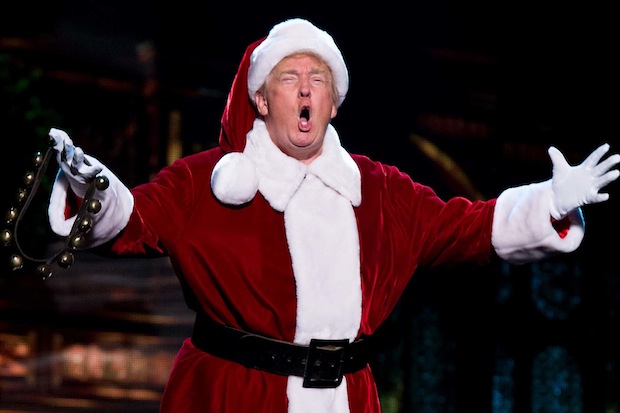 Déjà vu all over again. I caught a predawn cab to Roissy airport in Paris as I have so often in the past for an anxious flight to some tin-pot autarchy where border cops might stamp my passport, turn me away, or lock me up in a grim dark place.

But this time I was headed home to the land of the free, the home of the brave. On the plane to San Francisco, Edward Snowden, in Oliver Stone’s chilling film, made it clear why I was still so queasy.

Snowden gave up a perfectly good life when he saw our government had the means to watch our every move. My greatest fear, he said back then, is that in a few years we might elect a demagogue who “flips the switch, and we have turn-key tyranny.”

It’s Christmas now, time to savor what is good around us and reflect on how to preserve it until those little kids around the tree get a chance to do better than we have done.

So let’s take stock before we head into perhaps the most crucial year in American history.
Until Inauguration, Donald Trump’s tweet storm is only bluster, bombast and bullshit. After that, he needs Congress to approve key appointments and enshrine his new directions into law. State governments and the Supreme Court matter. Big time.

Doomsday is not at hand. Neither China nor Russia wants war. Both just want to deflate our self-importance and eat our lunch. Europe needs an Atlantic alliance. Terror, though a threat, should not be overestimated. Our worst enemy is ourselves.

We need reliable reporting — and places where we can find it. Fake news is less damaging than misconstrued real news. We need professionals to gather and interpret actual facts, up close, within a global context. If we don’t understand crises we face, we can’t confront them.

Our legislators and civil servants at every level must understand that if they put personal or party interests ahead of the people they work for, they’re toast. If we raise hell – by phone, mail, petitions, protests and boycotts – they will listen.

Starting now, we need to back candidates for 2018, people committed to reforming our corrupted, cumbersome political process. Trump’s victory was decided by no more voters than can fit into the Nebraska Cornhuskers’ football stadium.

This is not about Democrats and Republicans. John F. Kennedy and Ronald Reagan each evoked our “Shining City on a Hill,” harking back to John Winthrop in 1630 who reminded his flock why they left an oppressive monarchy to try something new.

Since it’s Christmas, we ought to consider the source. In the Sermon on the Mount (referred to as Matthew 5:14, Mr. President-elect), Jesus told his followers: “You are the light of the world. A city that is set on a hill cannot be hidden.”

American exceptionalism, that hoary phrase, does not mean that we’re somehow superior. Others have respected us because we’ve tried to hold up that light. If we give in to arrogance, ignorance or blind greed, we have only ourselves to blame.

Holidays coincide this year; all of us, whomever our gods, can get in the spirit. As Hanukah lights were lit in the White House, Barack Obama joked that people said he’d be gone in a year, but he lasted eight. Miracles happen, and nothing is lost yet.

Contributing editor for Global Geneva, Mort Rosenblum is one of America’s leading foreign correspondents and a staunch advocate for independent reporting. He is also an author, former editor of The International Herald Tribune and a university lecturer on journalism.  His Mort Unplugged can be found at: https://www.facebook.com/reportingunlimited/?pnref=lhc