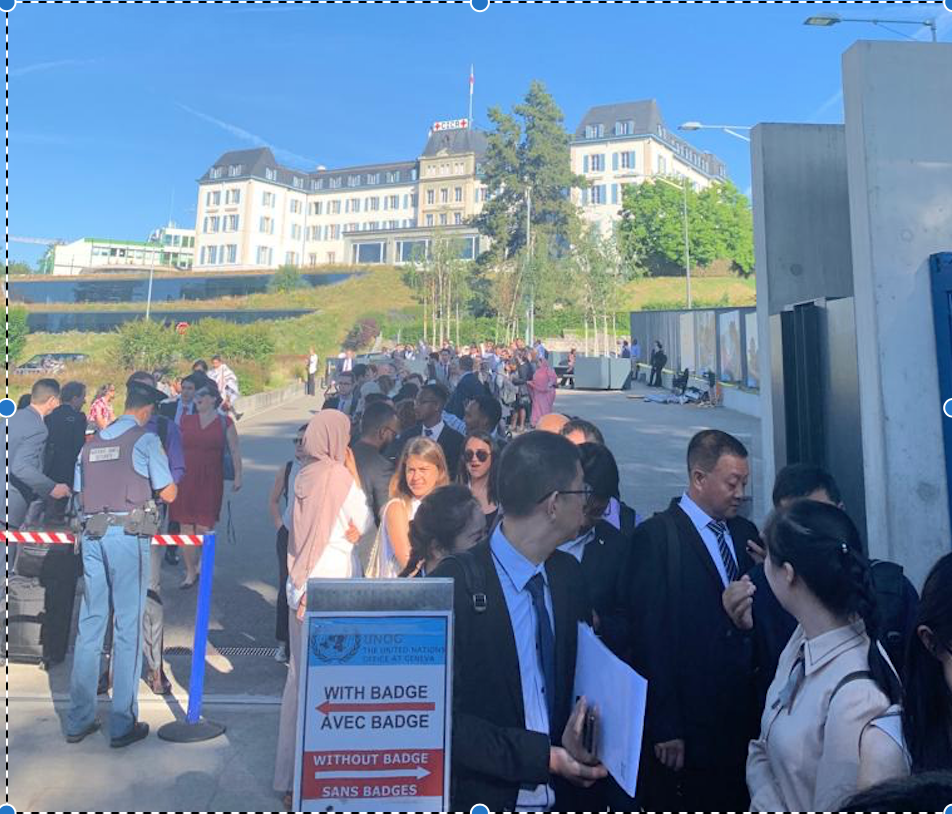 For an international gathering of such importance (the ECOSOC meeting was one of several major events at the Palais), it seems extraordinary that both the United Nations and the Swiss, the host government and proponent of the so-called “international Geneva” brand, had failed to provide the sort of support that one might expect for such a crucial event. Throngs of out-of-town representatives ranging from Scandinavian governments, the OECD and European Union to Canadian, Austrian and Indian NGOs who had travelled in especially found themselves waiting outside the main gates of the UN’s Palais des Nations for two hours or more in the hot sun.

Furthermore, there was no distinction between international delegates and ordinary tourists taking part in daily UN tours. They were all processed in the same lines. Many delegates missed critical meetings leaving them furious. Other meetings were cancelled, but with no one informed. Many criticised the ‘incompetence’ and ‘lack of preparation’ of the organizers. “It’s pretty outrageous,” noted one British NGO representative who had flown in from Nairobi. “It’s not as if we’ve come in for our enjoyment, particularly at Geneva prices. We’ve got work to do,”

While some joked guardedly – and without too much political correctness – that this was what it must be like for Syrian or Yemeni refugees waiting to be processed (if only for two hours), they placed the blame squarely on the United Nations – and the Swiss. Many vented their frustrations with Tweets lambasting the organizers, but few offered solutions.

For one thing, UN processing, even for those with pre-accreditation, began at 8.00 am. At the World Economic Forum in Davos, which handles many more people, processing begins at 6.00 am and normally takes less than 10 minutes. Similarly, at Geneva airport, where passengers pass through equally tight security checks, the wait is rarely more than 20 minutes. Furthermore, given the large number of participants, there was no effort to even set up special processing tents in order to cope with such an expected surge.

Swiss officials, including the city’s International Geneva office, which seeks to promote this highly cosmopolitan lake region on the world stage, were quick to maintain that they were not actually responsible for the event despite their commitment to host delegates “in the best possible conditions”. It is up to the organizers, they say.

For their part, UN representatives argued that insufficient staff and funding were partially responsible for what many delegates had described as a ‘fiasco’. There is no reason why processing could not begin at 6.00 am, or even earlier, said a UN spokesperson, but this depends on whether funding is available for overtime.

She also maintained that Geneva airport security does not have to process accreditation as well. Yet, as delegates pointed out, they had already undergone pre-online accreditation, so failed to understand why it should take longer. Furthermore, as noted by UN officials, the organization has presented a Master Security Plan to the Swiss government, which would enable the entire pavilion area outside the Palais’ main gate to be covered (by 2023 it is hoped), preventing delegates from having to stand out in the sun or rain. So there is at least awareness conditions – and preparations – need to be improved.

Responding to complaints of lack of information, UN officials note that it is up to the organizers to provide the necessary details and updates to delegates, but, again, this all depends on funding or available staff. As part of the UN’s renovation plan for the Palais, for example, there will eventually be huge information screens. The recent International Labour Organization (ILO) meeting with 51 heads of state, a UN spokesperson pointed out, had indeed erected processing tents and proceeded “without major hiccups, thanks to efficient planning and appropriate financial provisions.”

Perception is what matters; not excuses

So perhaps, as some suggest, this says more about UN or state commitment to events dominated by governments and official delegations rather than those involving civil society, or “the people”, such as humanitarian response.

What needs to be recognized is that most people are not concerned by excuses or official justifications, but deal with perception. According to a number of delegates, including one Geneva-based ambassador, people simply wish to have a properly-run conference. As one northern European government representative put it: “There is no way that the Dutch or Swedish would have allowed this to happen. Such a conference is a matter of prestige. One expects more from the Swiss.”

The key challenge for the U.N. is how to deal with more effective security without turning the Palais des Nations into an impenetrable bastion that no longer provides access to the very people it is supposed to be representing. Ever since 9/11, security at the Palais, which was built in the 1930s to accommodate the League of Nations, the precursor of the United Nations, has tightened. Security has become even more stringent since the terrorist attacks in Paris in November 2015.

Prior to the World Trade Center attacks, virtually any member of the public could enter the Palais precincts. There were no walls, gates or electronic devices requiring special badges. For those who remember the 1980s and 1990s, the Palais des Nations was still very much a “People’s Palace” for NGO,  UN and government representatives to wander around freely, step into meetings or buttonhole members of the press. Even the public could stroll in, have lunch at one of the cafeterias or feed the peacocks in the Palais’ sprawling gardens (which technically belong to the people of Geneva) with its spectacular view of the Lake and Mont Blanc.

As outgoing UN Director-General Michael Møller admits: “There is a constant tension between the desire for greater openness and the – unfortunate – need for greater security. It involves tradeoffs, but our desire for maintaining and strengthening the Palais des Nations as a House of the People never diminishes.” (See Luisa Ballin’s Global Geneva article on Michael Møller)

The Palais des Nations: A clear security issue, but one with threatens openness

Nevertheless, there are fears that the United Nations is increasingly closing itself off from ‘ordinary’ human beings.  According to ACANU, the UN foreign correspondents’ association, access is becoming more difficult for journalists, particularly those who do not cover UN issues on a regular basis. As one reporter noted, “the UN should be delighted that journalists on the outside are also seeking to cover events.”

Many organizations no longer hold their meetings at the Palais, preferring instead to host them at other locations, such as the Graduate Institute’s Maison de la Paix or the International Conference Centre, where security is less tight or better managed. Or not in Geneva at all.

While public demonstrations are allowed by the Geneva authorities at the wooden ‘Chair’ (International Geneva’s free speech “Hyde Park corner”) just outside the Palais, there is always the fear that unruly protesters or even terrorists could enter the Palais grounds. Attacks against UN buildings around the world have ranged from bombings in August 2003 in Baghdad, December 2007 in Algiers, and August 2011 in Abuja, Nigeria, to assaults against the UN guest house in Kabul in 2009 and UN office in Somalia in June 2013. These remain part of the UN security psyche and hence, according to UN officials, have understandably lead to a certain paranoia.

So what can be done to ensure better – and more informed – access? As some suggest, why not engage UN Volunteers or even students to act as conference hosts? This would involve the outside more closely, plus offer exceptional volunteer experience to young people. This is what the World Economic Forum and other organizations do.

There also needs to be much closer – and publicly perceived – collaboration between the UN and its Swiss hosts. Many delegates interviewed in recent days have little or no idea what “international Geneva” implies. Clearly, there is a huge information gap and a failure to inform, particularly people and organizations outside of Switzerland. Hosting official “International Geneva” websites alone is not going to do the trick. The Palais des Nations and what the UN represents needs to be fully integrated into the region, including neighbouring France, supposedly also part of the “Greater Geneva” urban vision.

While the Swiss help fund a What’s On information desk for visiting delegates, many outsiders have little idea where to go once outside the Palais precincts. Unlike London, Bangkok or Hong Kong, there is no FCC (Foreign Correspondents Club) where anyone, whether diplomat, NGO representative, entrepreneur or journalist, can go to meet people, have a drink or meal, and attend a public evening lecture. The FFCs are often the first place where visitors will stop off to meet people or find out what’s happening. They also tend to close late, as the manager of the Bangkok FCC put it: “when the last member leaves.” (The current Club Suisse de la Presse will be undergoing renovation with still no clear role as to whether it may eventually incorporate a similarly-engaged FCC component).

With high profile events such as ECOSOC, some suggest, and particularly if the weather is good, why not have more public events, such as a large evening networking reception in the Palais gardens also open to the people of Geneva? This could be hosted by Global Compact companies, most of which claim to support the Sustainable Development Goals, as their contribution to International Geneva’s knowledge and global action hub.

According to recent official statistics, the UN last year hosted over 12,000 meetings involving over one million people. For its part, the International Geneva office points out that events organized by international organizations in Geneva itself topped a record, 3,364 meetings in 2017 – and this despite growing competition from other cities such as Copenhagen, Bonn or Bangkok.

So Geneva remains one of the world’s favourite – and most neutral – conference locations. Yet, as some warn, if both the UN and Geneva wish to step up to the mark on a more sustainable long-term basis, they will need to engage in far more out-of-the-box thinking, including more effective public information outreach worldwide. Poorly organized events do not help.

Foreign correspondent and author Edward Girardet is editor of Global Geneva magazine. He lives between Geneva and Bangkok.