SEVERAL MONTHS AGO, while chatting with a group of international aid workers in Bangkok, I was asked why we had chosen Global Geneva as the title for our magazine (www.global-geneva.com),particularly given that much of our content is produced by writers from all over the world.

“It’s an unusual concept,” one of them told me. “But it doesn’t seem to be about Geneva.” It’s an observation we often receive. And it usually takes a few minutes to explain why we consider the ‘Geneva’ brand so important as the world’s leading information hub for planetary themes, such as humanitarian action,climate change, human rights, conservation, health, peace and security, or world trade. And why it is so crucial to report them in a manner that makes them both inciteful and accessible to world-wide audiences, particularly young people.

On the surface, ‘international Geneva’ represents some 30 major United Nations and other international organizations, such as the International Committee of the Red Cross, World Trade Organization and the World Council of Churches, plus well over 400 non-governmental organizations ranging from the Geneva Centre for Security Policy and Interpeace to Médecins sans Frontières International and Medair.

More than a city or a region

But this does not even begin to take into account the scores of private sector companies, law firms, media groups and banks that operate internationally. Nor the hundreds (if not several thousand) of other globally-oriented players operating out of Switzerland, Lichtenstein and neighbouring border regions. And yet all are part of the ‘international Geneva’ concept. These include organizations such as the Anne Frank Foundation (See article on the Anne Frank legacy), ArtBasel and Bank of International Settlements in Basel; ETH, FIFA (See article on FIFA corruption) and the Andan Global Citizen’s Alliance in Zurich; EPFL, IMD, International Olympic Committee and the Jan Michalski Foundation in Lausanne;IUCN (See article on IUCN’s Inger Anderson) and WWF in Gland as well as Tree of Life Foundation, IBSA Foundation for Scientific Research and SwissStem Cell Foundation in Lugano.

A growing number of organizations located in neighbouring France, such as Interpol in Lyons and the Mérieux Foundation outside Annecy, consider Geneva a key focal point.

Every year, this exceptional international community hosts major conferences, workshops, cultural events, arbitration meetings or mediation retreats that attract hundreds of thousands of participants from all over the world. This is where Global Geneva is beginning to play a pivotal role.

As Michael Møller, until recently head of the United Nations Geneva office, points out (See Luisa Ballin’s article in the Sept-Nov. 2019 Fall  edition of Global Geneva), ‘International Geneva’ is more than just a city. It is a hub with global impact. And in many ways, the term “international Switzerland” might prove more appropriate. Regional UN hubs such as Nairobi, Vienna, Bangkok and even New York are also part of this same knowledge and operations vortex for dealing with issues such as climate change, disaster risk reduction, refugee action and conflict mediation.

Hence our decision to rely on highly diverse articles with ‘insight’ rather than ‘news’ combined with powerful story-telling based on quality and informed journalism provided by our world-wide network of over 2,000 reporters, writers, cartoonists, film-makers, photographers as well as specialists. Our aim is to help make ‘international Geneva’ issues more accessible – and engaging – to Swiss and world-wide audiences. In previous editions,for example, we have published Focus series exploring key global themes such as Geneva’s blue water wave or French water wizard for the planet, Alain Gachet),  the destruction of cultural heritage and polar regions. These are now part of our regular coverage.

In this edition, we are looking at Oceans, in particular, the impact of the earth’s steadily worsening climate crisis, an issue highlighted in one of our lead articles as “the race no one is winning.” Contributors, such as Liz Thompson of the Living Oceans’ Foundation, writes about their five-year planetary investigation by ship with scientists, journalists and students into the state of coral reefs around the world, while Elizabeth Kemf’s Letter from Florida reports on community struggles to save local cultural heritage and environment from rampant urban development, including efforts to protect the coast-line against hurricanes.

Some of our articles highlight what is being done inthe way of innovation or galvanizing expertise for possible solutions to global challenges and problems. The article by journalist William Dowell on Agora Rising examines International Switzerland’s innovative approach to real time cancer research. The essay by Danish scientist Anders Meiborn of the Lausanne-based EPFL explains a transnational Red Sea project that could help save the world’s corals. Another article by Peter Hulm looks into how Coral Vita, an entrepreneurial initiative recognized by UNEP’s Young Champion of the Earth initiative, is already providing ways of ‘recultivating’ new corals.

Equally important for us is to obtain the perspective from the field based on first-hand experiences. Aid worker Louis Parkinson’s Letter from Cox’s Bazar in Bangladesh on how Burmese Rohingyas are struggling to survive in the world’s largest refugee camp offers a rich personal story that helps us better understand what it happening. Human rights specialist Norah Niland explores in her Letter from Sicily how the Mediterranean now represents the world’s deadliest anti-refugee wall as governments, such as Italy’s, are seeking to prevent humanitarians from doing their civic duty by criminalizing rescue operations.

Plus more unusual pieces about unusual places, notably South African reporter Peter Kenny’s look at what must be one of the world’s most architecturally bizarre capitals, Nur-Sultan (former Astana) of landlocked Kazakhstan,with its efforts to become the new ‘Geneva’ of Central Asia. Or Charles Norchi’s piece on how Switzerland – and Afghanistan – have helped enshrine the right of access for all to the oceans in modern-day international law of the sea. Or my own article on how Afghanistan’s women may offer a way of ending the country’s over 40-year-long war with Switzerland as a neutral arbiter to help bring diverse combatants to the negotiating table.

Ever since our first pilot edition in December, 2016, we have sought to develop Global Geneva into a trusted print and online magazine. It has been a struggle, but we are finally getting there. Numerous editors and journalists from New York and Port-au-Prince to Hong Kong and Islamabad have contributed their time – and content– while various groups and individuals, such as Swiss philanthropists Vera Hoffmann and Yann Borgstedt, and institutions such as the Alcea and Oak foundations, have provided us with grants.

Now moving into our seventh print and e-edition with a website that is increasingly drawing readers worldwide, we are emerging as International Geneva’s leading English-language publication on planetary concerns.

Youth Writes: A imaginative initiative for reaching out to young people

Critical to our global outreach is the development of our Youth Writes initiative, which kicked off in late 2018 with our Young Journalists and Writers Programme (YJWP). The purpose is not only to help young people improve their writing skills (a growing concern amongst numerous parents, teachers and university professors),but also how to discern what is credible – and what is not – in social media at a time when disinformation and false news threaten our democracies and ability to make informed decisions. (See our pilot workshop which took place in early 2019)

With 4,000 sponsored complimentary copies of Global Geneva being delivered to Swiss schools from Basel to Montreux, we launched our first young people’s journalism workshop at the ICRC Ecogia Training Centre in Versoix outside of Geneva in March.

We also started a writers’ competition for high school students, whose winners – all focusing (fact or fiction) on International Geneva themes – are scheduled to receive their awards at the Morges Book Festival 6-8 September, 2019. Depending on support, our hope is to extend this initiative world-wide, by developing educational partnerships (including working with high schools in countries such as Liberia and Sri Lanka) as a means of highlighting international Geneva and SDG themes. In this edition, we are publishing the intriguing entries of our three young writer laureates. Plus a piece in Breaking In, our section dealing with young people’s experiences in undertaking internships or volunteerships around the world.

Making our content for free worldwide – with your support

Finally, as part of Global Geneva’s business plan for the next two or three years, we have adopted an approach not unlike that of The Guardian newspaper. We wish to ensure that our content is made available as widely as possible – for free.

This includes our quality print edition (also available in e-format online), which we are finding to be crucial to our outreach strategy. More and more readers, including young people, are telling us that they enjoy the print version as it demonstrates both seriousness and quality. Many, too, say they read the print more readily than online content, which, as research institutions are increasingly demonstrating, is an ‘old school’ phenomenon that needs to be taken into account. People actually read print articles, but tend to skim through – and not necessarily absorb – online versions.

Furthermore, our print edition draws more readers to our website. However, in order to achieve an impact, and to survive, Global Geneva, which strives to be editorially independent in the public interest with critical, but solutions-oriented reporting, needs to ensure a mix of foundation grants, sponsorship, advertising, subscriptions and support membership. This coming autumn, we are launching a crowd-funding initiative, plus encouraging corporate subscriptions enabling us to make complimentary bulk copies available to companies, schools, universities and conferences. There are exciting times ahead, but our readers must also be our partners. 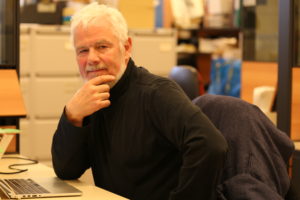