The World Economic Forum’s Klaus Schwab calls it the Fourth Industrial Revolution. It’s the one that will do away with middle-class and professional jobs as we know them. It has been described as a battle between humans and robots. But he is also convinced that International Geneva could lead the way to a humane answer to the problems the whole world will face from automation, digitization and instant communication throughout our lives.

Klaus Schwab’s answer is one that started his career as a global supernetworker: multi-stakeholder cooperation. The idea grew out of his conviction that businesses have to do more than simply answer to their shareholders. For the Geneva business professor who founded the World Economic Forum over 40 years ago, a company’s workers and the community where it operates are also stakeholders, and so sometimes are organizations across the world.

Today these stakeholders include various United Nations agencies, governments, civil society, and more. And Geneva, he argues, can lead the way in showing how to go about managing the revolution of on-demand work, driverless cars, 3D remote printing, designer genes, the Internet of things and jobless production.

Schwab recently (22 February, 2017) told an audience of Geneva dignitaries, young entrepreneurs and academics: “I would foresee and hope that Geneva becomes the global capital of multi-stakeholder cooperation.” He pointed not only to the Forum but also to initiatives such as the Global Vaccine Initiative (GAVI) as examples of how Geneva is bringing together communities beyond the usual suspects to work on global challenges. “The velocity of disruption [to conventional societies] and the acceleration of innovation are hard to comprehend or anticipate,” he says. The threat to individuals is “increasing levels of fragmentation, isolation and exclusion across societies.”

Schwab is not surprised by the recent populist backlash in Britain and the United States. He wrote about the prospect 21 years ago in an article that many dismissed at the time as alarmist. And when most commentators were predicting the U.K. would vote to remain in the European Union, Prof. Schwab had lunch with British Prime Minister David Cameron and came home convinced the Brexits would win. “During the whole discussion Prime Minister Cameron used only rational arguments,” he noted. But politics, he observed, has becoming increasingly built on “emotionalization”.

“People feel that the systems we have established have betrayed the individual. What has happened is a revolution against the system,” says Schwab. “People cannot cope with the speed of the change and the complexity.”

If any organization has the expertise and knowledge to tackle the challenges thrown up, it is the Forum. It has an emerging technologies task force, and Global Agenda Councils, for example, on the Future of Software and Society, and on Migration and the Future of Cities. In addition, from an ideas exchange platform between big business leaders, the Forum has expanded in recent years to a network of Global Shapers (often young people still in school), Young Global Leaders and Young Scientists. 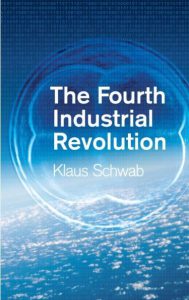 Schwab’s book putting together all these ideas was written in three months in collaboration with people across the world in time for the Forum’s 2016 Annual Meeting in Davos. He describes the The Fourth Industrial Revolution as “a crowd-sourced book, the product of the collective enlightened wisdom of the the Forum’s communities”. It has so far sold half a million copies.

At a ceremony to receive Geneva’s most prestigious prize, the Geneva Acknowledges Award at the region’s Enterprises Association headquarters, Schwab typically used the occasion to speak of Geneva’s prospects for the future as a world city. He also expressed his acknowledgement to Geneva, rather than accepting the award simply as a recognition, for what the city has given him: allowing to him base himself in Geneva at the university and in Cologny.

The fourth person to be singled out for the Geneva award, Prof. Schwab also used the occasion to issue a warning: “The world lacks a consistent, positive and common narrative that outlines the opportunities and challenges of the fourth industrial revolution.” This narrative is essential, he declares, to “avoid a backlash against the fundamental changes under way.” 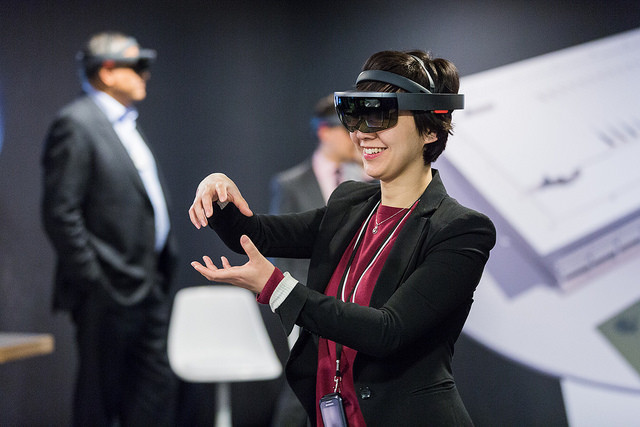 The evidence for the disruptions of the Fourth Industrial Revolution is bad enough. A 2013 report estimated 47 per cent of U.S. jobs could be computerized within 20 years. A World Economic Forum survey found the next five years would probably be flat in employment terms but with “significant job churn” within industries and skills within most occupations, but 50 per cent of human resources chiefs believe workers are not prepared for the changes.

Schwab points out the changes do have a positive side: “complex problem solving, social and systems skills will be far more in demand in 2020.” On the other hand, for example, by the mid-2020s “90 per cent of news could be generated by an algorithm, most of it without any of of human intervention”. So I guess fake news might be the only stories humans will write.

Countries relying on cheap labour to gain jobs and — they hope — stimulate development will find themselves locked out of this conventional path to Third World growth. Low-cost labour will no longer be an attraction for companies that need creativity and fast-responses to demand. In 1990, the three biggest companies in rustbelt Detroit had 1.2 million employees. In 2014 the three biggest Silicon Valley companies generated roughly the same revenues but had only 137,000 on their payrolls (a tenth).

Never a time for greater promise or potential peril

Today marginal costs tend towards zero. Robots already take care of some 80 per cent of automobile production. IBM’s Watson computer has shown itself far more accurate than doctors and medical technicians in diagnosing lung cancer — 90 per cent against 50 per cent in some cases. Others have noted that Uber, today the world’s largest taxi company, owns no vehicles. Facebook, the most popular media, creates no content. Alibaba, the most valuable retailer, has no inventory. Airbnb, the largest accommodation provider, owns no real estate.

“There has never been a time of greater promise or potential peril,” says Schwab. The promise is that business start-ups no longer need huge resources to establish a market for themselves. Autonomous motor vehicles could save millions of lives each year. Because of advancing computer power, genetic scientists no longer need to work through trial and error in diagnosing and treating diseases.

For workers in the digital cloud, the fourth revolution offers freedom, less stress and greater job satisfaction. Work-life integration could improve on work-life balance formulations. “I am concerned,” however, says Professor Schwab, “that the future of work will only allow a minority of individuals to achieve such fulfilment.”

The jobs thought most likely to fall victim to automation range from telemarketers to sports officials and couriers. Least likely: mental health workers and chief executives, according to a 2013 study. But in 2015 almost half the 800 executives and experts surveyed by the Forum’s Global Agenda Council on the future of software and society (45 per cent) expected an artificial machine to take a seat on a company board of directors by 2025.

Need to focus on the underlying conditions; not just technology

It’s one of 21 tipping points the Forum identified in 2015 as indicators of the way the world will change in 10 years. The Fourth Industrial Revolution further analyses 23 “Deep Shift” trends, listing positive and negative impacts, from technological change.

But Schwab insists: “We need to focus on getting the underlying conditions right, and not just concentrate on the technical aspects.” Business will have to ask themselves whether their culture accepts innovation and failure, he notes. As for governments, they must acknowledge the increasingly transient and evanescent nature of power as well as the greater impact of loose networks. “The WikiLeaks saga — in which a tiny non-state entity confronted a mammoth state — illustrates the asymmetry of the new power paradigm and the erosion of trust that often comes with it,” Schwab writes in his book.

At the Geneva award evening, he challenged the community here to take steps to ensure it offered systems leadership and platform leadership in tackling these global issues. This means bringing science and expertise into the dialogue, and remembering that the median age of the world’s human population is only 26, justifying giving more attention to young people.

Today government has to be responsive, he said. You need to interact continuously with those who have entrusted you with leadership, he added. He recalled a discussion with Singapore leader Lee Kwan Yew about the difference between Western principles of individualism and Asian concern for collective rights.

Today individuals have much more destructive power than before while collectivities often fail to protect individuals. “In Geneva we can find the right balance,” Schwab declared. But to do this, communities and individuals need to stand up for some basic human values, he observed. Three years ago the Forum set up a Global Ethics Council to identify these values. These turned out to be rather simple, he reported:

— Respect human dignity
— Serve the community you belong to as much as you serve yourself, and
— Be a trustee of those values

On these grounds, he named South African leader Nelson Mandela as the person who embodied most of the qualities of greatness. “He was very professional, I would say a very good politician. He was passionate and he had very good nerves,” he noted.

At this point, Schwab pulled a wad of papers out of his pocket. “I forgot,” he told the packed audience. “I had prepared a speech: 27 pages. You were spared.”

Contributing editor Peter Hulm, a journalist, worked as a consultant for the World Economic Forum, mainly for its Davos meeting, between 1984 and 2011.