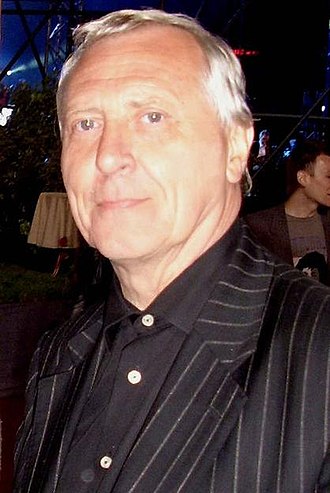 Come March 2022, Greenaway released a trailer for his long-in-the-works biopic on Romanian sculptor Constantin Brancusi titled Walking to Paris (Variety), first announced for 2016 and planned for showings from November 2022.  Variety also said he is working on three new projects: Lucca Mortis, Bosch and The Food of Love (planned for 2023). And there’s talk of a second film about Eisenstein. Perhaps Greenaway discovered that 80 can be the new 60.

Ten years ago he told the Guardian: “I don’t want to be a film-maker. I think painting is far more exciting and profound. It’s always at the back of my mind – let’s give up this silly business of film-making and concentrate on something more satisfying and worthwhile.”

He also pointed out that he had a child of 11 and another of 8 with his second wife Saskia Boddeke in Amsterdam, his home for 26 years: “They’re not going to want Daddy to disappear.”

In 2019 he wrote the text for Boddeke’s immersive art installation A Happy Death. His daughter Pip Greenaway appeared in her parents’ 2020 exhibition “Why is it so hard to love?”, which premiered in Lithuania. Zoë Greenaway, then 16, featured as Greenaway’s questioner in Boddeke’s 2017 documentary The Greenaway Alphabet, which won awards in Albania and Bulgaria.

Why did Greenaway drop off in Saas-Fee? Since 1998 the car-free Valais resort has been the site of regular seminars organized by the European Graduate School of Interdisciplinary studies, attended by a disparate mix of young creative artists, media professors with practical experience, and Web workers.

I studied there from 2001-2004.  The appeal? Not many universities could offer such film-makers as Greenaway, Werner Herzog and John Waters as active members of their faculty. Nor could many promise courses with French cultural guru Jean Baudrillard, US “performance art” lecturer Allucquére Rosanne Stone, feminist theorist Donna Haraway and Slovene culture critic Slavoj Zižek.

Though it has no physical campus, EGS set out to attract some of what its founding Dean Wolfgang Schirmacher calls “the best of the cybergeneration”. EGS was able count on Greenaway as a lecturer/presenter almost from the beginning.

The particular appeal of EGS is that professors lecture and present their current work, not their past productions. Students are encouraged to sit round the table with the faculty and exchange ideas as equals.

What came across from Greenaway’s public routines – often missed by critics who see only his severely intellectual approach and “the nudity, piss, shit, vomit, spit and other excretions deployed in his films” (Roger Ebert.com) – is his impish sense of humour, often delivered with pontifical assertiveness as if he brooked no contradiction.

The last time I saw him in Saas-Fee, he lived up to his reputation as a provocateur. As students and I cleaned up after drinks and snacks in the auditorium kitchen, closing a ground-breaking multimedia lecture on Rembrandt, Greenaway announced matter-of-factly that he planned to kill himself at 80. “I can’t think of anyone who has done anything remotely useful after the age of 80,” he later told the Guardian (LINK).

The tyranny of text

Once you recognize Greenaway’s puckishness you understand why his conviction that cinema is a visual medium that mistakenly prioritizes words — “Whether you’re Godard or Almodovar or Scorsese, it’s text, text, text. Everything begins with the text and this is a source of great anguish to me” — becomes at one presentation: “All film writers should be shot.”

Sometimes he has identified himself as Welsh and sometimes as English (he was born in Newport, raised in Essex and educated in London, though rejected from Art School). But his nationalist affiliations are not chauvinistic, as his cosmopolitan activities attest.

Furthermore, Greenaway has also been a careful and generous explicator of his ideas, many of them on YouTube and in video lectures on the EGS website.

His connections with Switzerland include the 1994 installation The Stairs on the streets of Geneva, and the 1999 film 8 1/2 Women, a rethinking of Fellini’s film 8 1/2. In Greenaway’s version the women turn the tables on a group of rich men trying to exploit them in Geneva.

For anyone interested in investigating Greenaway’s more esoteric ideas and explorations, I’d recommend the booklet Some Organizing Principles, an English-Welsh exhibition publication about his assemblage of objects from South Wales museums in 1993 and not mentioned in wikipedia. It’s dedicated to “the great determination man has to count, number and measure every phenomenon he experiences”.

Given that it ranges from the numeric grid in Albrecht Dürer’s Melencolia I/Melancholia (1514) to a metal crate with milk-bottles, this can remind you of the background to Greenaway’s creations – not just painterly filming but how he structures his productions, from the arithmetical editing governing Vertical Features Remake (1978) and the 92 deaths or near deaths featured in The Falls (1980) to his 2003-2004 Tulse Luper multimedia installations.

His most recent film, Eisenstein in Guanajuato, was premiered in 2015 and the Roger Ebert reviewer Godfrey Cheshire said then that he “hasn’t made a really good film in a quarter-century”. The write-up was so dismissive I can’t resist quoting further from it: “He’s now like Ken Russell on laughing gas.”

I’m sure Greenaway would appreciate that. He told the Guardian a common criticism of his films is that “they are far too interested in formalism and not enough interested in notions of emotional content,” he says. “It’s a criticism I can fully understand.” By the way, Eisenstein in Guanajuato later won Peter the Best Director Award at the International Film Festival of India (IFFI).

He has freely confessed his enthusiasm for Jean-Luc Godard’s Breathless and Alain Resnais’ Last Year in Marienbad, and his films often combine the formalistic inventiveness of the Resnais film with Godard’s jokey pastiche of the American gangster movie.

In Some Organizing Principles, “our lives are identified by counting and lettering,” says the author of “A Zed and Two Noughts” (1985), “Drowning by Numbers” (1988) and the straight-faced mockumentary 26 Bathrooms (1985). “After sixty life comes in decades,” he adds.

The Dürer engraving features a grid of 16 numerals arranged to add up to 34 horizontally, vertically and diagonally, he points out, though Greenaway insists “I have no particular belief in any magic of numbers.”

Throughout his career Greenaway has stuck to the conviction expressed in his introduction to the published screenplay of A Zed & Two Noughts (1986): “Cinema is far too rich and capable a medium to be merely left to the storytellers.” Nevertheless, film critics have mainly celebrated his films that come closest to narratives: The Draughtsman’s Contract (1982) and The Cook, the Thief, His Wife & Her Lover (1989).

But Greenaway has extended his cinema productions into multimedia events for many years. Even his published screenplays reproduce his master-copies with extra scenes, dialogue and comments rather than a transcription of the distributed film. In 1992 he told l’Avant-Scène du Cinéma: “A film is never really finished. You simply stop working on it.”

In The Draughtsman’s Contract, originally running to 4½ hours, Greenaway says, he wanted to explore the symbolism of fruits, the relationship between upper and lower floors in houses, the world of masters vs the world of servants, and many other elements, but these were all cut to produce the distributed film.

“By the time you see [a] film it may very well be sub-titled, re-edited, shortened, even censored, and every film is viewed at the discretion of the projectionist, the cinema manager, the architect of the cinema, the comfort of your seat and the attention of your neighbour,” he adds.

Some of his organizational procedures and pictorial ideas are now part of the mainstream, as seen in the web-TV series Squid Game, Money Heist and Severance (The Cook etc. was carefully colour-coded though rarely noted). But he has also reinvented cinema by extending it into multiple installations, as with his 2007 mockumentary on Rembrandt’s Night Watch, followed by plans for similar treatments of eight classical paintings.

His 2009 treatment of Veronese’s The Wedding of Cana managed to divide critics schizophrenically as much as his earlier pieces. The New York Times described it as “possibly the best unmanned art history lecture you’ll ever experience” while acknowledging in the same article that some viewers might regard it as “Disneyfied kitsch”, wikipedia records. For film theorists he’s as provocative as ever.

Peter Hulm received a PhD at EGS from what is now the Division of Philosophy, Art, and Critical Thought, and EGS also holds sessions in Malta, giving graduates EU recognition. EGS is holding its first Saas-Fee sessions since COVID from 16 June-31 July. Peter is Deputy Editor of Global Geneva.

Quotations from Greenaway on Wikipedia (LINK)