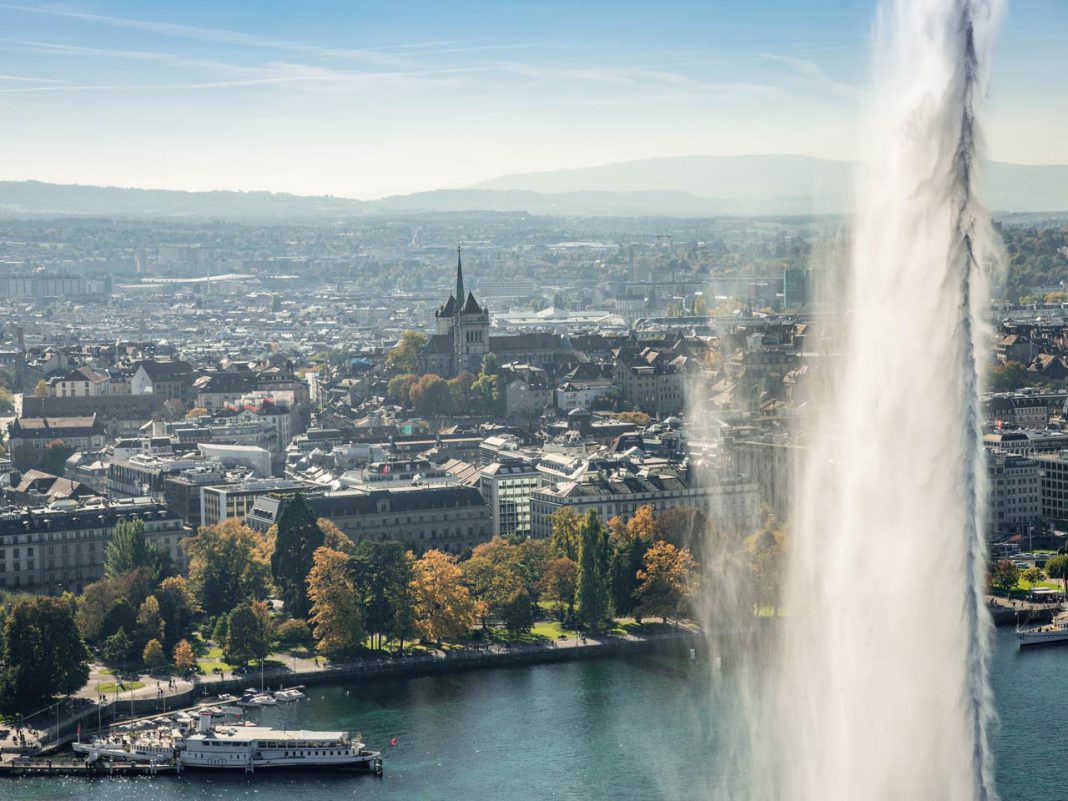 LIVING IN THE LAKE GENEVA AREA, on whichever side of the border, we cannot help but be aware of the critical importance – and force – of water in the quality of our lives and the needs of the regions around us. Switzerland is often referred to as Europe’s ‘water tower’. With its higher mountains still covered with snow at the height of summer – even if, sadly, the glaciers are fast receding – the nation still has an abundance of water as well as long-developed and sophisticated water technology to feed the streams and rivers and share this resource with neighbouring countries. Today Switzerland is also determined to be a global leader in water management.

We see a different perspective to take on water issues. It’s one of the easiest ways to make clear what the United Nations is talking about when it promotes the sustainability of planetary resources. The label itself is too much of a mouthful for some to grasp. Focusing on water – and the problems surrounding water resources and use – gives ordinary people not caught up in the jargon of sustainable development a way to understand exactly what is at stake.

As our cover stories indicate in the Oct/Nov. 2017 edition of Global Geneva, Switzerland can play a vital role as a source of expertise and political neutrality that could help promote greater collaboration in peaceful water usage worldwide, including areas caught up in strife. The coming together of belligerents, such as the Israelis and Palestinians, or players in potential conflicts – Egypt, Sudan and South Sudan – over the Nile, can bring a more equitable distribution of water with changes that benefit all.

But is Switzerland’s self-styled ‘Blue Peace’ initiative that important? Should we really care about what it has to offer in the way of water expertise, innovation and quiet diplomacy? Or the highlighting of these issues as a critical journalistic responsibility for reaching out to local or global audiences, regardless whether they live in Geneva, London, New York, Shanghai or Ouagadougou?

Geneva, as a brand name to market such efforts, can play an essential role with its reputation as a hub of international cooperation. It is also a unique goldmine of knowledge on planetary themes ranging from humanitarian response and culture to oil commodities, human rights and access to health. There is where the International Geneva community has a responsibility to ensure that what it represents is properly reported.

It also needs to recognize that English is one of the best ways for doing this. Unfortunately, many Genevans have a parochial view of how their city is perceived. Some, too, are suspicious of anything that comes from the outside, particularly a form of journalism that seeks to present itself as both independent and international.

Without denigrating other languages, we recognize that English is increasingly the tongue for neutral communication among the Swiss themselves (for some, it is regarded as Switzerland’s fifth national language), particularly for business, science, technology and development. It is also a vehicle for bridging linguistic and cultural divides. Of course, it is equally crucial to communicate in German, French, Arabic, Chinese and other languages, but this we leave to better qualified media partners willing to take on the challenge.

Geneva itself is a designation that represents global concerns and even the global citizen. Henry Dunant, the Genevan initiator of the Red Cross, made his name with his action in favour of wounded soldiers after seeing them in Italy. His initiative eventually embraced a world-wide movement, even if it did take 40 years for Geneva to properly recognize him. Today, various groups and individuals, whether the EPFL, IUCN, CERN, ArtBasel, Jan Michalski Foundation or Martin Ennals Award for Human Rights, command an influence in innovation, ideas, culture and public awareness across the planet.

A TRUSTED JOURNALISM THAT ENGAGES THE PUBLIC

Hence, our ‘Global Genevans’, a section in the magazine, can come from anywhere in the world. For example, IUCN’s Inger Andersen, who is Danish, works in Gland and is featured in this edition. Andersen stresses the need to tackle the SDGs as one. Clean energy and conflict mediation, for example, cannot be divorced from food security, climate change and education. They’re all part of the Big Picture.

And even though the SDGs do not include independent journalism and the right to reliable information as a goal, it is clear that reporting in the public interest is one of the most dynamic ways for putting the message across.

Over the past decades, there have been several attempts to establish an English-language publication aimed at the International Geneva scene. Most have vanished. It is comprehensible that some will conclude there is simply no market, or there are not enough interested readers.

The feedback for Global Geneva, based on its first two editions, however, has shown us that there is not only high level of interest, but a critical need for such a publication. Most people, for example, have no idea what an SDG is. So putting across how these goals affect us is one our challenges. Our audiences include a remarkably diverse community of well-travelled and informed UN, NGO, banking, diplomatic, educational, communications, student and business players. Many are living and working in Switzerland and across the border, but we are also seeing a steadily rising number of readers from around the globe.

In many ways, Global Geneva is perhaps best perceived as a ‘local’ magazine with a world-wide outreach. What is more, Global Geneva is intensively read. Our print and online content is currently reaching over 60,000 readers – and rising. In these times when mainstream media face unassailable competition from digital news, it is interesting that our readers devour the print edition more thoroughly – as some have told us, virtually every article. Whether print or online, people seem to want compelling stories with insight that explore key issues, ideas and lifestyles.

A COMMON RESPONSIBILITY AND A SHARED PROCESS

As with anyone producing a magazine in an age when content is so easily manipulated, good journalism is the only truly effective means for countering false news, propaganda and other forms of disinformation. We are particularly worried about how young people obtain their news. Hence our involvement with international high schools, colleges and universities in a bid to help students discern what is credible or not, notably in social media.

So, back to the question: does international Geneva need a global English-language magazine?

Any credible journalistic venture today needs to be linked to a common responsibility and a shared process. We want Global Geneva to be an independent publication, a sort of Everyman’s platform of trust, shared by all willing to participate in this process. It’s a long road from Gutenberg’s first printed page. One can imagine the even greater challenge to turn all the bits and bytes of global information streams into a common understanding that allows reasonable progress. But this means thinking outside the expected parameters, questioning what is happening, and coming up with solutions by everyone, whether entrepreneurs, innovators, thinkers, activists, policy-makers, lawyers, diplomats, journalists or students…