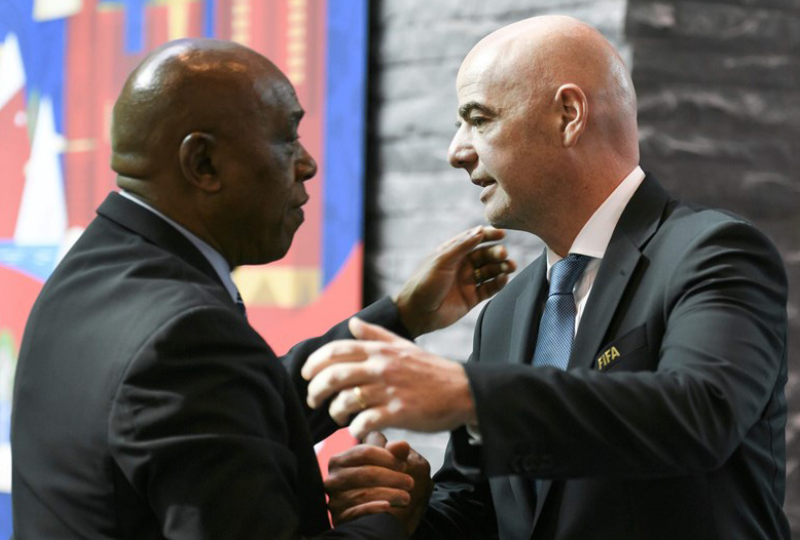 Football is a simple game. Twenty-two men chase a ball for 90 minutes and at the end the Germans always win. Or so maintained Gary Lineker, the popular TV commentator and former England international. He was wrong. Football, in fact, is a system that benefits a small group of people claiming to represent the game by exploiting the passion and emotions of millions around the world. For the past 40 years, this is precisely what game officials have been doing with the complicity of politicians, dictators, presidents, companies and TV networks.

For decades, FIFA (Fédération Internationale de Football Association), the structure created to govern football globally, opened the floodgates to the mind-boggling possibilities of buying the staging of a World Cup, commercial deals, the construction of stadia, the choice of referees, results on the pitch, ticketing, TV rights and even the ball itself.  “You have created a monster” is what João Havelange, FIFA’s Brazilian president from 1974 to 1998, warned  his successor Sepp Blatter.  The former president was not talking about corruption, bribes or commissions, but was referring to the fact that multinational companies and TV networks had been invited to the game, a move that would transform sports forever and take it to every corner of the globe. Despite the potential of hundreds of millions of dollars in fees, there was no oversight. What emerged instead was an unholy alliance that would enable a small group of officials and businessmen to control football and to kidnap all that it represented for the millions of fans around the world.

When Havelange assumed control of FIFA in the mid-1970s, the organization was little more than a modest entity located in the outskirts of Zurich. It had 12 employees and, according to Blatter’s own account, was financially in serious difficulty. Three aspects, however, would cause a revolution.

The first one was political. Havelange saw the decolonization process in Africa and Asia as an opportunity to enlarge the organization. After all, the newly independent countries across Africa and parts of Asia would need not only a flag and a seat at the United Nations, but also a national football team. FIFA supplied financial help, the uniforms and even the footballs to these new members. In exchange, Havelange gained strategic allies around the world.

The second was the decision to bring in sponsors. Adidas was one of the first to sponsor, notably, a crucial part of the game: the ball itself. Huge investments poured into FIFA, Adidas could claim that it owned the official ball of the World Cup, as if other balls would not prove appropriate. Other multinational companies followed suit. Today, the renowned tour of the football World Cup trophy is actually a Coca-Cola event. A fan can hardly take a picture of the world’s most desired sports cup in history without the red and white brand of the American company being fully visible.

It was the third element, however, that would enable football to become the richest and most popular sport on Earth. This was brought about by the increasing popularity of television coupled with the emergence of live broadcasting. In exchange for the exclusive rights to show the game, networks would pay millions of dollars to FIFA, which, in theory, it would re-invest as a public interest organization in football.

Political expansion, sponsors and the growth of television around the world soon began to transform FIFA from a small hilltop organisation on the outskirts of Switzerland’s largest city Zurich into a global superpower. Today, its accumulated Swiss financial reserves amount to some US$1.5 billion, a ten-fold increase in less than a decade. The last World Cup, in Brazil, generated a record revenue of US$5.7 billion for FIFA, more than twice what it had earned during the 2006 event hosted by Germany.

But what sort of monster has this led to? What mechanisms had been put into place to provide oversight and to control the massive amounts of cash that football was generating? Virtually none. This astonishing lack of control was precisely the Achilles heel of the newly globalized structure. As football grew, the ‘world government’ of this incredibly popular sport continued as it had during the 1970s. Only a small handful of people made all the actual decisions, with absolutely no transparency nor need to justify their actions or contracts. What they did achieve, however, was to bring in unprecedented profits.

The running of an organization over 40 years without control is precisely what led to the indictments of 14 FIFA officials and businessmen on 27 May 2015 by the US Department of Justice. This proved to be the downfall of an empire constructed outside of the legal system by a group of individuals who had declared their own monopoly of the game, accountable to no one. Even more astonishing, one by one, they all seemed to believe that they should benefit from the same immunities as heads of state. Instead, they found themselves arrested and jailed and are now being extradited to face charges in the US. Every single World Cup since 1998 is under suspicion of corruption.

The indictments revealed how media and marketing companies paid commissions to those in power, not only at FIFA, but other related sports organizations, to acquire, maintain or extend lucrative contracts for the broadcasting of matches. The marketing companies would then sell on these rights across the planet in return for large profits. In just over 20 years, these entities are alleged to have moved over US$150 million in bribes around the world, often using offshore centres, such as the Cayman Islands or Panama.

Bribery for lucrative broadcasting contracts purportedly included TV rights for various other tournaments, such as the rights to broadcast the Copa América (the largest football tournament in the Americas) from 2015 to 2023, purchased by Datisa, a joint venture of marketing companies from Argentina. According to the May 2015 US Department of Justice indictment, the bribes in this case alone reached US$110 million for a handful of sports officials. Key figures such as José Maria Marin, the former president of the Brazilian Football Confederation (Confederação Brasileira de Futebol: CBF), Eugenio Figueredo, the former head of the South American Football Confederation (CONMEBOL), and the presidents of each of the national associations in South America were all solicited, or intended to receive, bribes.

The legal frameworks of such organizations did not encourage investigation into their  decisions. Only until recently, FIFA enjoyed a status in Switzerland that made any form of investigation almost impossible. When questioned by journalists, FIFA officials usually refused to explain and simply pointed to their website for information.

Around the world, however, FIFA played a very simple game: any threats of investigations by national authorities would mean that the possibility of that country hosting a big event would be almost erased. In other words: blackmail. Marketing companies, investors, TV networks and multinational companies all danced to FIFA’s tune. And in this way, such behavior not only corrupted the system but enabled it to welcome if not directly ask for  compensations and commissions.

Corruption trickled down to every level of the game. In 2014 in Brazil, the world’s most important sports event left a very sour taste for ordinary Brazilians. Yet losing 7-1 to Germany was the least of their humiliations. The real legacy is the constantly evident white elephant stadiums from Brasilia to Manaus; the financial albatross that also hangs around the neck of the famous Rio de Janeiro Maracanã; and the various kickbacks and subsequent arrests and police raids of the local government offices in Natal, Recife and Salvador where games were played.

Can there be a new FIFA? Over the past year, Sepp Blatter, the organization’s Swiss former President from 1998 to 2015, his Secretary-General Jerome Valcke and dozens of other officials were banned from football, including French football hero Michel Platini, who also served as head of UEFA (Union of European Football Associations). But beyond a punishment for wrongdoings, these penalties were part of a wider power struggle between groups. With such a gold mine at their disposal, FIFA officials would fight long and hard to retain power and, with it, the capacity to enrich themselves by ‘selling’ football. Elections at FIFA and the regional confederations became not only a matter of sports, but decisive moments in establishing which groups would control these channels of payments.

This is what happened when, in February 2016, FIFA held a new election to find a substitute for the disgraced Blatter. The winner, Gianni Infantino, promised a “new FIFA”. He was young, had new ideas about football and assured everyone that a true reform would take place. But the strategy he used to convince FIFA members to vote for him was simply a repetition of what Havelange had done four decades earlier to keep himself in power for 24 years. The dual-national (Swiss and Italian) president opted to do exactly the same. He based his campaigning on two elements: a more generous distribution of FIFA money to national federations and an enlarged World Cup, from 32 to 40 teams. The strategy which had worked well in the 1970s proved just as successful in 2016. On his election, the new president promised a “full control” of the use of these funds. The new FIFA also immediately raised suspicions when, on taking office, Infantino made it clear that, despite various international investigations still underway, he had no intention of removing the right of Qatar to host the World Cup in 2022.

Over the past months, Infantino has been fighting a bloddy  internal battle forcing the creation of new FIFA to be put aside. Even adopted reform elements did not come without controversy. Claiming that the new president had abolished the independence of its oversight mechanisms, one of FIFA’s most influential officials, Domenico Scala, abandoned his post as Independent Auditor. He accused his new boss of simply not fulfilling the promise of submitting all FIFA documents for scrutiny. Internal accusations against Infantino presented for investigation, including the use of private jets owned by businessmen for official meetings, were found by the Ethics Committee not to  be in breach of rules.

The scandals, however, did not fade away. In September 2016, the Attorney General’s Office in Switzerland revealed that it had opened criminal proceedings in connection with the German Football Association (DFB). The suspects were members of the executive board of the organising committee for the 2006 World Cup in Germany, including the famed footballer, Franz Beckenbauer. The proceedings related to allegations of fraud, criminal mismanagement, money laundering and misappropriation. The investigations focus on the joint financing of a gala event, initially at the cost of EUR 7 million, later reduced to EUR 6.7 million. It is suspected that the officials knew that this sum was not being used to fund the gala event, but instead to repay a debt not owed by DFB. The debt, it appeared, was linked to a fund supposedly used to buy FIFA votes in support of Germany’s bid for the World Cup.

Since 2015, police investigations in different countries have revealed the extent to which football has been kidnapped by business groups and personal interests. Such operations against FIFA, however, are not the end of the story. But rather the beginning of a very painful process. Breaking this structure will require a more vigorous intervention of law enforcement althougb this alone may not be enough in itself. As long as there are no clear rules, no transparency in contracts for sponsors, TV rights and commercial partners, the room for undue influence from business interests will remain a threat. What many believe is needed is a  profound reform, a totally new institution, with clear guidelines for those who are elected to key FIFA positions. If not, this Swiss-based international organization  will continue to operate as a private, non-transparent company acting more as an instrument of ‘football oligarchs’ rather than the interests of all the millions of people, young and old, who follow or play this truly world game.