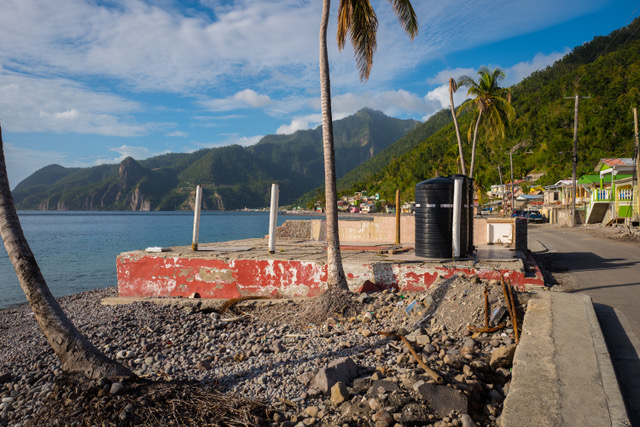 THE MASSIVE DESTRUCTION CAUSED BY MARIA is immediately visible as you fly in from the Caribbean Sea to Douglas-Charles Airport. Huge swathes of trees stand pale and naked, or lie felled across the mountainsides, like matchsticks violently scattered by a giant hand.

Here and there stands a coconut palm with crown intact. As you approach the first signs of habitation, all you see are patchworks of green plots and brilliant blue plastic tarpaulins. And where there is no blue, there are sections of walls, concrete foundations and piles of jagged debris. 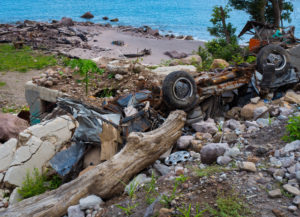 With the next hurricane season barely a month away (the first hurricane of the season was Beryl in early July), numerous roofs ripped off or damaged by Maria’s Category 5-plus winds (225 miles per hour) remain to be repaired or replaced. Parts, too, were damaged by flash floods, landslides and hurtling boulders. Bursting its banks, the Roseau River – a torrent of logs, coconuts, silt and even vehicles – raged through the country’s capital destroying homes but also inundating government buildings as well as smashing bridges and sewage lines.

Warren St. Jean, a Pentecostal pastor and former policeman whose concrete house foundations were washed away by a furious 20-foot wall of water and, debris echoed so many others in saying, “Our loss was great, but we still have life.”

For Dominica’s 74,000 people, however, life hardly has returned to normal. With nearly four-fifths of the population affected, an estimated 90 per cent of the island’s buildings sustained damaged or destroyed roofs. Many homes, too, were completely wrecked. Livelihoods were wiped out in a matter of hours with nearly all crops, livestock, fishing boats and infrastructure shattered. 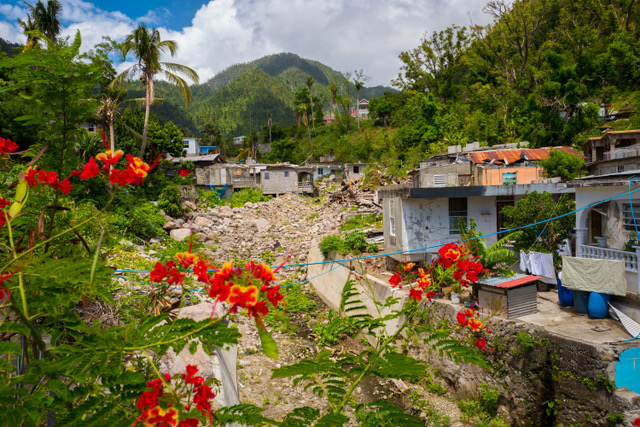 Dominica’s outdoors-oriented tourism industry marketed as the “Nature Island of the Caribbean” was also dealt a massive blow. Road and hiking access to many of its attractions – waterfalls, lakes, hot springs – were choked off; bridges were washed away, roads blocked by downed power lines, fallen trees and other debris. Much of its lush rainforest, a UNESCO World Heritage site, was denuded along with coastal woodlands.

Dominica’s Post-Disaster Needs Assessment (PDNA) estimates recovery costs for reconstruction and climate resilience in “building back better” at $1.37 billion. While the international humanitarian response was swift and as comprehensive as could be given the logistics, difficult terrain and scope of damage – at its peak, some eight UN agencies, 17 NGOs as well as the International Red Cross were involved – but now comes the main challenge: the long-term rebuilding that goes beyond mere recovery.

With the increase in Atlantic storms but also a rise in sea levels aggravated by climate change, island communities, similar to those in the Indian and Pacific Oceans, need to be rebuilt to withstand future catastrophe. 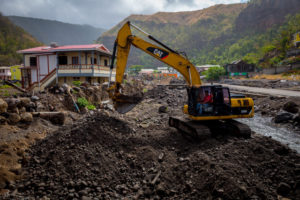 Yet despite best intentions, the recovery phase has been painfully slow. Many Dominicans, fearing a new onslaught of storms with the 2018 hurricane season, now find themselves even more vulnerable than before, especially in remote villages still lacking electricity, water or regular access to information. Government and humanitarian housing programmes have built less than 160 units of the 7,000 projected. Unemployment, too, is a deep concern, while people living in unstable hillsides suffer from deep psycho-social trauma. Even the slightest breeze or hint of rain creates anxiety among both children and adults.

Hurricane Maria also provoked long-simmering political and social rifts because of inadequate information and coordination. Based on numerous interviews with particular emphasis on listening to what ordinary people have to say, many Dominicans perceive that aid delivery has not always been fair. Political affiliations often determine who gets what and when. Frustration, however, now seems to have given way to resignation. As one government minister pointed out, even when there is a vision with everyone on board, “tribalism is high” with people making politics out of everything.

Without money or livelihoods, many are likely to move away. While the government recently extended the waiver of import taxes for building materials, progress is slow. For one, there are not enough boats to bring in supplies. Roofing screws, structural straps and other building materials have been hampered by procurement channels or are sitting in containers in the antiquated port.

A further problem is the need for people to better grasp the government’s new Guide for Housing Standards that demonstrates how optimal house, roof and foundation design can help withstand high winds, such as the use of screws rather than nails to hold down roofing. As Environmental Minister Joseph Isaac points out, “the old building specs just won’t do anymore. Our biggest challenge is to make people understand that ‘Build Back Better’ is not just not a cliché but something being put into practice.” Otherwise, he adds, “the cycle repeats itself.” Yet the lack of screws means that even if wood has arrived, the government cannot follow its own specifications.

While putting back roofs is the priority, Isaac continues, “we must look at our national image, clean up the debris, spur tourism again, and spread the word that the country is back.” The European Union, World Bank, China, Caricom, Cuba and other donors have been providing funding and other resources from the start. But far more investment is required to “build back better.”

This includes getting the private sector involved, such as convincing reinsurance companies to invest beyond just responding with limited cash to basic premiums. Only then can there be real reduction of disaster risk.

San Diego-based journalist and digital media specialist Jeff Carmel was in Dominica on assignment for Ground Truth Solutions, an international NGO headquartered in Vienna, and one of four humanitarian-to-humanitarian (H2H) groups tasked with gathering and disseminating information about the relief effort.

See related Global Geneva articles on disaster risk reduction.
Loretta Hieber-Girardet on disaster risk reduction and the need to invest in prevention.
https://www.global-geneva.com/investing-to-prevent-disaster/
Letter from a critical observer in the Himalayas. By Julien Bettler. https://www.global-geneva.com/the-third-pole-letter-from-a-critical-observer-in-the-himalayas/