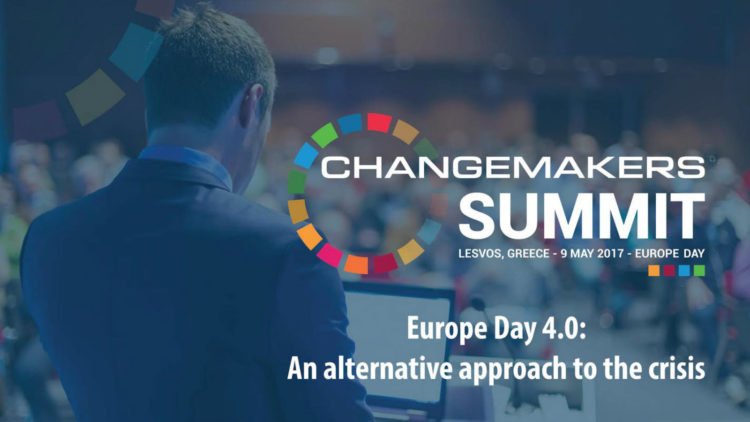 GG: You are not the High Commissioner for Refugees, you hold no political title or office, yet you are responding to a humanitarian crisis in a very unique and personal way. Who are you?

VS: My name is Vasili, I was born in South Africa to migrant parents, both born and bred on Lesvos. My mother and father left the island as teenagers due to the economic crisis back then. I’m a chartered accountant. By profession I was at PriceWaterhouseCoopers on the valuations, M&As and due diligence team. Prior to that I was a professional footballer, where I played for top division in Greece and South Africa.

GG: How did your work at PwC evolve into this, shall we say, third career shift as the founder of Changemakers Lab?

VS: In my last years with PwC I was focused on entrepreneurship and innovation, on how to position PwC to assist start-ups. We opened a PwC office within a leading co-working space in Cape Town, where I was based. It was something new for them as there was a big gap in the market between start-ups and corporates and I was really drawn to invest in start-ups and help them accelerate, to help unlock market access opportunities which is the biggest challenge for start-ups in general.

GG: And then upon leaving PwC you launched a new initiative in Lesvos, in 2015, coinciding with the refugee crisis.

VS: About two years ago I was having a discussion with stakeholders from the UK and Germany about what can be done about the Greek economic crisis, how can we attract investment into Greek start-ups and what can be done to help local businesses. At that stage we started hearing more about the refugees, so we decided to launch a hackathon of sorts around socially impactful tech solutions, which would be specific to solutions for refugees. It was called StartupBoat.

GG: Except not all of the team had actually visited the island before. And your personal exposure to the refugee situation, up to then, had been quite limited.

“I was in the midst of recruiting people from around Europe to join a hackathon to help refugees, but had not spoken to one refugee.” -Vasili Sofiadellis

VS: We were professionals coming from Facebook, McKinsey and PWC, about 24 of us, bringing people together from around Europe to have a hackathon on these solutions. But at that stage we had no clue what a refugee was. We had planned the event in Samos, but a week prior I came to Lesvos and I was absolutely shocked by the sheer numbers of refugees. I couldn’t believe my eyes. I was in the midst of recruiting people from around Europe to join a hackathon to help refugees, but had not spoken to one refugee.

GG: These border-crossing type encounters between vastly different cultures can be fairly delicate. There’s never really an easy way to say, “How can I help you?”

VS: But that’s exactly what I did! When we went to Samos I saw three refugees walking in the street, and I said, “Can I talk to you?” What I discovered is he was more scared of me than I was of him. He told us he was looking for the police to go and fetch his children, his wife and others who were stranded. He spoke perfect English, he had a smart phone.

GG: It completely destroyed your preconception of a refugee.

VS: Exactly. When I think of it now I get goosebumps. It just didn’t process. So then I told the man we’d take him to the police station, and my colleagues were saying “No, you can’t help a refugee you’re going to get arrested and put in jail.” I wasn’t having it, I said, “I don’t care, this man’s walking in the heat, we’re taking him to the police station.” So I dropped him off and we happened to see him again two hours later. The way this man greeted me, only for driving him 1 km, was as if I’d saved his life. All I did was drive him 1 km.

GG: It may also be a question of honouring someone’s basic human dignity. With that 1km you closed the gap between this man and his family.

VS: What was unforgettable about the people I’ve met is how positive they were, and forward-looking, and joking and laughing. These are people who packed all their belongings into one bag, not having a clue of what the future holds, and yet they are optimistic about the future. That was Aug. 2015. I went back to South Africa and I could not stop thinking about this experience.

GG: Then from 2016, is this when ChangemakersLab began taking shape?

VS: After my experience with StartupBoat we decided to do things differently. We wanted to leverage co-working spaces such as ImpactHub and the global social entrepreneurship community, to bring locals and refugees together under the same roof. On a monthly basis refugees would have the opportunity to pitch, with locals, ideas that could find a match with angel investors. That is, co-creation of sustainable solutions which have impact.

GG: This was still theoretical however, as the work of StartupBoat brought together international entrepreneurs to build tech. Changemakers Lab is quite different.

“We realised that we needed to bring locals and refugees together – more than building the tech.” – Vasili Sofiadellis

VS: Yes for StartupBoat there was almost no local representation, and we realised the importance of having locals onboard. Moreover, we realised that we needed to bring locals and refugees together – more than building the tech. So the strategy now was having a startup weekend on Lesvos where we could have 70 locals and 20 refugees. What we got was 25 refugees and 10 locals! We had taken the local support for granted, speaking to one or two and thinking it was sorted. That initiative was amazing. For the whole weekend we had teams working together, meeting key local actors who were very interested in what they saw.

GG: One of the complaints with the ‘hackathon’ trend in Geneva is there is a certain rush of creative energy, in a 48 hour burst, which quickly dissipates with no tangible results.

VS: Having people come together for an awesome experience, that’s really not the interest. What we have to do is find funding for the projects that come out of that, to continue driving those forward. Our aim is to gain support from the European Commission. If an angel investor wishes to invest, you match that funding with government funding. That model is based on natural integration where you’re starting to solve real problems.

GG: What you’re proposing then is a vehicle for smart philanthropy or alternative finance.

VS: Yes, Changemakers Lab wants to create awareness and see an alternative by taking this crisis and converting it into an opportunity, something really positive. We think there is scope here for donors to channel funding into co-working spaces to drive this initiative forward. We envision a global humanitarian tech hub where we invite people to bring their solutions to Lesvos, test them and implement them as pilots. Once we can prove that they work we send them to Geneva, with organisations like THE Port at CERN and Global Humanitarian Lab serving as a bridge.

“We envision a global humanitarian tech hub where we invite people to bring their solutions to Lesvos, test them and implement them as pilots.”
– Vasili Sofiadellis

GG: Several cost advantages come to mind when comparing Lesvos to Geneva. It is rare for developers based in Geneva to commit to projects without a fixed-term contract or scope of funding for at least three months. Based on fees, rents and overheads, I’d expect you’ll get three months of work from an independent dev team in Lesvos for the cost of one month in Geneva.

VS: The message is if you have an idea for driving social impact, bring it to Lesvos, let’s work on it together with refugees, locals, and international stakeholders. Once it’s proven, let’s bring it to Geneva, scale the solution and apply it to other areas.

GG: But you’re also sourcing talent locally, where you’ve had a pilot underway at the University of the Aegean, focusing on entrepreneurship.

VS: Changemakers Lab has partnered with the university to develop new business solutions with the students. It’s been phenomenal. We’ve worked three months with the university and now we are out raising funds. We took 25 students and had them workshop ideas with refugees, and you could see this perceptual shift, the same as happened to me, after seeing refugees in a different way. 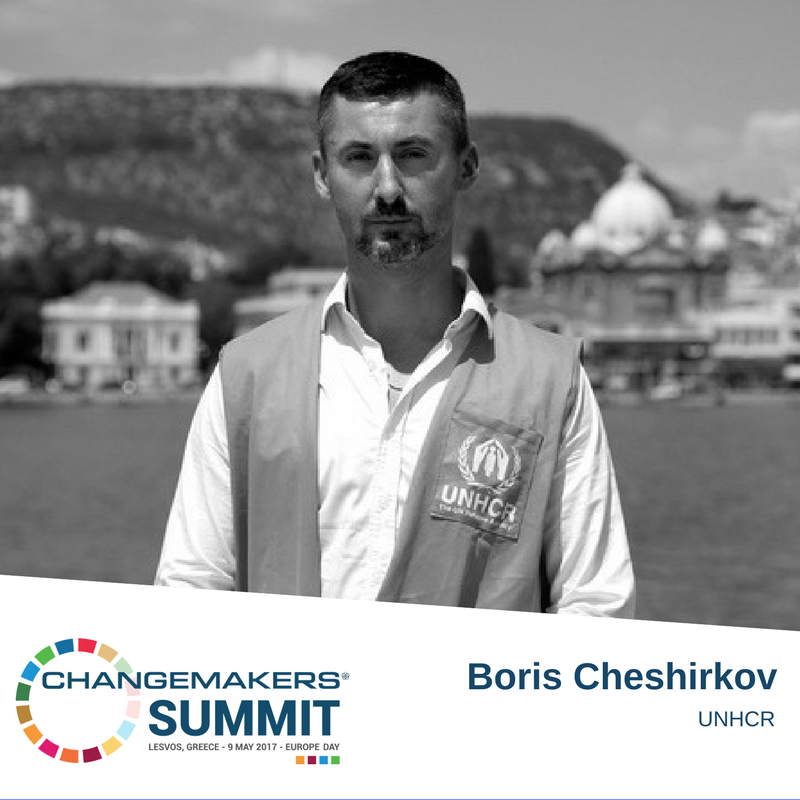 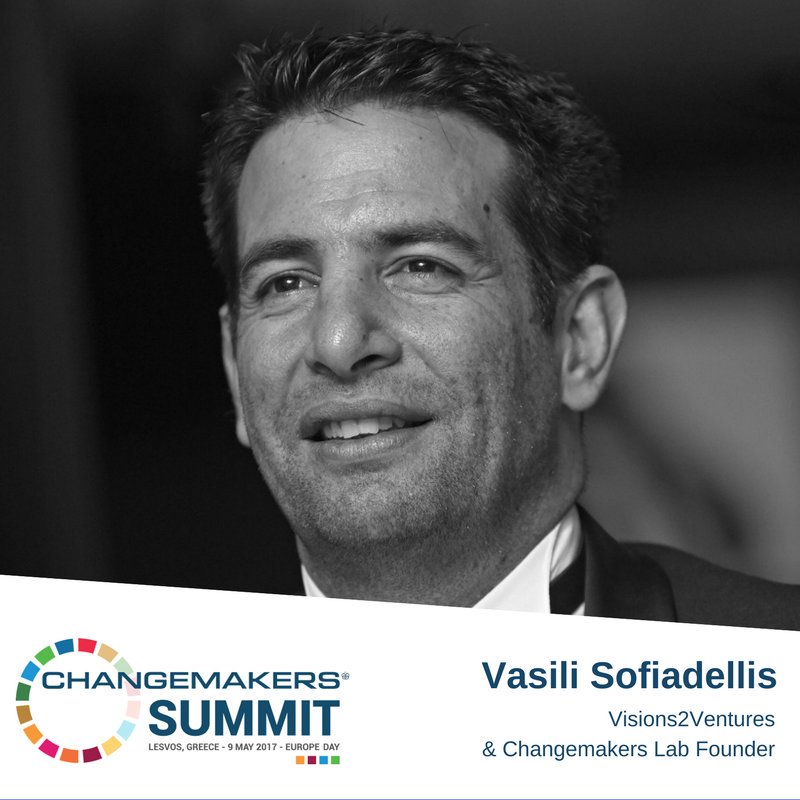 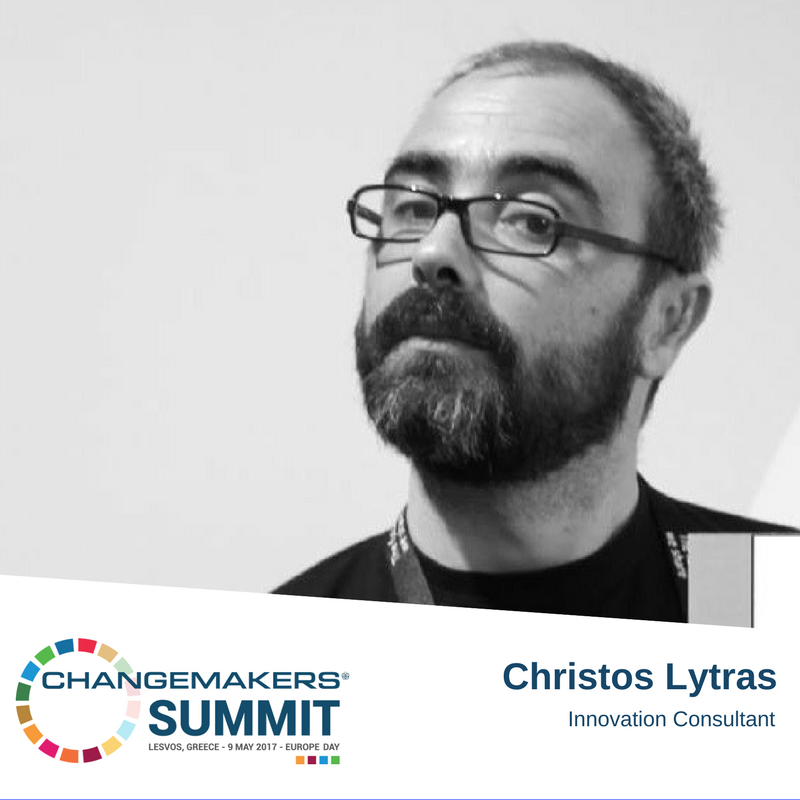 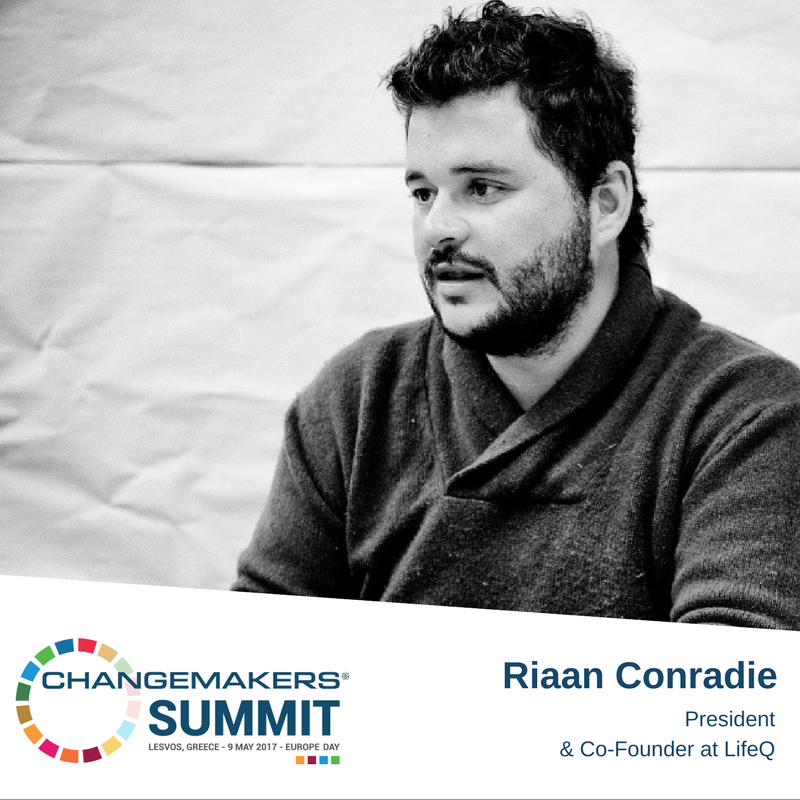 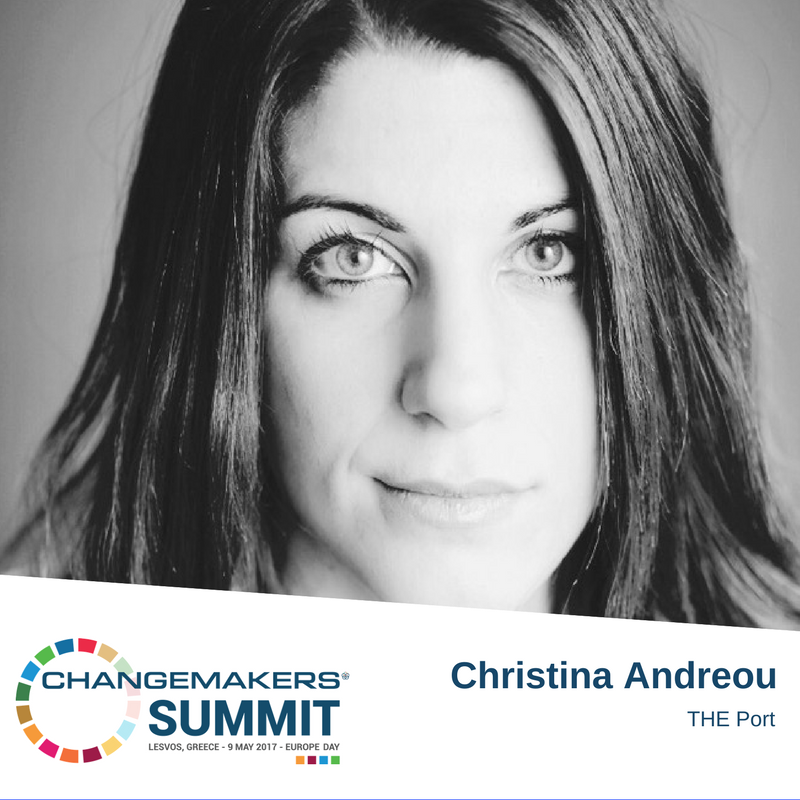 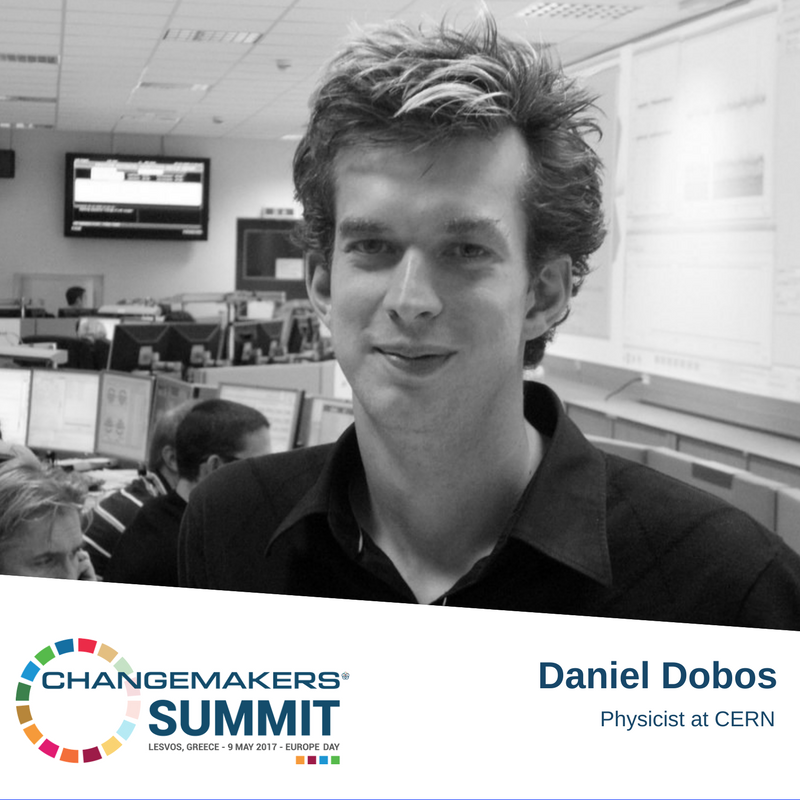 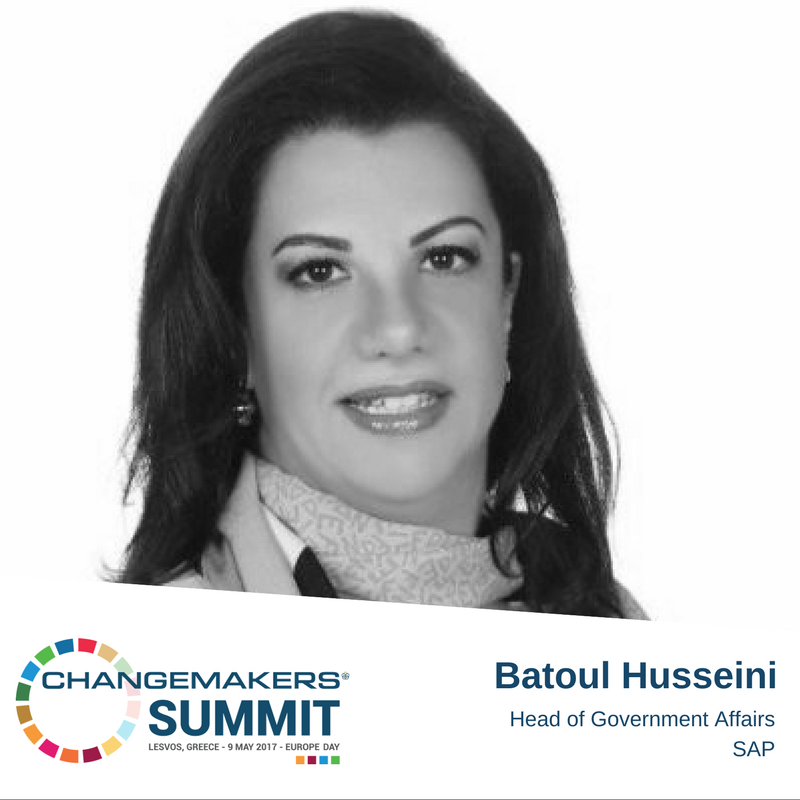 GG: Effectively all the elements to run a dedicated incubator are already there on Lesvos. What you’re doing is piecing together the various talents, drawing upon the international socent community, local developers, and refugees.

VS: This is definitely our mission today. We want to continue to bring these communities together, but to do so within a permanent structure. This is the conversation we’re having with THE Port Association and ImpactHub, to launch an official co-working space, so we can run these projects from Lesvos. The idea is to bring new solutions and training seminars, such as providing coding skills to locals and refugees. We also want to establish a makers lab where we can prototype and develop as well.

GG: I think what you’re describing is the future. In the 1990s we saw increased offshoring of industrial production, and today with the networked economy we can offshore digital creation and prototyping. And this is happening right now in Lesvos.

VS: It’s happening this week in fact. In preparation for Refugee Code Week, a global event happening in October, Mytilene and Athens are hosting a train the trainers exercise led by SAP. In the last week we had 260 locals enlist in the programme, who will learn Web programming and Scratch methodology in partnership with University of the Aegean. Participants will then reconvene in October to transfer this knowledge to the refugee communities here, including young adults and unaccompanied minors.

“Mytilene and Athens are hosting a train the trainers exercise led by SAP. In the last week we had 260 locals enlist in the programme.”
– Vasili Sofiadellis

GG: While this is one approach, opening new career possibilities for younger refugees, most adult refugees already have a career, albeit in economies which are no longer habitable. Are their ways to re-position their expertise?

VS: We are looking now to pilot tele-medicine initiatives, recruiting doctors and healthcare workers who can provide translation skills, and work with local specialists to test and implement these solutions. But because of the employment restrictions we can’t actively engage refugees as doctors but they can contribute to local needs. Some refugees however do have authorisation to work which makes it easier to find solutions. So the approach of Changemakers Lab is to focus on new solutions while at the same time creating awareness, to look at the problem from a systemic change perspective.

Learn more about ongoing Acceleration programmes with Changemakers Lab and be part of the #socent movement on Twitter @changemakerslab.

Crimes and punishments of radical artists in Putin’s Russia