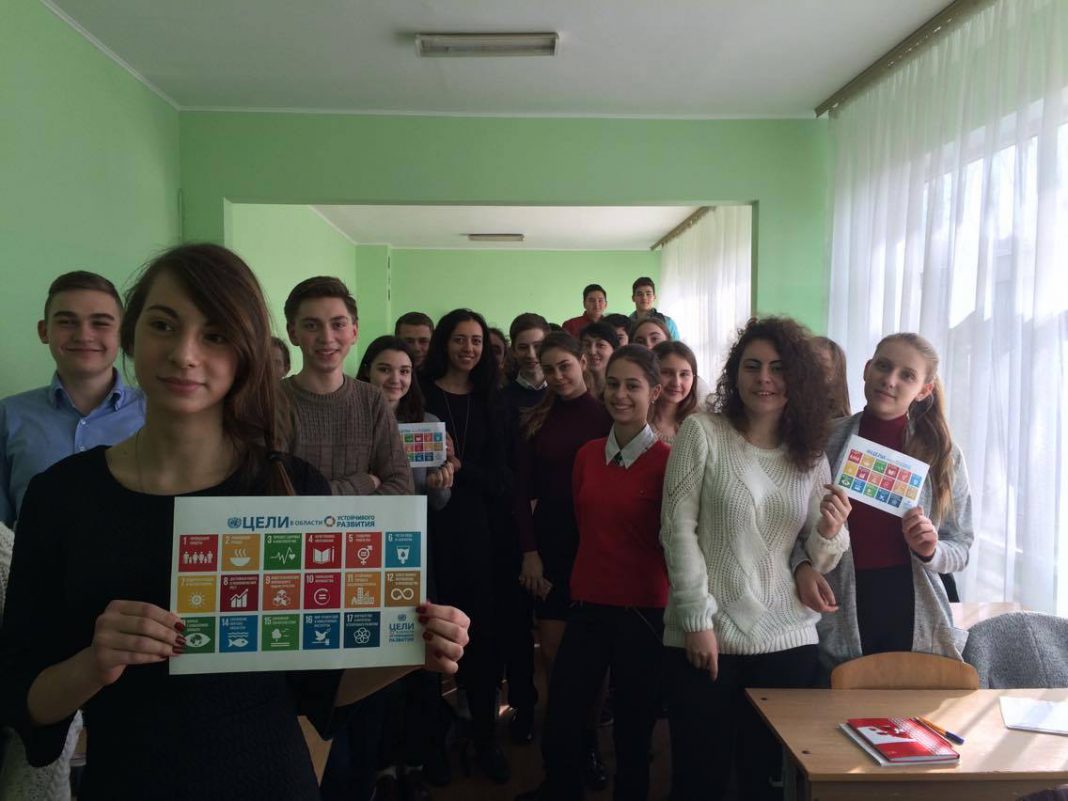 GG: The mission to improve education for girls in Ukraine is a path you began as a human rights lawyer. Tell us about your work with Kazakh political dissident Vladimir Kozlov.

MM: I worked on the Kozlov case within the OSCE as part of the delegation of Solicitors International Human Rights Group (SIHRG). I was 21 at the time, and this is where I learned how politics can influence human rights. This was a politically motivated case where the Kazakhstan government charged the defendant with soliciting mass protest in which at least 17 people were killed and dozens injured. This was a huge case in Kazakhstan and all over the world. That’s how I started my career in human rights.

GG: I gather the learning curve was steep. What were the limitations of defending human rights within larger, international organisations?

MM: After finishing the work at SIHRG I joined Amnesty International as a campaign intern to continue defending human rights in Eastern Europe and Central Asian countries. I kept following the trial processes around Zhanaozen massacre in Kazakhstan.  My heart sank when Rosa Tuletaeva, labour rights activist who was imprisoned for 5 years, had fallen extremely ill in prison. I started to initiate requests on her case so she could gain an independent medical evaluation. Some attempts were also made by other human rights organisations to influence the case, but nothing much really happened.

GG: Which gave you a sense that human rights law is also about politics, not just protecting people.

MM: This was a big case, but at the same time there were several smaller cases being handled. All of the resources go into the large cases which we talk about for the next five years, and the reality is, it’s the same talk without any real work. I wanted to do something about this woman who was in prison. I was just requesting to get her a free medical examination, to gain treatment, but I was unable to do anything about it. People truly believe in what they are doing but the bureaucratic machine works for itself. It makes you small and your voice quiet. At some point I felt like whether it is me writing campaign letters, or someone else, nothing significant would really change.

“All of the resources go into the large cases which we talk about for the next five years, and the reality is, it’s the same talk without any real work.” – Marija Musja

GG: Is this why you are now helping and doing in an independent capacity?

MM: I think working at Amnesty International was an opportunity to see how the system works from the inside, that’s what I learned. As part of their strategy they set “countries of priority” and “countries of non-priority”. Not a lot of effort put into the Central Asian countries, except Kazakhstan. I understand it’s the largest country with the highest influence, but when we look at the condition of human rights in the region as a whole, it is clear this approach is not as effective as it could be.

GG: And now as the founder of Empowerment Lab you’ve made a country-of-priority out of Ukraine.

MM: Yes it is a country of priority for me. I don’t like the idea of activists going somewhere and deciding what is right for everyone, because there are a lot of cultural factors which are not immediately apparent. But in view of recent political events in Ukraine, there is a clear desire by young people to work towards democratic development and to live free from corruption and ruling elites. This is why I’ve started my work in Ukraine, and not Russia, or Kazakhstan, for example. There is a real demand for democratic development and economic growth in Ukraine but they don’t have the necessary tools or experience.

MM: This was a survey we conducted in Spring 2017.  We went to a smaller district in Odessa Oblast called Bilhorod-Dnistrovskyi and nearby villages. Eight different schools participated in this survey. Covering a total of 359 children, 171 boys and 188 girls, aged between 13 -16 years old. Statistically there are more girls than boys.

What we determined from the poll is the most desired professions among children are: doctor, teacher, chef, sailor and programmer. 99% of those who desire to be a programmer are boys. Only 1% of girls expressed their interest in programming. The majority of the girls have aspirations in creativity-related careers, such as: journalist, architect, photographer, hairdresser, interpreter, choreographer, makeup artist, etc.

I should also mention when we asked ‘what are the most popular professions for adults in your peer group’ the results were the same, i.e. sailor, doctor, teacher, chef and lawyer. It just shows that in the past 20 past years nothing has changed much. I know from a personal perspective as I travelled there when I was little, I had relatives in Ukraine and friends there, so I know the obstacles. Having come from Estonia which developed very quickly after the break-up of the Soviet Union, I believe Ukraine could have been on the same level of development or even better. That’s why I want to expand their vision and give young people an opportunity for a better life, that’s the whole idea.

GG: If professional stereotypes haven’t changed in 20 years what is it in Ukraine that’s limiting people’s worldview?

MM: First of all, there are many socio-economic divides in Ukraine. If you go to Kiev, it’s very developed, they have plenty of resources and young people are extremely open-minded. In smaller towns, say the second or third largest cities, it’s also highly developed as well. You have great initiatives, you have business angels and foundations offering support to young people. But when you go to villages you start to understand they have been left behind. A majority of the population lives in remote areas, small towns and villages. The gap is so tremendous that it seems impossible to reconcile. Most people are living below the poverty line, and corruption and the rule of law are strong factors in this divide.

GG: Corruption has driven wealth to a few key cities. What are the other economic factors that influence development in Ukraine?

MM: Odessa is considered the most heavily affected by corruption, due to access to the Black Sea ports, so there is a concentration of wealth. The ex-president of Georgia, Mikheil Saakashvili had tried tackling corruption there but with little success. That is why I believe education is so important. Elections are also a critical factor. You can see with the pro-European Maidan movement there is a 10% who are leading this effort. These are people who are educated and well travelled, and are able to see the world differently. But for the majority of people in Ukraine the world is unknown.

GG: Where is change most needed, is it the education system, the labour market, or both?

MM: Education is one of the largest parts of the public sectors expenditures. In 2016, 80% of school graduates were admitted to university. The paradox is that at the same time 60% of the population lives below the poverty line. The problem is that young people have a low level of  practical skills and unequal access to the job market. This is why at Empowerment Lab we are trying to compensate for the lack of practical skills and knowledge.

GG: The work of Empowerment Lab focuses on a specific city or multiple cities?

MM: We are launching in Odessa Oblast with an initiative called Code in Creativity that addresses needs for 12 to 15 year old girls teaching basic programming skills. Based on girls’ career aspirations the course will focus on developing skills related to creative digital technology such as web development, graphic design and video editing. Our approach and teaching method is to view programming skills as an opportunity for self-realisation in any career field. In the beginning of next year, we are planning to start the course in eleven different classes, together with our local partners.

GG: And this initiative is exclusively for girls?

MM: Yes this target group has limited access to education and they are considered to be the most vulnerable. Ukraine remains one of the Europe’s most notorious sources of human trafficking, and socio-economic instability increases the volume of girls who are exported as forced labour and sex slaves every day. The aim of the course is to empower girls’ economically and to foster individual self-respect by teaching them the 21st century core skills.  By the end of the three months course, each girl will develop a personal webpage.

“Socio-economic instability increases the volume of girls who are exported as forced labour and sex slaves every day.”
– Marija Musja

We also take in consideration the age of girls’ transition to young women. Young girls have a tendency to internalise their frustration and suppressing girls’ creative personalities may lead to dissatisfaction and stress. According to The National Center on Addiction and Substance Abuse studies, 41% of females said that inability to cope with stress is the main reason for using drugs. Not to mention that Ukraine has one of the highest rates of HIV infection in Europe. Intravenous drug use remains the primary route of HIV transmission.

GG: So Code in Creativity training is almost a platform for young girls to see the world with a larger view.

MM: It is also an opportunity to unleash their creative voices online. By saying creativity, I mean an ability to produce ideas that are both original and adaptive.  We also incorporated an online lecture on Sustainable Development Goals. This reverts back to our survey, in which we asked children what they might wish for if they had a magic lantern, what would be their dream. The idea was to check the extent of their imagination, given that life circumstances can close our thinking. Some of the responses were very heartbreaking, saying ‘I would feed all the poor people’, I would build a charity centre for orphans” or ‘I want to stop the war’, ‘I would become a president and help seriously ill people and animals that have been abused’. We thought there could be a place here for learning about SDGs and how they can be a part of it. When you combine this with coding skills, it shows them opportunities to create start-ups and build whatever they want. That’s how we see it. I hear from girls in Switzerland who begin coding at the age of 12, this is exactly what they say. It’s an opportunity to talk to the computer, to create something from nothing.

GG: And the funding goals you have at present are for the 12-month outlook?

MM: For 12 months we will offer training to more than 400 girls living in remote areas. We expect the training will also promote gender equality in the local community and encourage more girls to engage in computer science. We are very lucky to have a lecturer from one of the local universities leading the courses, so she will be the one teaching our young future changemakers.

Learn how to support Code in Creativity – click here to provide one month of education for a girl in Ukraine. Your help can change a nation, one girl at a time.

Crimes and punishments of radical artists in Putin’s Russia