So why Nigeria, Kenya and South Africa?

Nigeria: With an estimated 186 million people, Nigeria has vast unfulfilled potential caused by decades poor leadership. President Muhammadu Buhari, now 75, in a country where the median age is just under 18, is out of touch with the population but still tries to run central government by decree. But constitutional reforms have forced him to devolve power to its 36 states which are now allowed to follow their own economic, trade and investment policies and this, though chaotic, might release the enormous energy and creativity of the population. By 2050 the population is expected to double from 165 million today to 330 million.

Kenya: East Africa’s key player, Kenya has a reasonably well-managed economy, a reasonably well-educated population and high levels of digital connectivity. But its economy is not inclusive and it suffers from volatile ethnic politics and zones of angry poverty. Kenya is run by wheeler-dealer politicians who provide for and ride on the backs of their ethnic groups and do battle or deals with other ethnic leaders. Tourism is nearly 20 percent of the economy. Any reported violence or disruption is a threat to this. So are the rail and road transport routes from Mombasa Port which is still the main access point for the region with routes reaching halfway across the continent.

South Africa: Sub-Saharan Africa’s only real heavy-weight, South Africa has a substantial manufacturing base and, despite its high levels of poverty, a sophisticated modern economy. Years of apartheid have created deep divisions among a black population that was given a third rate education system but now increasingly demand the same standard of living as the whites. The end of Jacob Zuma’s presidency could mean a fresh start but there are too many young South Africans who hoped for a better future but are excluded from the gated communities that protect the rich.

Britain may at last be taking Africa seriously

These three countries were chosen because they are – or will be – the main access to the three regions, west, east and southern Africa. The British government has spread its networks wider in Africa. In recent months it has established embassies in countries that have had only a tenuous relationship with the UK: Ivory Coast, Madagascar, Mali, South Sudan, Somalia and Liberia. All but Madagascar have suffered from civil wars. And all, apart from Mali which still suffers from incursions of Islamic militants, have recovered reasonably well. The trip confirms that Britain is taking Africa seriously at last. It is – after all – a cornucopia of minerals and agriculture waiting to be developed.

China: The real heavy-weight investor on the block

Yet what is the threat to this move? The UK is a bit late to return to a continent that it once fought in order to keep vast swathes of territory. In recent decades, however, Africa has been ignored or frequently treated as a basket case. Others, particularly China began moving in on Africa in the mid-1990s.

The Beijing government directly supported its major businesses, while thousands of Chinese individuals with small enterprises spread out across the continent. They sold all sorts of goods at prices that ordinary Africans could afford and the UK could not match. China also carried out much-needed continent-wide infrastructure projects, such as roads and railways. Most of them led in one way to another to coastal ports giving China easy access to Africa’s wealth but they also opened up transport for all. At the end of last month President Xi Jinping was in Johannesburg to attend a summit of emerging economies; Brazil, Russia, India, China and South Africa. All the other heads of state were there, too.

Meanwhile Britain has always seen its mission in Africa as one of concentrating on its poverty, human rights and conflict. The poverty of Africa mantra, thanks to rock stars such as Bob Geldof and aid agencies who needed to raise money, has given the world images of war and starving African babies. Not untrue but only in certain parts of Africa.

Those media images led to a false picture: Africa equals poverty. It is true in some places but it ignores the vast majority of Africans who get by quite well and would do even better if they were targets of investment rather than aid. A substantial government report on UK foreign direct investment issued in July referred only to Europe and America. Africa was lumped in with “rest of the world”.

Africa was also regarded as a place for aid, not investment. From 1989 until 1997, the small aid budget was dolled out by Baroness Lynda Chalker. She travelled Africa endlessly granting aid to what she saw as good governments and helping in emergencies. Her nickname in Whitehall was Mama Africa and  there was always a “now behave yourselves and don’t squander it” message. When the Labour Party came to power in 1997, Clare Short was appointed from the newly named Department for International Development. The aid budget then was £2.5 billion. By the time she left office in 2007, this stood at £8 billion. And apart from a drop in 2013, the figure surged to £14 billion today.

I have always argued that DFID’s slogan burned into every aid package should be: “Working for our own abolition”. Aid should not be necessary. But it would be fanciful to suggest that trade will make up the vast difference in wealth between Britain and African countries. What African countries need is investment in infrastructure, education, services and agriculture – including the processing. Britain’s offer to make this happen should be fair trade deals. At present many of UK companies channel their overseas profits into offshore banks, thereby reducing tax or avoiding it altogether.

Richard Dowden is a journalist and author. Former diplomatic editor of The Independent and then Africa Editor of The Economist, he is currently Executive Director of the Royal African Society. He is author of “Africa: Altered States, Ordinary Miracles” (Portobello Books, 2008). 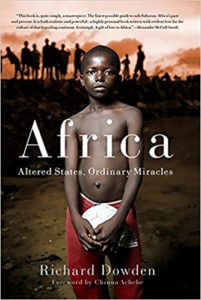