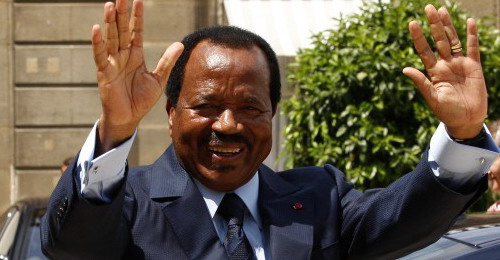 As with so many African leaders, Museveni started off in 1986 with hope for real change. But now, with corruption widespread, he just can’t leave it. Last February, he embarked on his fifth presidential term following campaign irregularities, thuggery and detention of political opponents. President Obama recently told African Union leaders that “nobody should be president for life.” Museveni claims that this will be his last, but few believe him.

At 92, Mugabe appears determined to hang on. When Zimbabwe gained independence in 1980, many felt it would become Africa’s new economic hub. Aspirations were high, particularly among the young, while the remaining whites felt they could work with him. But visions of Mugabe becoming a second Mandela quickly dissipated. His crudely corrupt and repressive ZANU-PF regime has indulged in crimes against humanity, racism and policies that economically ruined the country.

In power since 1975, first as prime minister, then president, Biya won his sixth term in 2011 after ridding the Constitution of term limits. At 83, he embraces a sense of governance politely described as ‘lackadaisical’. Nevertheless, he is considered to be the richest man in Cameroon with over 100 million dollars. His supporters are ‘urging’ him to run again in 2018, but past elections have proven a sham with “international observers” paid to declare them clean.

Africa’s longest ruler since 1979, Obiang has done well for himself – and his family – from the revenue produced by his oil-rich country and the US companies doing business there. Despite having one of the world’s highest per capita incomes, the country has not experienced such theoretical prosperity. Equatorial Guinea ranks terribly (138th) in the UN Development Index; most people do not have clean water and suffer from one of the highest infant mortality rates: 20 percent die before the age of five.

The fact that the International Criminal Court has indicted him for genocide does not particularly bother Bashir, who has been in power since 1989. Supported by fellow African leaders, but also the Muslim world, he has remained one of Africa’s most enduring heads of state. Ruling with an iron fist, he was re-elected in 2015 by 94% (allegedly) of voters with opposition parties desisting. Renowned for his corruption, Bashir – according to Wikileaks – has siphoned over nine billion dollars of Sudan’s funds into UK bank accounts. NEXT PAGE >

For a nation that still begs for humanitarian support, oil-rich Angola should rank as one of the continent’s wealthiest. Yet, considered by Transparency International as one of its most corrupt, there is very little trickle down. Two-thirds of its people live below the poverty line. In power for nearly four decades, Dos Santos is Africa’s richest president. He unabashedly runs his country like his own private investment firm and is believed to have amassed over 20 billion dollars. Last March, he promised to step down in 2018, but has made such pledges before – and reneged.

Another leader who ensures that his elitist supporters and corrupt civil servants enjoy the good life with spacious villas and other privileges, while the bulk of his country remain poor, Déby is a tough survivor. Despite being hated by human rights groups, he is now welcomed by the United States and France for his forthright opposition to Boko Haram. He has used his country’s oil revenue to bolster the military – and hence his own security support.

A former guerrilla leader, Afwerki has headed up Eritrea since independence from Ethiopia in 1993. With official claims that he earns a monthly salary of less than 12,000 dollars, Akwerki’s ruthless regime has repressed any modicum of free press and committed widespread human rights abuses. This has caused thousands of Eritreans, many of them young men, to flee the country and join the migrant exodus to Europe.

In power for 22 years, Jammeh is no believer in democracy, but has promised to crack down on corruption and raise living standards equal to that of the West. Nevertheless, as human rights advocates point out, his campaign against witchcraft resulted in arresting, torture and killing scores of suspects. He is also known for his hatred of homosexuals, threatening to slit their throats.

Denis Sassou-Nguesso of the Republic of Congo

In charge since 1977, Sassou-Nguesso, a former soldier, enriched himself and his buddies off his country’s oil wealth. But then, in an apparent pang of remorse, gave up power opening the door to multi-party elections in 1992. This did not last and he regained power in a 1997 coup. Sassou-Nguesso was re-elected in March 2016 in a vote widely considered rigged.

When he first came to power as a British public school teenager in 1986, many thought that his elitist background would produce an enlightened leader despite 2,000 bare-breasted virgins at his coronation. Instead, this absolute monarch has demonstrated little concern for his people. His polygamy (15 wives) does little to prevent HIV/AIDS (at 27 percent, the world’s highest) and he presides over a poverty-stricken nation (nearly 70 percent live on less than one dollar a day) with one of the lowest life expectancies (33 years).