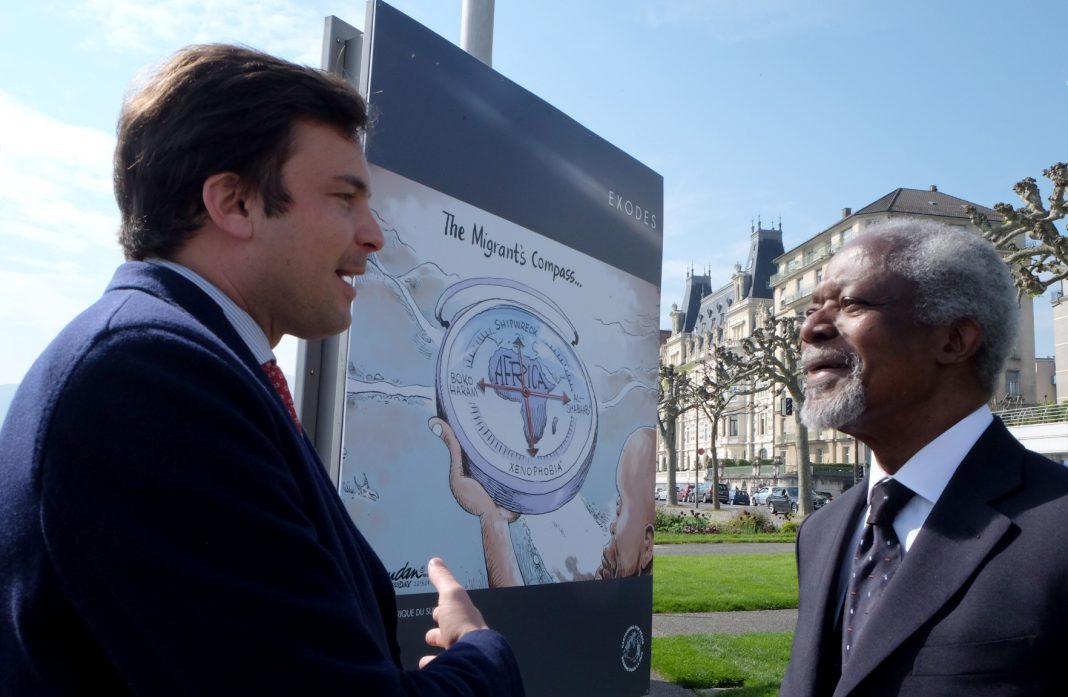 Only recently appointed mayor of Switzerland’s second largest city, 34-year-old Guillaume Barazzone is a man with a mission. As a member of the city council but also head of the Department of Environment and Security, plus a representative in the National Council, the country’s parliamentary lower house, he seems determined to push International Geneva as Switzerland’s principal diplomatic and economic front to the outside world. “I regard International Geneva as an exceptional ace, a priceless business card, for representing Geneva and Switzerland abroad,” he told Global Geneva.

Furthermore, “it is an exceptional key to employment,” he added, referring to the 40-odd major international organizations that operate out of the city, but also an estimated 1,000 NGOs and 174 diplomatic missions. “We’re looking at a good 28,000 jobs that rely on this international presence with its enormous impact on the world.”

Born in Geneva and speaking several languages, including English, his dual national Italian-Swiss background marks this energetic young lawyer’s cosmopolitan approach. A graduate of the University of Geneva followed by a year in Zurich, Barazzone went on to study law at Columbia Law School and then at Columbia University’s renowned School of International and Public Affairs. On his return to Switzerland, he passed the Geneva bar before joining the law firms of Lenz & Staehlin and then Schellenberg Wittmer. Finally, to top his international credentials, he was appointed in 2015 a Young Global Leader of Tomorrow by the World Economic Forum.

“International Geneva is crucial in terms of our image because we have the most important actors dealing with the key issues that affect the world at large,” he said. This includes humanitarian response, environment, migration, security, commerce and health. “Maintaining and developing International Geneva is absolutely vital both for our city and for Switzerland.”

Even though some observers argue that it has taken more than a few years for Berne to finally recognize the critical importance of International Geneva on the world stage, both the City and Cantons of Geneva, but also the Swiss government are directing increased support to the reinforcing of this vital global image. Such backing includes financial support to international organizations, notably the renovation of the Palais des Nations buildings, which formerly housed the League of Nations and now serve as Geneva headquarters for the United Nations. They are also supporting the expansion of the World Trade Organization’s (WTO) headquarters, initially constructed for the International Labour Organization (ILO), overlooking Lake Geneva.

According to Barazzone, the Mayor’s own office plans to accentuate the importance of Geneva’s economic and humanitarian organizations. “Geneva needs to recognize this very specific institutional role which basically constitutes the DNA of our city,” he said. “We have to do everything possible to retain these organizations because their work represents the spirit of Geneva when it comes to greater openness, tolerance, respect, dialogue and the need to create a more welcoming society.”

Barazzone admits that problems exist between Genevans themselves and the international civil servants living and working in their city. There has always been a tendency for the internationals, particularly at the UN, to exist on their own, such as sending their children to international rather than Swiss schools, or never making the effort to learn French. For their part, Genevans who are not part of the ‘international’ scene, go about their own lives.

Has this changed in recent years with all the efforts to promote a more functional International Geneva ? Barazzone answers not without a sense of humour. “Well, we have what you might describe as a spirit of Geneva and then you have the spirit of the Genevans. They are not the same thing. If in the past, local Genevans and International Geneva did not really communicate with each other, regarding each other with suspicion, these two worlds are now speaking more and more together.”

Before, he added, there was certainly a linguistic barrier, but today the new generations tend to speak English – the lingua franca of globalization. “Numerous expatriates have told me that they have very little contact with actual Swiss, so it’s up to us, the Geneva authorities, to encourage the local citizens and the citizens of International Geneva to get together more readily.” As both Genevans and internationals themselves point out, this is happening increasingly given the city’s cultural events, such as art festivals or the Human Rights Film Festival, or even multi-cultural food fairs.

“Genevans often point out that they find it difficult to understand the international organizations or the multi-national corporations,” Barazzone pointed out. “But the reverse is also true. When a foreigner visits Geneva or other Swiss cities they are struck by the Helvetic reserve that exists. At the same time, these same expatriates admit that when they do make friends with Genevans and other Swiss, these ties remain for a long time. ”

Barazzone further noted that the Geneva authorities are supporting the efforts of Michael Møller, the popular Danish head of the UN in Geneva, who is widely perceived as crucial instigator for building bridges between the two communities, but also with the world-at-large.

Another area of concern is ‘Le Grand Genève’ or Greater Geneva. This is an ambitious multi-sectoral approach that includes inter-city relations, communes, Lausanne and the Canton of Vaud as well as local and regional authorities in neigbouring France. Is this much-heralded initiative moving ahead, or is it in danger of peetering out ?

Guillaume Barazzone does not hide the fact that bi-lateral relations between Geneva and neighbouring France are ‘geometrically’ variable. “We have to continue developing good relations with our French neighbours, because these will always be ongoing. International Geneva was built on the City of Calvin’s ability to open up and to respect the views of others. Certain political forces are pushing to have Switzerland, and hence Geneva, isolate itself from its neighbours and in general with the world-at-large. This is dangerous. If you look at history, it is only when we created a united bloc that cantons were able to form a confederation based on mutual interests. ”

It is this openness to the world that is critical, Barazzone insisted. And  not only with commerce. Geneva is located in a region with more than one million inhabitants, including France with which Geneva shares over 100 kilometres of frontier. There are also huge numbers of frontaliers, or cross-border employees who work in Geneva. “All our interests are well beyond our frontiers, whether dealing with mobility or economic challenges.”

Among the most important issues confronting Greater Geneva is the current housing crisis. “Few new arrivals are able to find accommodation in Geneva; as a result many have opted to live in France. This means we have to build our future together and to resolve our problems together. We have to speak with each other and imagine new cross-border solutions, ” added the Geneva mayor.

This also means developing the Lyon-Turin-Geneva triangle. As a Swiss citizen of Italian origin, he regrets the lack of logistical links along this crucially important European axis, for some, the real centre of western Europe. “It is very much in our interests to improve the links between these region and not to forget that Europe is largely built along North-South lines in terms of mobility.”

Among Barazzone’s numerous commitments, both personal and as mayor, are his support for initiatives such as the Cartooning for Peace Foundation (CPF). Last September, he spoke at a charity concert by the Swiss-Romande Orchestra (OSR). Two CFP caricaturists, notably Chappatte and Plantu, drew alongside the musicians to the rhythm of Beethoven’s Heroic Symphony. “Cartooning for Peace participated as part of this spirit of Geneva, which favours tolerance and freedom of expression. These cartoonists of the press, who are part of the international network Drawings for Peace, are talented and courageous. They have extraordinary power with their pencils, summarizing a situation with humour and a few quick lines, ” he said.

The mayor further stressed his city’s commitment to the liberty of expression and press freedoms. “Denouncing the behaviour of dictators and highlighting problems such as violence and war through Cartooning for Peace and the International Prize for Press Drawings is a good example of this. We have courageous artists who are imprisoned or lose their jobs because of their work. In this way, Geneva is modestly fulfilling its role.“