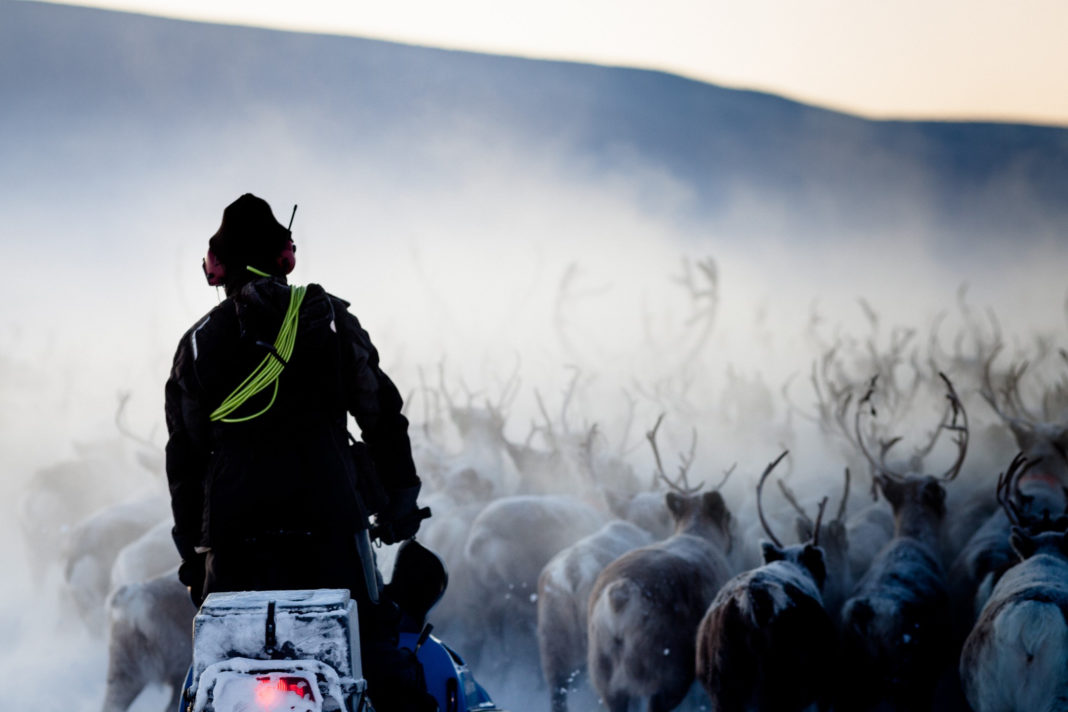 LOOKING TOWARDS SÁPMI (OR LAPLAND), we find the cultural homeland of the Sámi people, Europe’s northernmost indigenous population. Sápmi stretches from the Barents Sea to the White Sea across four countries: Norway, Sweden, Finland and Russia. As with many native people of the Arctic, the Sámi have hunted wild reindeer for thousands of years. In the 1500s, they began domesticating these caribou-like animals, becoming the nomadic herders we know today.

Reindeer herding differs from traditional husbandry in that the Sámi animals are semi-domesticated, meaning that they roam free in the wild for most of the year. There they can behave naturally in an environment to which they are genetically adapted, while their herders protect them from harm.

From a mainland European perspective, the area of northern Fennoscandia is revered for its pristine landscape, a veritable “wilderness”. For those practising their traditional livelihoods, however, it is simply “home”.

Reindeer husbandry by the semi-nomadic Sámi people goes back 2000 years. As social anthropologist Majken Paulsen writes, although these these Lapland people are resilient and highly adaptive, change is happening fast and becoming untenable.

Many find their ability to survive is being constantly put to the test. Contrary to popular belief, Scandinavian reindeer husbandry is not unstructured and “wild”. It involves a wide range of actors inhabiting a well-traversed and intimate terrain, with overlapping territorial practices and disputed claims to the same resources as southern industries.

Yet flexibility has long defined Sámi reindeer management. The Siida, a versatile cooperative unit traditionally organized through kinship relations, provides the necessary structure for each herding district. Throughout the year, herders combine and divide pasture, personnel and animals in order to reduce pressure on the land and to achieve the optimum relationship among humans, animals and nature itself.

To the chagrin of many Sámi, new legislation, physical barriers, human development, pasture regulations and climate change are increasingly challenging this traditional flexibility. This is tragically leading to conflicts between herders and the rest of society as pastures are encroached upon in the name of  ‘development’.

For example, Nasa Mountain, an ore-rich highland in the Norwegian-Swedish borderland, is known primarily for its silver mine. For the Sámi, the Nasa Silver Mine evokes painful memories.

With its creation in 1635, the mine conscripted their ancestors to work as part of its operations. As there were no roads connecting the mountain to civilization, the Sámi were forced use their reindeer to transport silver ore from the mine to its smelting site. The working conditions for both humans and animals were harsh, leading many to flee.

Today, already well into the 21st century, Nasa Mountain investors are once again planning to reopen the area for mining, but this time on the Norwegian side. The Oslo government has granted the necessary permits to open a quartz excavation operation in an area currently home to 25,000 Norwegian and Swedish reindeer. Every spring, reindeer herds migrate from both countries towards Nasa Mountain to give birth to new offspring. Once the animals have calved, their numbers rise to over 40,000 reindeer.

Whenever confronted with environmental difficulties in the past, such as poor pastures or threats from predators, Sámi herders often simply relocated their animals. But today, modern pasture law requires that each herding group remains within its own defined geographic area. Such rules imposed by distant legislators, who may not fully understand local needs or the intricacies of reindeer husbandry, ultimately leave herders with drastically fewer adaptive choices.

“If the mine opens, it is the end for many herders in the area, as our sacred calving land will be disturbed. The mine will scare away the reindeer, the migratory routes will be blocked and we have no other areas to relocate to,” said Olof Anders Kuhmunen, a reindeer herder, said in an interview with NRK, the national Norwegian broadcaster). 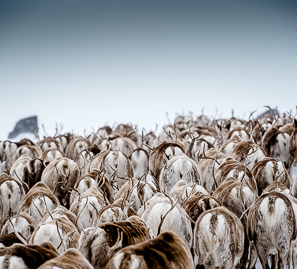 Overall, modern Sámi reindeer husbandry has tended to expand and evolve with relative success in line with the rest of society. This includes coping with sometimes significant and disruptive changes brought about by technological development. As far as the herders are concerned, their paramount concern remains – just as it did hundreds of years ago – the well-being of their animals.

Nevertheless, it remains a mounting struggle. Given that the climate is changing faster in the Arctic than in any other region of the world, the Sámi herders may be obliged to embrace even more radical adaptation practices in order to survive.

As already evident, arctic ecosystems, characterized by low biodiversity and highly specialized species, are potentially far more vulnerable to ecological disruptions caused by warming temperatures and seasonal variations. These are likely to push the geographic boundaries of infectious diseases and introduce new host species and pathogens that can inflict increased morbidity on both humans and animals. For the moment, the specifics of such impacts are little known.

Reindeer herders, veterinarians and the Norwegian Food Safety Authority all agree that the health conditions of today’s semi-domesticated herds are generally good. However, based on earlier descriptions of epizootic disease outbreaks in both domesticated and wild reindeer, new diseases can have devastating effects on their populations. The good health of today’s reindeer populations is attributed largely to their ability to roam large areas throughout most of the year. The “wilderness” is their health insurance; it keeps these animals strong and well.

As a result, the Sami herders have fought – and are still fighting – with governments, international companies and local developers for the rights of their animals. As a struggle for land, culture and livelihood, the outcome of this conflict is critical. Their future depends on it.

Majken Paulsen is a PhD student at Nord University, whose work is part of the Nordforsk-funded Nordic Centre of Excellence project, CLINF (Epidemiology of Infectious Diseases and the Impact on Northern Societies). This multidisciplinary research group investigates the effects of climate change on the geographic distribution and epidemiology of infectious diseases, including how they impact humans and animals in northern societies.

POLAR FOCUS – Earth’s sentinels for our climate future are essential.