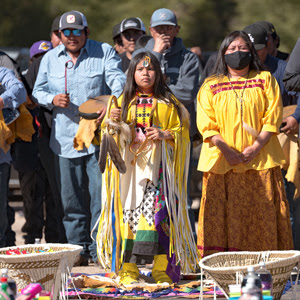 The following column by contributing editor, journalist and author Mort Rosenblum is from his regular comment The MortReport.

SUPERIOR, Arizona – Big Copper’s Last Stand is imminent at Oak Flat. Unlike Custer’s, the Indians seem likely to lose. A parting shot by Donald Trump is about to destroy the San Carlos Apaches’ equivalent of Mount Sinai, revered for millennia by earlier tribes.

The battle at the foot of Apache Leap escarpment is a telling microcosm of Trump’s headlong rush to open protected Native American land to mining and fossil fuel companies across much of the United States, from the Mexican border to Alaska.

Unless the U.S. Ninth Circuit Court orders a temporary halt by mid-March, Oak Flat is destined to be a gaping hole in the ground near a 60-story waste-rock mountain, property of a giant Anglo-Australian company that will pay a pittance in taxes, royalties and local wages.

“This will be our last dance,” Sherlyn Joyce Victor Honda said as her 10-year-old granddaughter, Taylor, shuffled to thumping drums and chants, midway through an 18-hour coming of age ceremony watched by a hundred family members, friends and sympathizers.

“I don’t know what we’ll do, where we’ll go,” she said. Dozens of Apaches echoed that thought among the old oaks where for generations they have stockpiled food for winter, taught their young and prayed to their spirits. Their common message was clear: We don’t matter.

Resolution Copper has tried to acquire the land since 2008. Republican senators slipped a midnight rider into the 2015 National Defense Authorization Act, forcing Barack Obama to start the process, pending a final review during 2021. Trump abruptly advanced the date.

Nizhoni Pike, 20, who studies nutrition on the San Carlos Reservation, 41 miles to the east, worries that the invasion of tribal lands is a death knell for ancient ways that survived despite massacres, forced marches and broken promises since settlers moved west in the 1800s.

“We are going to lose a part of ourselves that can’t be replaced,” she said. “And it’s more than us. If this can be allowed to happen, no religion is safe.” All cultures have their holy rituals, she added, and nearly all are rooted in a sacred place.

She has a point. Eyes closed, hearing rhythmic chanting in a strange tongue, I could imagine the Church of the Holy Sepulchre in Jerusalem or the Great Mosque in Mecca. Looking around, Temple Emanuel in Tucson seemed a better fit. This was an Apache bas mitzvah.

During solemn moments, young Taylor intoned prayers, laid prone on the ground for purification and joined dancers for a circuit around eagle feathers tied a stake. In between, it was a celebration that any Jewish kid with cheek-pinching aunts would recognize.

Two long rows of gifts were lined up on the sand: two-quart bottles of Dr. Pepper, Huggies, bright pink or green plastic pails and such. They weren’t for Taylor; Apaches share among themselves. At one point, kids swooped in to carry them off like party favors.

Wendsler Nosie, Sr., former San Carlos tribal chairman, has fought Resolution Copper for years. His coalition, Apache Stronghold, filed a last-ditch lawsuit in the U.S. District Court in Phoenix. Judge Steven Logan ruled on Feb. 13 that the group, not a “sovereign nation,” had no standing.

Logan’s decision sent grim echoes throughout Indian country. “The exclusive right of the United States to extinguish Indian title has never been doubted,” he wrote. “And whether it be done by treaty, by sword, by purchase, by the exercise of complete dominion adverse to the right of occupancy, or otherwise, its justness is not open to inquiry in the courts.”

Last year, Naelyn Pike, Nosie’s granddaughter and Nizhoni’s older sister, testified to a House committee with convincing detail, reading without emotion from a prepared text. It wouldn’t have mattered if she had belted out “Hamilton.” Few congressmen paid attention.

But in court, she fought back tears, describing the significance of gathering acorns to pound into flour from gnarled ancient oaks imbued with the Creator’s spirit. Following the audio, I could only imagine her face when a lawyer remarked that she could find oak trees in Phoenix.

If the Ninth Circuit Court in San Francisco upholds the decision, Oak Flat, protected as a national heritage site since the Eisenhower administration, will belong to British and Australian shareholders, who will destroy yet more treasured recreational wild country.

Stepping back, the Apaches’ last stand reflects devastating loss across the West, particularly in the twisted Trump Republican politics of Arizona. Mining contributes little to the economy, but it funds politicians who spare scant thought to protecting the people and the land it impacts.

As I drove up at dawn through Oro Valley north of Tucson, NPR reported fresh news linking its state representative, Mark Finchem, to Oath Keepers who stormed the Capitol. In 2019, he sponsored a bill to give Arizona control of federal lands, making them easier to despoil.

I passed San Manuel, where BHP-Billiton of Australia paid $3.2 billion in 1996 to buy a thriving mine from Magma Copper, dubbed Mother Magna for generosity to local communities. It suspended operations three years later when copper prices dipped, then abandoned the mine, leaving fenced-in devastation and a nearby ghost town. BHP is a co-owner of Resolution.

At Hayden, I turned left past the Mexican-owned ASARCO smelter, notorious for stiffing non-union labor and poisoning the air, and then up through once spectacular scenery on Route 177 to Superior. It’s now the Highway of Horror: open pit gashes and raw mounds of “overburden.”

Mining executives say America needs copper more than ever in a wired world moving toward electric vehicles. And, they insist, it is essential to national security. Opposing new mines, the argument goes, is simply the old NIMBY complaint: not in my backyard.

Up to a point. Copper is abundant in South America, Africa and Indonesia, where governments need revenue and jobs. As a strategic material, it is best kept in reserve underground for future needs. But companies prefer America, with infrastructure, friendly officials and no royalties.

With few smelters in the United States, foreign operators ship ore concentrate to Asia, where its value increases as finished copper. Profits go elsewhere, and Americans are left with the mess.

U.S. authorities slapped sanctions on Gertler in 2017 for gross corruption, blocking his access to banks and freezing his assets in America. He fought the measures hard, hiring Alan Dershowitz, a Trump favorite, to represent him. Days before Joe Biden took office, Treasury Secretary Steve Mnuchin quietly released Gertler’s assets and gave him a year to deal with banks.

The San Carlos Apaches’ suit, backed by other tribes, is not about money or the environment. Other faiths have multiple churches, mosques or temples. They have Chi’chil Bilagoteel. Oak Flat.

After speaking with Nizhoni Pike, I met Curtis Pemberton, her boyfriend, who took the conflict to a broader plane. Like two-thirds of American Indians, he grew up off the reservation and moves seamlessly between two cultures.

Had American settlers worked out peaceful co-existence with Indians who understood the land they lived on, he said, both could have cooperated to thrive sustainably. At the very least, they would not have fragmented tribes into squalid pockets, bitter at serial injustices.

In a hoodie, barely bronzed in the Arizona winter, Curt might be of any melting-pot mix. But he is Chiricahua Apache, with bloodlines to Cochise and Geronimo, whose tribe was forced from its dramatic mountain redoubts to end up at San Carlos, barren flatlands far from any town.

Curt laughs off the old Jean-Jacques Rousseau fantasy of noble savages. Like all human cohorts, some Indians are bigoted, corrupt and hostile. Most are not. As divisions deepen in an America facing crises that cross ethnic lines, he said, it is time to coexist as equals for everyone’s benefit.

He moved to the reservation to be with Nizhoni, and, at 22, he is studying diesel mechanics. Fascinated with France, he beamed at an invitation to come see the clunky old engines that power the boat I live on in Paris. He probably won’t make the trip.

With few jobs on the reservation, Curt and Nizhoni may have to work elsewhere and, as tradition demands, help extended families make it through hard times. But both are deeply rooted to the new tribal homeland, which someone long ago dubbed “Hell’s 40 Acres.”

“Whatever happens,” Nizhoni told me, “when I’m an old lady I want to bring my grandkids to Oak Flat to gather acorns and say prayers to the Creator the way my grandmother did with me.” She glanced wistfully at the tepees and campfires, likely to be off-limits within weeks.

Just then, the drums began beating again. With practiced dance steps, she and Curt moved off arm to arm back to the 19th century for a last dance at Oak Flat.

Global Geneva contributing editor Mort Rosenblum is a renowned American journalist, editor and author currently based in France and Tuscon, Arizona. He has travelled and reported the world more years than he can remember. You can read his regular column, The MortReport.