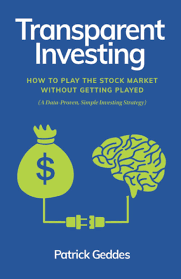 Patrick’s only partly joking. Co-founder and former CEO of Aperio Group, a pioneer in custom index equity portfolios delivering tax optimization with $42 billion under management at the end of 2020 when it was acquired by BlackRock, Patrick in “retirement” has published his lessons for ordinary consumers as “Transparent Investing: How to Play the Stock Market without Getting Played”. It’s available in an Amazon Kindle version for only $3 or so.

Typically, Patrick has promised: “All net proceeds from sale of the book [as well as speaking income] will be donated to support financial education at the nonprofit Consumer Federation of America.” His website, https://patrickgeddes.co, offers free resources, such as a chapter from his book on whether to hire a financial adviser, case studies, a portfolio organizer, and recommendations for the best investments right now. “Chances are the top choices are the same today as they were yesterday and will be tomorrow,” he says. But he lists five reliable and low-cost mutual funds “to own now and in the future”.

“I’m the kind of guy who believes in numbers and research,” Patrick says. “I get apoplectic when I see falsehoods getting spread, and it makes me want to stir up trouble when I see the need for it.” His father called him a “dung disturber”. “OK, he used more colourful language,” Patrick admits.  So he found himself being interviewed by Meb Faber for the 400th episode of Meb’s investing broadcast (LINK) as a pioneer in the financial indexing world.

Patrick reveals that he spent five years working for Amoco oil company, now part of BP, and planning to get a PhD in finance, when he was connected with Morningstar to carry out research. Despite his protestations that he was not an econometrician, Patrick was hired as head of research. Eventually he became Chief Financial Officer. But what interested him was calculating investment earnings after tax, rather than simply percentage returns on investment, which very few analysts bothered with at the time. “There’s a simple answer on why no one cared about it,” Faber said, “because it’s not the sexy part.”

In 1997 Patrick moved back to his home state of California. “I was teaching portfolio theory at University of California, Berkeley Extension program. And I’d set [up] a small — emphasis on small — consulting practice on the side,” Patrick reports. Then he met his Aperio co-founder Paul Solli. “We actually never formally decided to start a company,” Patrick remembers. But he found himself working with clients particularly on their risk, environmental, social, and governance issues, which few others were. “This feels like a very 2022 conversation,” Meb Faber commented. “But you were doing it 25 years ago.”

Patrick and Paul registered Aperio, after a Latin verb that means make clear or reveal the truth, in the summer of 1999. But it took 4-5 years to take hold. When people asked him how the business was going, Patrick responded: “Well, we’re too much of a success to be labelled a failure, but we’re too much of a failure to be labelled a success.” He adds: “It was limping along. We all had side jobs. I mean, we did this with no capital, ours or anybody else’s.”

But come the financial meltdown of 2008 and 2009 in the United States, Aperio took off. “I think at the end of 2011, we were like $2 billion and then grew that to 42 billion by the end of 2020. In a way, we had some foresight. In another way, we were just fortunate to be standing in the right place.”

They sold the business to BlackRock when they approached retirement age, and the COVID pandemic hit as Patrick was preparing to write his book as “payback” for his luck. “It was convenient in the sense of, if you’re going to work that hard to do a book when you’re working full time, you don’t want a lot of other distractions. And as everybody knows, like, a lot of those fun distractions in life disappeared for quite a while.” But he was still working fulltime until about May 2021. “I’d get up early and work weekends.”

A book that is different and plain-speaking

Patrick wanted his book to be different and plain-speaking. “I’ve not seen anyone blend all the research in behavioural finance with all the research on how, what an atrocious track record [you see from] active management, on both security selection and the asset allocation, market time and market-beating behaviour. They’re just awful. They’re not like a little thin: it’s so overwhelming. So that [part] was fairly clear and, within the pro indexing camp, well understood.

“The piece I hadn’t seen was the brain is such an important component and the way it’s evolved, and the way in which it’s actually very inefficient […] making poor decisions.”  As he puts it in the book: “Unfortunately for us all, our brains have evolved in ways that tend to make us poor investors. We make bad decisions about money not because we’re stupid, but because, as the data show, we’re anything but rational when it comes to investing.”

With acknowledgements to many others, Patrick tries to convince starting investors that they can’t beat the market – and neither can their advisors – except on a short-term basis. He describes the temptation as going for the chocolate cake when we all know broccoli is healthier – an analogy he invented then discovered someone else had used it before him.

“Risk and return reflect two conflicting emotions driving investment behaviour: fear and greed. However, wealth advisors avoid these latter terms for a couple of reasons. First those terms don’t sound like they’re grounded in scientific methodology. Second, these emotions have negative connotations,” he notes. One result: “a 20 percent drop in a portfolio triggers two to three times more suffering than a 20 percent increase produces elation.”

His message: “As Morgan Housel argues in The Psychology of Money, it’s good behaviour, like sticking to your guns in a rough market, that provides the key to successful investment results, more so than good analysis. Women tend to achieve slightly better investment outcomes on average. The reason for this? Men tend to have more unfounded confidence in their abilities. (I imagine this won’t be shocking news to women anywhere.)”

If you want to use behavioural finance to decide your investments, you’d do better “looking in the mirror and learning how to avoid your own worst tendencies,” as a psychology-trained financial professor advised, Patrick adds: “Your brain is hazardous to your wealth.”

But with his usual modesty, Patrick reports: “In 2009, during the worst of the crash, a client asked me how I managed to not sell out. I responded — somewhat sheepishly — that while I’d prefer to think that all my experience with risk had given me the discipline to ride things out, the fact was that selling out would mean I was a complete hypocrite. After years of offering clients advice on how to persevere during a downturn, I had to take my own advice. In that way, my self-image helped save me from selling out myself (and, by consequence, selling myself out).”

“The average expert who tries to outsmart the market usually proves more effective at outsmarting their clients,” he argues. An investor in the S&P 500 would do better than most active traders, even mutual funds. “A Morningstar study of market timing by mutual funds found that from 2003 to 2018, the average tactical-allocation fund (active) returned 3.4 per cent per year, while the static (passive, or no market timing) Vanguard Balanced Index with the same overall risk returned 6.6 per cent, a whopping victory for passive asset allocation.”

His fellow investment managers get short shrift from Patrick: “The investment industry has evolved to encourage some of your worst instincts because it makes us more money. The investment industry blends helpful advice with self-serving recommendations. While we can help clients manage risk and earn higher returns, we don’t do it by our predictive abilities.”

The financial press largely leaves him unimpressed: “It’s unlikely you’ll ever see a headline like “Here Are the Investments You Need to Own in Today’s Market: The Same Boring Index Strategies We Told You About Last Year and the Year Before,” he writes. “(You can sense how misleading I find most marketing. At my firm, the staff joked that if I were in charge of marketing for a fancy sushi restaurant, I’d come up with the tag-line “Hey, you want to buy some cold, dead fish?”)

Patrick gives credit to his parents for his no-nonsense attitude to investing: “My parents displayed rebellious tendencies even as they both attended divinity school, where they met. During the 1960s, my father participated in the civil rights movement, getting arrested with the Freedom Riders in Mississippi in 1961, rebuilding a Black church burned down by white supremacists in 1964, and marching with Martin Luther King, Jr. in Selma in 1965. My father would observe the same provocative tendencies in his children.”

So it might be no surprise, but very useful for someone trying to educate themselves about the stock market, to read his critical comments as an expert statistical analyst on the S&P500 as a guide to investment: he recommends the Russell 3000. He offers several self-help pages to enable investors to judge how much they should be putting into stocks, bonds and other assets. Indexing may be the coming thing these days, accounting for over 50% of U.S. equity mutual funds in 2019, but back in 1998 the proportion was only 13%.

Along the way, he offers numerous tips – and it’s a book that tempts you just to quote and quote from it, since what he says is so sensible and clearly phrased:

—  “What doesn’t make sense is trying to assess whether the stock market looks overvalued or undervalued at any particular moment in time and adjusting your asset allocation accordingly.”

— “Investors [seeking to change their declining investments] are likely learning that their risk tolerance isn’t as high as they’d presumed during calmer times. In effect, therefore, they’re saying that they need a permanently safer asset allocation given their own behaviour, which I view as useful self-knowledge,” Patrick says.

— “With indexing you do run the risk of not making it into the very narrow group of active managers who may actually beat the market, but with active, you run the risk of finishing at the bottom of the heap [80-90% of them].”

How long will you need to monitor your investments once you set up your simple portfolio of index funds? “A couple of hours every one or two years. Many people react with shock when they hear how little time I recommend spending on feeding and caring for their portfolio, but staying on top of market news, research, and new developments just doesn’t provide enough value to make all that work worthwhile.”

“When you add in all the expenses, active [investing] costs a lot more on average than passive, thus proving that even without researching historical returns, we can safely state that the returns of all active investors after expenses will be less than the returns of all passive investors. This absolute truth tends to horrify active asset managers when I point it out.”