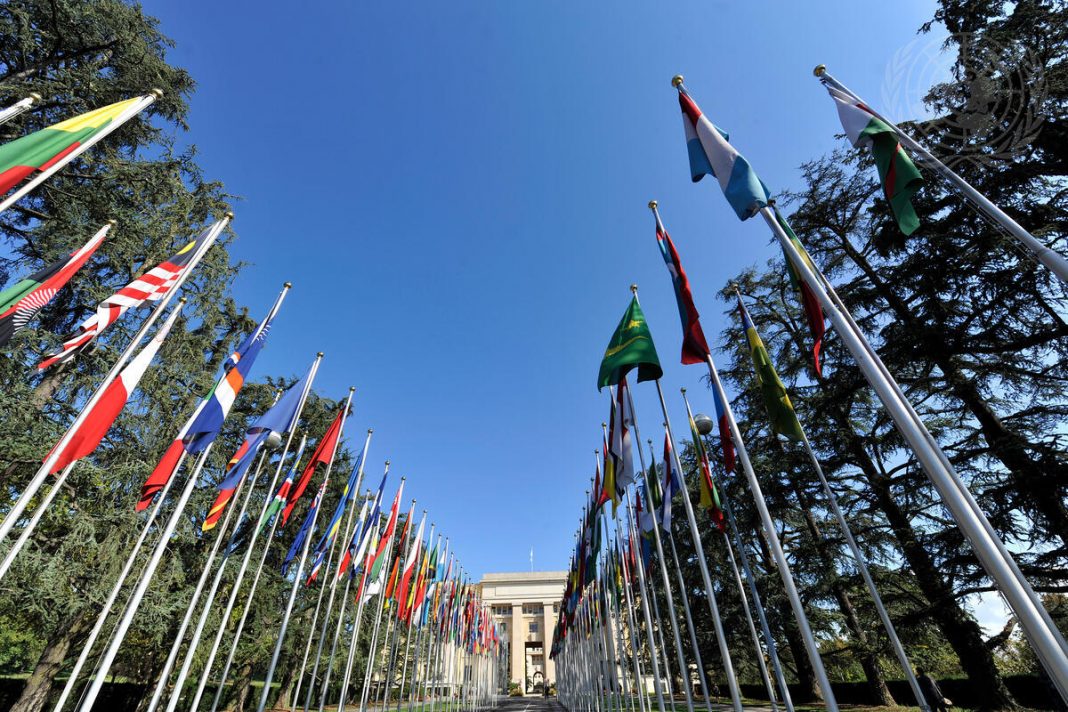 Quality journalism initiatives should be automatically included in any serious discussion about corporate engagement.

The premise is excellent. Bring together what the organizers refer to as the ‘right’ bank of the Rhone River, where the public sector such as the United Nations and civil society are located, and the financial institutions on the ‘left’ bank, many of which overlook where Lake Geneva turns back into being a river before flowing through France and emptying out into the Mediterranean. Together these two vastly different groups need to collaborate in their efforts for dealing with key ‘international Geneva’ themes linked to sustainable development.

The task of preserving our planet, the Building Bridges organizers argue, should no longer be in the hands of the international organizations and donors alone, but society as a whole, particularly the private sector. Hence the urgent need to “build bridges” between these main sectors. (See Geneva Solutions article by Edward Girardet: http://International Geneva: missed opportunities, new possibilities).

As Patrick Odier, the Geneva banker and president of Building Bridges (now in the process of becoming a foundation), noted: “This will encourage Switzerland to embrace a more international role for dealing with sustainable development.” Advocates such as Odier are also pushing Switzerland to host the 2026 COP conference on climate change. The 2022 COP27 gathering is being held this November in the Egyptian coastal city of Sharm-el-Sheikh on the Red Sea. (See Global Insights article on threats and solutions facing the Mediterranean)

One of the scheduled key speakers at this year’s conference was Washington’s climate guru, Al Gore, but also WWF International’s Margaret Kuhlow who considers the role of private finance as crucial for preserving natural resources. Another was Emmanuel Faber, the former CEO of Danone, the Paris-based global food company, who is in charge of the ISSB (International Sustainable Standards Board) for ensuring that businesses keep track of their impact on the environment. Speaking, too, was Dr. David Nabarro, a special envoy of the World Health Organization on COVID19 as well as an ardent advocate for food security. Without food security, he argues, there cannot be any effective health. This is where the private sector needs to become far more active in helping to find solutions.

As Odier points out, there is an increasingly strong desire of international businesses to become more engaged. “People are willing to reflect and to engage,” he said.

From Billions to Trillions

This is emphasised by the diverse 70-odd conferences, workshops and SDG Labs being held this week, such as Shaping Relationships between Banks and Philanthropic institutions; The Climate Crisis: The Economic Opportunity of the 21st Century; and, last on the agenda this week, Billions to Trillions – The Financial Opportunity of Building the Digital Bridge.

Organised by Equity4Humanity with the Geneva Centre for Security Policy, this latter Billions to Trillions panel seems to encompass what Building Bridges is all about. It will cover three unusual systems’ projects focusing on climate rejuvenation, agriculture and cities by highlighting openly collaborative systems that offer the opportunity to completely transform the financial paradigm for development.

These are all topics that clearly require more debate, but also better reporting in the public interest. Unless general audiences are informed, then the message won’t get out. One only need look at the entrance area to Geneva’s International Conference Centre. The hall is lined with billboards and QR codes proclaiming the role of banks like Credit Suisse, UBS, Odier, HSBC, Barclays and others in supporting sustainable development, the environment, nature, reforestation, water, farming, fishing, health, tourism, and climate coping mechanisms across the globe.

These banks all represent a very long list to grab one’s attention. Many, too, stress that they are working closely with institutions such as the UN Development Programme, UN Environmental Programme and various NGOs. Evidently, such collaboration is imperative for any form of corporate engagement to cultivate their pedigree in sustainable development.

An urgent need to include credible reporting in the public interest

Yet how much of this is PR, and how much is credible support for humanity? As one British consultant working for a Geneva financial firm at the conference admitted: “The behaviour of certain financial institutions in Switzerland has not exactly helped our cause. I think that a lot of our us are very serious about what we are trying to do, but it only takes one bad egg to splatter our faces.”

Others, too, note that financial institutions tend to be very keen about highlighting their engagement but become nervous when posed too many awkward questions. They don’t like discussing issues such as lack of transparency, greenwashing, corruption or whistleblowing. Given the alleged activities of certain institutions, such as Credit Suisse, for stashing billions of illicit funds, it is often very hard to take them seriously. Nestle, Barclays and Shell are still tarnished from long past incidents such as the baby milk formula scandal or sanctions-breaking in South Africa of the 1970s and early 80s.

For these and other reasons, it is a pity that this year’s Building Bridges conference has once again failed to place an emphasis on the role of credible journalism in the public interest. Only with good reporting can one ensure that both riverbanks do their jobs properly, remain accountable, and are not simply embracing “look good” images.

Quality journalism initiatives should be automatically included in any serious discussion about corporate engagement with sustainable development. Simply partnering with The Financial Times, an excellent newspaper but with a firewall enabling only subscribers to access its content and thus keeping out the bulk of potential audiences, is not enough. International Geneva needs to involve local and international journalists worldwide.

Unfortunately, too, Building Bridges has no media workshop inititiaves, such as YouthWrites, aimed at engaging young people. Why not help them to better grasp why the private sector has the potential for making a huge differene remedying some of our planet’s woes? Whether young or old, regardless whether in Switzerland, Thailand or Botswana, populations need to be properly informed not only about what such conferences are seeking to achieve, but the issues they represent. All the topics highlighted at Building Bridges are planetary concerns that implicate everyone. (See WIKI Centennial multi-media Mediterranean initiative)

As we are all aware, quality journalism is in crisis. Many media and independent journalists simply no longer have the financial means to report properly. This is where both Building Bridges and Switzerland should take the lead.

The key for better reporting lies with enabling journalists across the globe to report the issues highlighted by International Switzerland’s exceptional knowledge hub properly, whether through support grants, fellowships and organized reporting trips during key conferences. But such support should be provided not just by government donors, including Switzerland (Presence Switzerland, for example, whose taxpayer funds would be far better spent on quality journalism than Swiss chalets at international exhibitions), but also foundations, private corporations and concerned individuals.

For their backing to be effective, however, they need to respect that such coverage has to be completely editorially independent. As readers of the Financial Times and other quality press, many of the Building Bridges participants fully understand that only reporting that is trusted – unlike PR posing as public information – has credibility. The problem is that many remain hesitant about including media in their support portfolios. This needs to change.

As Gian-Andri Casutt, head of communications and member of the advisory board at ETH in Zurich, has noted, institutions, including his own, should consider setting aside part of their budgets to support more informed reporting of health, scientific and other issues, including the SDGs. Banks and other private sector enterprises should do the same. “We fully realise that there is an urgent need for this and we all need to contribute,” said Casutt. As both he and others maintain, incidents such as Covid have only underlined the importance of more appropriate journalism to counter misinformation, false perceptions and even conspiracy theories which can cost lives and billions of dollars’ worth of wasted resources.

If the Swiss as well as corporate sponsors of Building Bridges wish their work to become known amongst broader audiences worldwide, the issues they represent will need to be properly covered, particularly from the field. But for this to happen, much will depend on whether credible media will have the financial means to do so.

Edward Girardet is a foreign correspondent, author and editor of the Geneva-based Global Insights Magazine. He has covered wars and humanitarian crises worldwide for The Christian Science Monitor, US News and World Report and the PBS Newshour. His books include: “Afghanistan: The Soviet War”; “Killing the Cranes – A reporter’s journey through three decades of war in Afghanistan”; “The Essential Field Guide to Afghanistan”. (4 fully-revised editions) and “Somalia, Rwanda and Beyond.” Girardet is currently working on a new book, The American Club: The Hippy Trail, Peshawar Tales and the Road to Kabul.

EDITORIAL NOTE: Global Insights relies on public SUPPORT to operate. Together with other partners, were are now launching the WIKI Centennial Expedition: A multimedia venture to Help Save The Med. Over the next three years, our international and diverse reporting teams will seek to highlight the threats – and solutions – affecting the Greater Mediterranean Basin. We are seeking sponsors, partners and knowledge institutions – as well as interested interns and volunteers – wishing to take part in this unique reporting initiative in the public interest.